While plenty of other neighborhoods lining the outskirts of Downtown host their own Victorian collections, Angelino Heights is unique for its level of preservation. Like other Victorian strewn neighborhoods, for example West Adams and University Park, Angelino Heights experienced a decline as its originally affluent residents fled for the burbs. According to historian Eric Brightwell, this occurred after World War II—the Victorian homes proved "too expensive to maintain" for new residents, and homes fell into disrepair, were subdivided into apartments, and some were converted into hotels. Then, in 1954, the "construction of a stretch of the new 101 Freeway saw some of Angeleno Heights destroyed." But things eventually turned around.

Angelino Heights was saved to the annals of redevelopment in 1983, when it became Los Angeles' first officially recognized historical district. The Historical Preservation Overlay Zone requires homes be well maintained, and that any modifications are conducted with concern for a building's architectural context. The result is an eclectic neighborhood with prime examples of chiefly Victorian and Craftsman architecture from the late 19th and early 20th Centuries, set against the cosmopolitan backdrop of Downtown L.A.'s skyline. Some homes are still in disrepair—one from a fire, and others—at least this is what we've been told by some residents—are kept in a more deteriorated state for the purpose of filming. And of course, holding beautiful visage in Los Angeles means you're ripe for the silver screen. 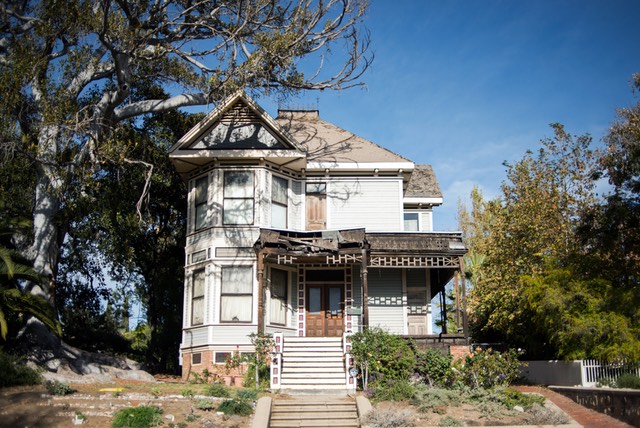 The neighborhood has been featured in countless films and television shows, dating back to some of the more classic noir flicks like Chinatown. The movie's Echo Park murder actually took place in an Angelino Heights home on Kensington Road. Michael Jackson's "Thriller" was also filmed a few blocks to the south at 1345 Carroll Avenue, also known as the Sanders house (built for a local warehouse operator Michael Sanders in 1887). The home has been falling apart for many years.

More recently, the neighborhood was featured in Mad Men, as the setting for Don Draper's childhood home, which was a brothel. And Bob's Market (1230 Bellevue Avenue)—originally a tailor shop when it opened in 1913—appeared in The Fast And The Furious as Toretto's Market.

Angelino Heights makes for an easy visit, sitting just off the 101 freeway (which bisected the neighborhood when it was built) between Echo Park and Downtown L.A. The L.A. Conservancy offers walking tours of neighborhood once a month on a Saturday.