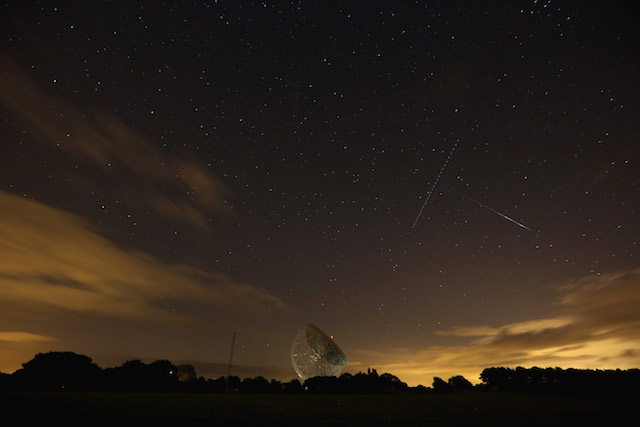 For the first time in a decade, we'll be able to see all five planets in one glance at the sky with just the naked eye.

Yes, we're looking at you Mercury, Venus, Saturn, Mars and Jupiter. Four of the planets besides Mercury have been visible in the sky for the some time now, but soon we'll also be able to see Mercury. While Mercury will theoretically be visible in the sky starting on January 20, Griffith Observatory's Astronomical Observer Tony Cook tells LAist that it won't be bright enough to see with the naked eye until January 23. Starting then, you can see all five planets together in one glance for the next month. He suggests the best time to view it will be about half an hour before sunrise, starting around 6:15 a.m. to 6:30 a.m., and you can do it just by standing outside. There's no need to drive up to the top of some mountain.

Cook says you'll be able to spot all five planets spanning across the southern part of the sky. Here is the order of planets you will see going from east to west. We start at Mercury, which is just a little north of southeast. Next to Mercury is Venus, the brightest planet (and also the third brightest thing in the sky after the sun and moon); then Saturn, which has a golden color; then to the south you'll see Mars with its reddish color; and high up in the southwest is Jupiter, the second brightest planet.

And the way you can tell stars apart from planets is that stars will appear to twinkle, and planets not as much. Since planets have a steadier light than a bright star, the movement of our atmosphere doesn't affect them as much, Cook says.

While most of the planets move slowly, Mercury's a little different because it orbits the sun every 88 days, he says. "The time, the way it's angled, we can watch it for a whole month. The biggest change over the next couple of weeks is that Venus and Mercury will look closer together...Then Mercury will drop out of view."

As time passes, Venus will follow Mercury and drop back near the sun, and it won't be visible by March in the morning anymore. However, as for Jupiter itself, it's coming up earlier every night, and we can start seeing it at 9 p.m. and then it will go higher up in the sky.

Cook says that all the planets orbit in the same plane and all look aligned in the sky, but it is unusual to be able to see them all in one glance. "They're not super close to each but they do form a nice line that's easy to see in the morning."

EarthSky reports that the last time we were able to see all five planets simultaneously was from December 14, 2005 to January 15, 2005.