Videos: Tyrese Has A 'Backyard Benihana' And Aziz Ansari Tried It 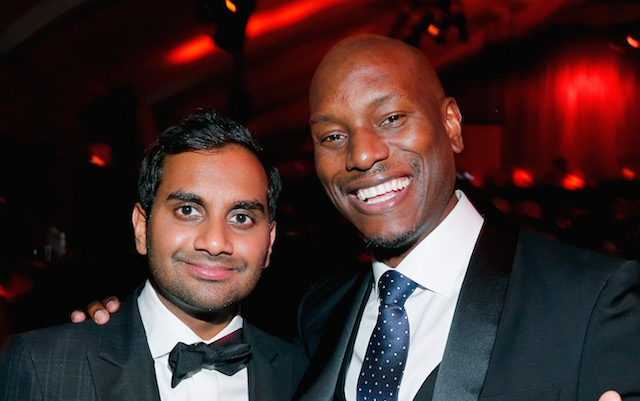 Aziz Ansari just proved to us that sometimes dreams really do come true, like the dream of eating at Tyrese's Benihana-style restaurant in his backyard dubbed "GibsiHana'."

Yes, actor Tyrese Gibson really does have a private teppanyaki restaurant built in his backyard in the Valley. It even has its own dedicated Facebook page, and a tranquil Japanese-style building complete with a menu and a chef. And on Monday night, Aziz Ansari celebrated his brother Aniz Ansari's birthday along with the guys from The Lonely Island at Tyrese's GibsiHana'.

It looked like the best birthday party ever to say the least. Here's the crew singing along to Ace Hood’s "Bugatti."

Tyrese Instagrammed the same video accompanied by the caption, "My backyard looks like a them park ride!!!!! #GibsiHana too epic...... A night to remember....... "

A few years ago, my brother notified myself and @thelonelyisland that @tyrese had built a private Benihana restaurant at his home. Last night, @tyrese made our dreams come true and we celebrated @thecarolinagentleman's birthday at the one and only - GIBSIHANA!!!! TO BE CLEAR - THIS IS NOT A BENIHANA. THIS IS A RESTAURANT IN @TYRESE'S BACKYARD. IT IS AMAZING. (Video by @davidcho)

Aziz Ansari had been asking Tyrese for a very long time to visit his restaurant. Here's a tweet from June 2013:

Ok @Tyrese, so @TheLonelyIsland and I are dying to eat at GIBSIHANA'S. Can we make this happen after you finish the #TGT tour?

And even Aniz Ansari, who also was a writer on his older brother's Master of None series, discussed his obsession with GibsiHana' in an interview with Fast Company last December:

It was also in emails with [Andy] Samberg and his cohorts in the comedy collective, The Lonely Island, that Aniz's sharp sense of humor found a worthy source of inspiration. He'd begun an epic email chain about actor/singer/philanthropist Tyrese Gibson, who goes by the inexplicable Twitter handle, VisionImplementer. Aniz wrote long, detailed analyses of what Gibson chose to do with his money—building a giant replica of a Benihana in his backyard, for instance, which he actually dubbed Gibsihana. Samberg and The Lonely Island crew couldn't get enough.

"Andy was one of the guys who told Aziz and also told me that I should just start writing because I'm wasting my time doing all these Tyrese emails and I should probably do something a little more constructive with it," Aniz says. "But I am not opposed to still writing about Tyrese, and if Tyrese ends up reading this—if he wants to reach out to me to write stuff for him—I'd love to connect and go to his home in the Valley and eat at his Benihana."

GibsiHana' goes way back, too. The restaurant's Facebook page launched in 2012, though it hasn't been updated since then. The profile picture shows a smiling Tyrese with Vin Diesel, Paul Walker, Will Smith and Willow Smith eating together at the joint:

And then in 2014, Tyrese posted a YouTube video giving a tour of GibsiHana', showing his restaurant with the letters "GH'" embedded into the concrete. "I'm going to roll this out to a real franchise," he says in the clip. "That's my goal this year." There's a glimmer of hope for all of us to get a reservation some day.