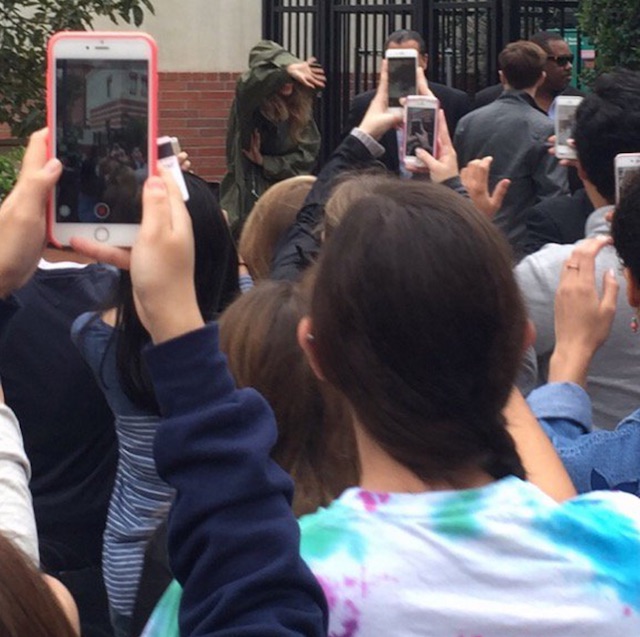 Beyoncé was spotted on the USC campus today, supposedly practicing for her upcoming Super Bowl halftime performance. As you can imagine, students completely lost it when they saw Queen Bey.

Here are her legions of fans screaming at a high-pitched decibel.

Dillon McKinley, a freshman at USC, told LAist that the Beyoncé sighting took place on campus today around 2:15 p.m. at the John McKay Center for athletics. She got there along with hundreds of other students after word spread that the "Crazy in Love" singer was supposedly practicing for her Super Bowl performance. McKinley writes:

A few of my friends and I went out to where she was supposed to be exiting after rehearsal, and we found a black Escalade with tinted windows and three men in suits (obviously bodyguards), standing around a back door to the McKay center. There was a crowd of about 100 at this point in a half-circle around the car with their phones out ready to snap a picture if given a chance. A few minutes later, the bodyguards began to prepare to escort Beyonce from the door to the car. The door swung open, and the crowd now numbering roughly 300 surged forward. Beyonce emerged from the door with a few bodyguards surrounding her and she waved to the crowd and attempted to cover her face. She got into the car, slid to the side near the window close to the crowd, and then opened the door momentarily, the crowd screamed, and then it shut quickly, and the car pulled away.

LAist reached out to USC's Department of Public Safety Deputy Chief David Carlisle for comment, but have not heard back at this time.

Others also posted videos and photos of Beyoncé on campus:

WHEN BEYONCÉ USES THE GYM AT YOUR SCHOOL 💪🏽💕#blessed

Beyonce emerging from USC to enter her car!!!!! #beyonceatusc she waved and smiled at us 😭 pic.twitter.com/JIXsb3Zb4q