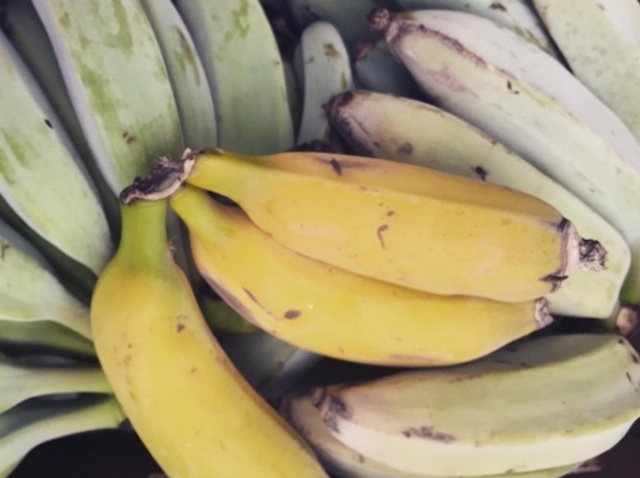 If you've been searching for a delicious, locally grown banana at the farmer's market, congratulations, your nearly two-decade wait is finally over.

The Ventura County-grown bananas recently made an appearance at the Santa Monica farmers market after an 18-year absence, reports the L.A. Times, and more are on their way. Grown by first-time farmer Andy Sheaffer of Vista Punta Gorda ranch, these are not your typical grocery store Cavendish variety of banana. We're talking about flavor-packed heirloom varieties such as the apple-like flavor of a Brazilian dwarf, and the vanilla notes of the blue-hued (and awesomely-named) Ice Cream banana.

At the market last Wednesday, Sheaffer was selling four of the eight varieties he's growing at the ranch. And the tree-ripened, bright yellow bananas sold out in 30 minutes, according to the Times, leaving the remaining green ones for stragglers. People are excited about these bananas, to say the least.

@smfms is the best farmers market in the world because Laura Avery and the crew go to great lengths to satisfy chefs and customers with the most newest most innovative foods available on the market! Let's give a warm welcome to the newest farmer Andy Sheaffer of Vista Punta Gorda Ranch and his #bananas! 🍌❣ #smfms #SantaMonica #santamonicafarmersmarket

Seaside Banana Gardens—considered the first banana farm in the continental U.S.—once sold nearly 60 varieties of locally grown bananas through the 80s and 90s at markets and a roadside stand by the 101. But in 1995, owner Doug Richardson stopped selling at markets after mudslides flooded part of his farm. And in 1999, he vacated the property, six years before another slide wiped out more of the farm and killed 10 nearby residents. In 2008, Sheaffer—who has a background in erosion control and hillside stabilization—bought the property and has picked up the torch, now farming eight-acres of bananas.

"You can grow bananas almost anywhere as long as it doesn't freeze," Sheaffer tells the Times. "But to get it to produce fruit regularly and thrive — that's the big challenge in our climate."

To get a taste of these local bananas, head to the Santa Monica's market on Wednesdays at Arizona Avenue and 2nd Street and at the Main Street market on Sundays. More info here.