Sixth Street Bridge Demo Begins In February & Will Shutdown The 101 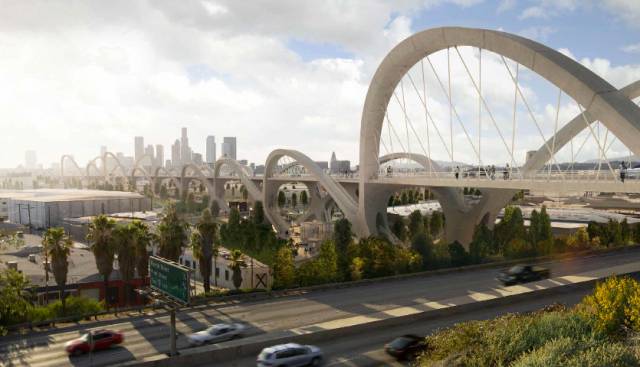 Rendering of the new bridge over the 101. (via Sixth Street Viaduct Replacement Project — more here)

The 101 freeway will close for almost two days in February, as the Sixth Street Viaduct demolition begins. Officials announced the 40-hour closure yesterday, just a few days after delays on the project were reported. This portion of the demo is expected to begin around 10 p.m. on Friday, February 5th, and will shut down that section of the 101 through Sunday the 7th.

LAist called up the city's Bureau of Engineering, and were told that the previously reported January demolition date was erroneously publicized by a city council office. Apparently the BOE never had a firm date to start with, and is now moving ahead with a scheduled February demolition. El Niño could have an effect on the demolition when the time comes, as it's challenging to take apart a bridge when the river beneath it is a rushing torrent of storm run-off.

This is all happening because the 84-year-old viaduct is slowly crumbling—thanks to a rare chemical reaction in the cement supports that make it particularly vulnerable to earthquakes—and needs to be demolished.

Since the structure is partially over the 101, the roadway will need to be shut down during this process for safety reasons. The shutdown will affect the section that it passes over—from "the interchange with the 10 Freeway, near Union Station, to the interchange with the 5 Freeway south of downtown," according to the LA Times.

Recommended traffic detours are as follows, but it may be easier just to get off on one of the area's surface streets, instead of driving all the way around on the 710 (via Sixth Street Viaduct): 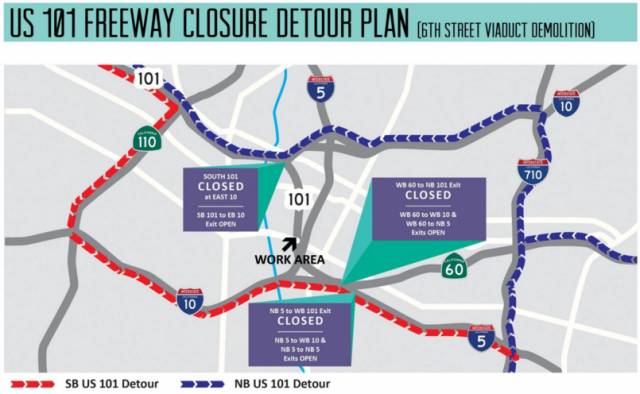 When traveling N/B 5 from the Orange County area approaching the 5/10/101 Interchange:

When traveling W/B 60 from the Pomona area approaching 5/10/101 Interchange:

When traveling S/B 101 from the San Fernando Valley area approaching the 10/101 Split:

101 Freeway On-Ramp closures will be as follows:

Once that's all done, the new $449 million replacement will be constructed... for the next three years. Expect detours and delays with that, too.