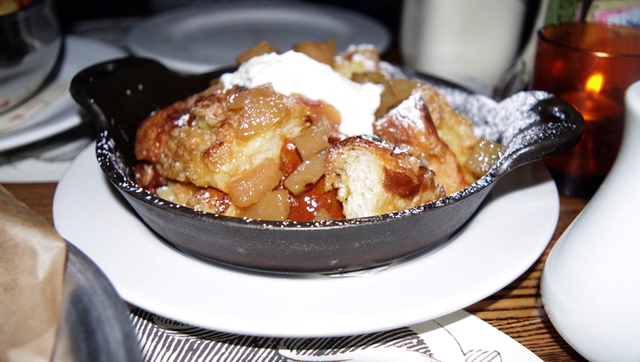 Nighthawk Breakfast Bar is a brand new spot tucked off of Hollywood Blvd. that offers spiked cereal milk and some late-night twists on the most important meal of the day.

The bar and restaurant will officially open tonight. It is the newest concept from Jeremy Fall, who previously brought us Golden Box and Genesis, the latter of which will reopen in a new spot on January 29.

Nighthawk, so named after the Edward Hopper painting, can be found by ducking down Las Palmas, away from the bustle of the boulevard, and entering via an unmarked door. Soon, you'll find yourself in a charming little space dedicated to breakfast, conversation and booze.

"I know it may seem a little paradoxical to serve breakfast at night with cocktails but I really think it works," Fall told LAist. "My goal is to create a place for people to congregate, somewhere that feels intimate yet busy at the same time, a place that feels like there's passion, quality and thought behind everything without the excessive price tag. A place where you might be sitting at the bar and end up actually sharing a conversation with a complete stranger that's not just trying to sleep with you." 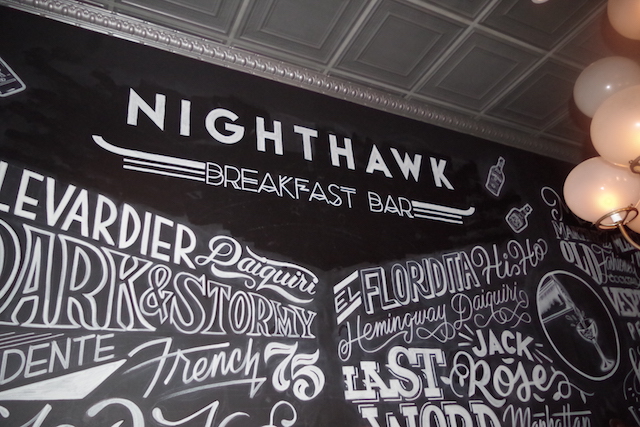 Upon arrival, guests will be offered a cup of joe and a rolled-up newspaper. This is particularly helpful for those ramping up for a night out, or those who need a little sobering. The menu, designed by Chef Greg Schroeppel (Spago) consists of decadent, meaty breakfast items, as well as a few lighter, healthier options. If you're particularly hungry, we suggest the sausage breakfast sandwich made with housemade pork sausage topped with fluffy scrambled egg, gruyere cheese, arugula and three peppercorn aioli on a soft pretzel bun ($13). There's also the Benedict Fries—that's a happy mess of hand-cut fries topped with ham, peppers, raclette cheese, smoked paprika, hollandaise sauce and a fried egg ($12)—great for sharing. If you're feeling particularly decadent, you can also get a tower of candied bacon for $8. On the sweeter side is the Drunken French Toast that drenches cubes of challah in pear brandy and red pear compote, topped with a mascarpone mousse and maple syrup ($12). A lighter choice lies in the Veggie Benedict which consists of a quinoa patty, scrambled egg whites, tomato confit, avocado and hollandaise ($12). 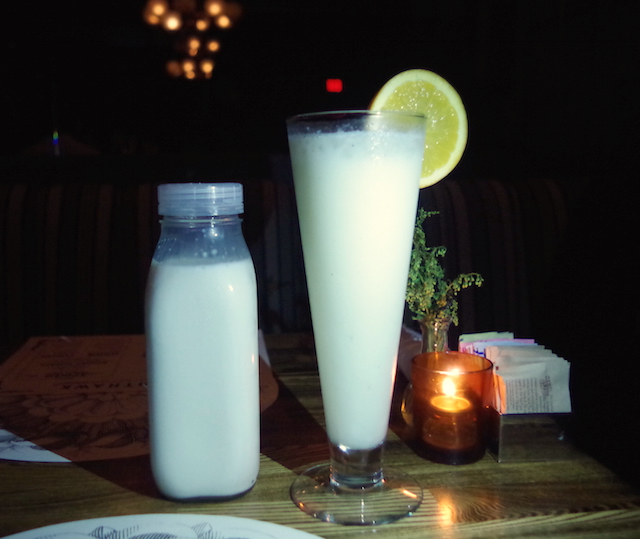 Cocktail-wise, Schroeppel and beverage director Giovani Martinez have a selection of milky and coffee-rich drinks that, bizarrely enough, work. Their spiked cereal milk is particularly interesting. They come in old school-style milk bottles that really do taste like you're drinking cereal milk. There's a fruity gin, a chocolate brandy and a honey nut bourbon option ($12). We're big fans of the honey nut option. You can also score a boozy float, an Irish coffee or an alcoholic spin on an Orange Julius. The OG takes orange juice, gin, milk and vanilla and somehow manages to make an easy-to-drink elixir that really does taste like that mall favorite ($14). For the lactose intolerant, Nighthawk also has a full bar, so don't feel confined by their signature items.

You can expect DJs to spin old-school hip-hop, classic rock and '90s alt rock, and you're more than welcome to make a request.

For now, Nighthawk is only open on the weekends, and you'll want to get there early as the 80-person space does not take reservations.

Nighthawk is located at 1638 N. Las Palmas in Hollywood. Open Friday and Saturday nights from 10 p.m. to 2 a.m. starting January 15, with expanded hours to follow.