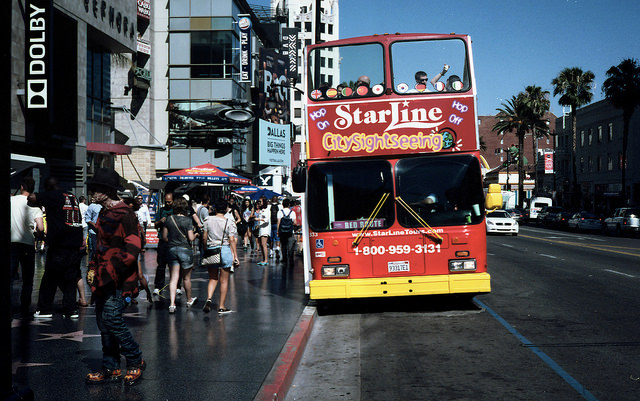 Celebrity homes tour, anyone? (Photo by Edward Conde via the LAist Featured Photos pool on Flickr)

Tourism in Los Angeles is on the up and up, and besides a normally very crowded Hollywood Walk of Fame, it's also evidenced by a record-setting 45.5 million people who visited our city in 2015.

Last year's visits broke L.A. County's records for the fifth year in a row, the Tourism & Convention Board officials announced today. Figures showed that the number of visitors increased by 1.3 million from 2014, according to City News Service.

Mayor Eric Garcetti attributed the jump in growth to "investing billions at our airport, in mass transit and other assets that are making L.A. more exciting and accessible than ever," CBS Los Angeles reports.

In dealing with airport congestion, about $8.5 billion is being used to modernize the LAX airport, and $5 billion on a rail project to connect to the airport.

Garcetti has high hopes for L.A. tourism, and has set a goal of an even bigger increase—to 50 million visitors—by 2020. He added, "Los Angeles is a place where the world comes together for cultural experiences and celebrated attractions that cannot be found anywhere else."

Even though China's faced some economic downturn with the stock market recently, Garcetti said he doesn't think it's affecting tourism. "We see no letup of bookings in the last couple of weeks," Garcetti said of China, according to the L.A. Times.