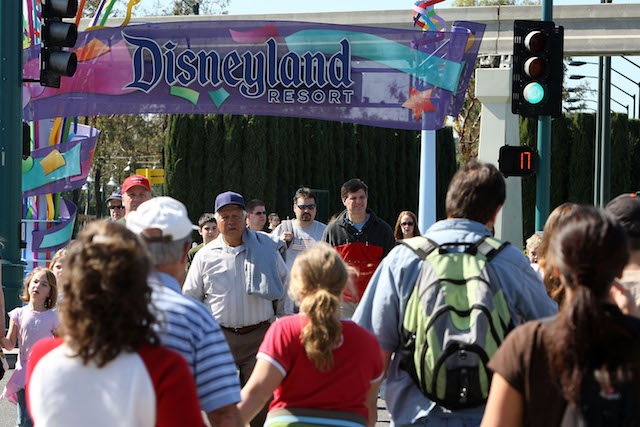 The entrance to the Disneyland resorts. (Photo by David McNew/Getty Images)

Disneyland is no longer allowing anyone over the age of 14 to wear masks or costumes. Sorry about that, guys.

On Wednesday morning, Disney announced that Disneyland, California Adventure, and Walt Disney World in Florida would be implementing tighter security measures for all visitors. Randomly selected guests will be screened by metal detectors at the parks' entrances, bomb-sniffing dogs will roam the parks, and toy guns will no longer be sold or allowed in. Although the changes come just two weeks after the terrorist attack in San Bernardino, Disney officials say the new rules aren't in response to anything in particular.

Here's a photo of a "vapor wake" or explosives sniffing dog @Disneyland pic.twitter.com/fnChvQVD0y

All Disney park visitors will first go through a bag check line, while some will be "randomly selected" to go through a metal detector. The detectors will be on both sides of the main entry plaza as well as in front of the monorail station in Downtown Disney.