Casbah Café Says They Were Forced Out Of 'Corporate' Silver Lake 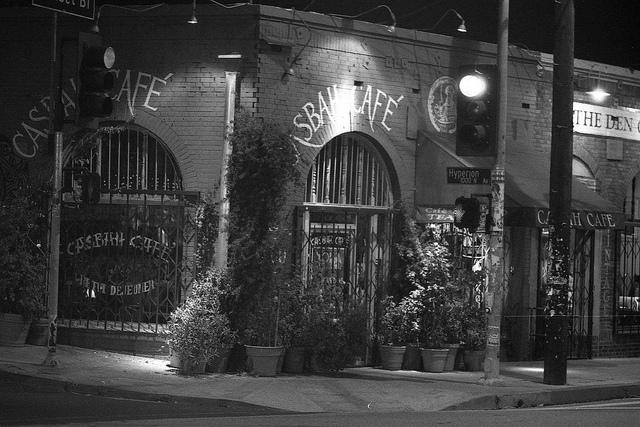 Silver Lake's beloved Casbah Café closed for good earlier this week, and the owners of the 20-year-old neighborhood institution say that they were forced out by their landlord from a neighborhood that has become increasingly corporate.

When LAist heard that the café at Sunset Blvd. and Hyperion had suddenly closed on Monday—surprising long-time customers who had been there the day before—we reached out to the owners to find out what had happened. In response we received the following letter, which outlines the challenges the business faced in recent years and how they were forced to pack up overnight.

Written from the perspective of the Casbah family rather than an individual, the letter explains how they saw the neighborhood transition from a "beautiful and real place" to an "aggressive and abusive environment" surrounded by increasingly corporate businesses. They also explain that they were unable to sell their own business due to pressure from the building's landlord and offer advice for other small businesses. They also offer criticism of the media for not supporting the small business in its time of need.

The letter concludes with thanks to the long-time supporters and a quote from a 17th century fable written by Jean de La Fontaine. While we won't suppose to be French scholars, the general idea behind the poetry seems to reinforce what the rest of the letter implies: Stick to doing your own thing and don't let outside influences get to you ( Or in this translation: "For you, choose army, love, or court; In town, or country, make resort; Take wife, or cowl; ride you, or walk; Doubt not but tongues will have their talk.")

A bitter ending is always better than an endless bitterness. Casbah is a good example of a turning point in a neighborhood where reality switches from everyday common sense to the corporate world reason.

We stayed longer than reason permitted. We tried our best for the friends of Casbah, but what is impossible is impossible...so we were forced to go with no notice for ourselves either. We had to pack up 20 years of a business over night. Silver Lake as it was when we started the neighborhood is gone for good and we could not be the sole supporter for keeping Silver Lake as it started any longer. Casbah never meant to be in such an aggressive and abusive environment with closely surrounding corporate businesses just down the street wanting to be celebrities, just simply a beautiful and real place to be with interesting people.

We want to thank the people whose children grew up on our corner and the people it saw everyday for 18 years, those who knew the staff by name. Thank you to those of which stayed working year after year, you know who you are. Those of which were unhappy were never forced to stay. We hope that other small businesses around Sunset Blvd. learn from Casbah. If you do not own your own building, you do not own your own business!

For the business it's worth nothing, for the landlord it's worth everything. Casbah was unable to sell their business, though now forced to leave, it will be sold by... no one else, but The Landlord. Where was the media when a small business like Casbah was in need of their support when corporate America was jumping up at every Sunset building? Is it because Casbah didn't pay for their ads? And after almost a decade of no writeups, it shuts down and now it's the time to take the article glory on a home run.

Casbah hopes that the people who make up Los Angeles, and the media which feed it, learn that if there is a small business that should be kept open, the bare minimum is not enough. Best wishes to the real Casbah supporters, the people who understood the quality of it and the difference between money-hungry corporations and small intimate rare businesses like Casbah Cafe. After all, this is the country for small businesses and entrepreneurship, n'est-ce pas?

- From the family that brought Los Angeles things from all around the world without billions of dollars and without any "super Pac" behind it.

The Casbah family tells LAist that they do not plan to open another restaurant or café in Los Angeles, but you can still keep up with their future endeavors on Instagram.