Video: Deputies Fatally Shoot Man As He Walks, Then Crawls, Away [Updated]

A video sent anonymously to KTLA appears to show a man being shot more than 30 times by sheriff's deputies in Lynwood, before dying on the sidewalk.

While investigators say the man, 28-year-old Nicholas Robertson, was armed, and did not respond to requests to drop his weapon, the video, captured across the street from the scene around 11 a.m. on Saturday, appears to show otherwise.

In the video, a sheriff's deputy is seen following Robertson, who appears to be walking away next to an Arco gas station. Then, we can hear at least a dozen gunshots fired, and see him fall to the ground. The camera pans to focus on Robertson, who appears to crawl on the ground, away from where the deputies are firing their guns. After a brief pause in the gunfire as Robertson is on the ground, another dozen shots are heard.

KTLA found that when they slowed down the video, they counted more than 30 total shots fired.

Officials said the sheriff's deputies had received a series of 911 calls reporting a "man with a gun" and "shots heard," according to City News Service. A sheriff's department spokesperson said Robertson had fired shots into the air and pointed the gun at them, before they opened fire, which was corroborated by other witnesses. Investigators also said they recovered a loaded .45-caliber handgun at the scene, which they believe belonged to Robinson.

"They shot him," Tracy Brown, a relative of Robertson's wife told the L.A. Times. "They shot him; as he crawled, they continued to shoot him."

Robertson was married, and the father to three children. His wife Nekeisha was on the scene, sobbing, and was heard shouting to police, "He ain't getting away with it!"

NBC L.A. reports that a crowd of more than a dozen gathered in Lynwood on Saturday night to protest Robertson's shooting, at one point tearing away the police caution tape from the scene.The sheriff's department sported tear gas and helmets; you know, just in case.

"Do you want to tell me why, in what circumstances, it would be justified to shoot somebody on their knees?" KTLA heard one protestor say.

Robertson's death is just one of the latest of many instances of fatal officer-involved shootings. One of these recent cases is the death of Mario Woods who was shot multiple times by SFPD; the instance was caught, graphically, on video. In Chicago, there's of course the case of Lacquan McDonald. And there's been plenty of these cases in Los Angeles, too. Like this one. Oh, and this one, this one, and this one. In 2015, 1,133 people have been shot and killed by law enforcement in the United States. Robertson is just one of them.

"The shooting of Robertson comes on the heels of the Chicago Police shooting of Lacquan McDonald and is eerily similar," Los Angeles Urban Policy Roundtable President Earl Ofari Hutchinson said in a statement. "You have a suspect that's on the ground and subdued yet officers still keep pumping bullets into him. This is both reckless and excessive use of force."

I want to assure the public that the Sheriff’s Department takes deputy-involved shootings very seriously and this investigation will be handled with the utmost professionalism and integrity. In this modern age of cellphone video and instant analysis on the internet I would ask that we keep in mind that a thorough and comprehensive investigation is detailed and time intensive. Our number one priority is public safety.

As the investigation into the incident unfolds, many factors will come into play to determine whether the shooting was an act of excessive force, or more. This could be difficult to prove, despite what the video footage appears to show. Sid Heal, a retired Los Angeles County sheriff's commander who testifies in lethal force cases, said that deadly force is justified if the officers see the suspect as an imminent threat. "The video suggests they believe he had a gun," Heal told the Times. "And they continue to shoot when he was on the ground, so that suggests they believe he was reaching for a weapon."

Still, the fact that the deputies kept firing over and over, even while Robertson was literally crawling on the ground, is reason enough to believe their actions weren't justified. Ed Obayashi, an Inyo County deputy and attorney told the Times, "They are going to have to articulate why they made every one of those shots. They must show they reasonably used deadly force."

Updated 1:47 p.m.: The L.A. County Sheriff's Department released photos and a video that appear to show Robertson holding a gun, reports the L.A. Times. Here's a still captured from the video: 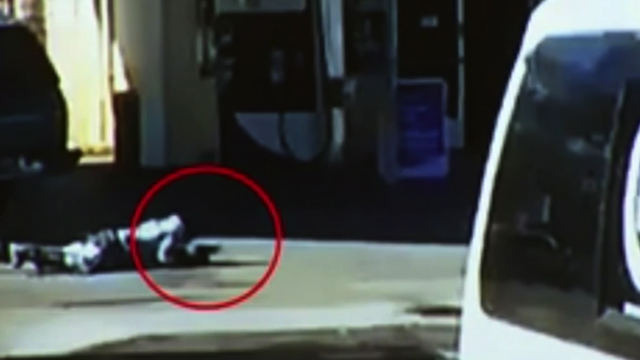 City News Service reports, that Robertson had fired six to seven shots in a nearby residential neighborhood around 10:53 a.m., which prompted the first of at least six 911 calls. Steve Katz of the Sheriff's Homicide Bureau said that investigators had "evidence that he [Robertson] did discharge the gun."

Los Angeles County Sheriff Jim McDonnell said Robertson walked south on Long Beach Boulevard, where he was yelling and acting strangely, and spent some time at a car wash and pizza place before deputies arrived at the scene, and saw Robertson with a gun. Katz said some people at the gas station believed that Robertson was going to shoot them. "There were several citizens in the area," Katz said. "There were some concerns about their safety."

Katz also said that Robertson might have experienced some "domestic discord" with his wife that could have prompted his actions, but did not provide further details.

The sheriff's department stressed that the investigation is in its "infancy" and that they want to be "as transparent as we can."