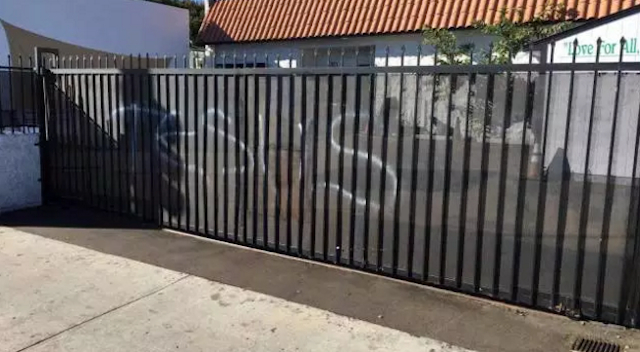 Two mosques in Hawthorne were vandalized overnight on Saturday by spray-painted graffiti and the placement of a fake grenade, police said.

"Jesus" was scrawled in spray paint on a fence of the Ahmadiyya Muslim Community Baitus-Salaam Mosque on Prairie Ave., according to the Hawthorne Police Department. City News Service reports that in addition to the graffiti, a device that looked like a hand grenade was found in the mosque's driveway, but was determined to be a plastic replica by the L.A. County bomb squad. It was reported around 6:30 a.m. Sunday morning.

Another nearby mosque, the Islamic Center of Hawthorne, was also vandalized by a spray-painted message that read, "Jesus is the way."

"A few of our members went to early morning prayer at about 5 a.m. and they found graffiti on the outside wall and 'Jesus' was written on the fence," Zahid Mian, a member of the Ahmadiyya Muslim Community Mosque, told the San Bernardino Sun. "As Muslims we don't really find (the crosses) very offensive, but the act of vandalizing is disturbing."

Mian continued, "Many of us fled Pakistan and places like that to come to America so we can worship freely. It's kind of shocking because we all grew up thinking that America was the land of freedom and opportunity and everyone was respected for their beliefs."

The Los Angeles field office of the FBI is investigating both incidents, which are being classified as hate crimes.

This comes less than two days after a man set fire to a mosque in the Coachella Valley on Friday. The suspect was arrested on charges of arson and the carrying out of a hate crime.

Anyone with information is asked to call 800-222-8477 or visit www.LACrimestoppers.org.