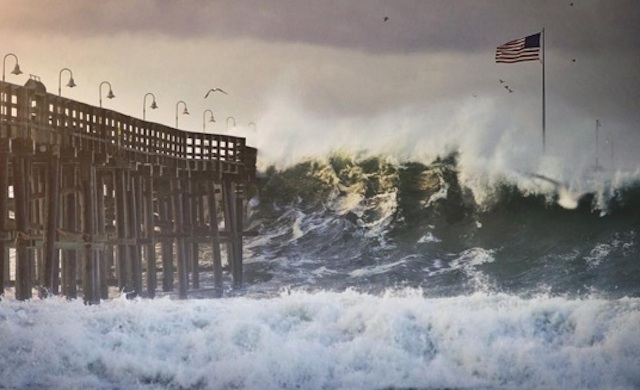 Massive waves crashed over the Ventura Pier this morning, damaging the structure and flooding nearby streets.

Around 7 a.m. Friday morning, Ventura police responded to reports that high surf was crashing over the pier and damaging the structure, reports KTLA. Police cleared the few remaining people on the pier and closed it to the public at 7:10 a.m. The pier was still standing, though many of the posts and railings had broken loose. The extent of the damage has yet to be assessed and the pier will remain closed indefinitely in the meantime.

BREAKING: Dramatic video from Sky5 shows waves pounding the Ventura Pier, which was closed as a result of the high surf. The footage also captured water surging into a nearby neighborhood, flooding streets and possibly homes. Watch KTLA's video here: http://on.ktla.com/anb4p

The high surf and strong winds also flooded nearby streets and beachfront homes in the neighborhood, pouring over walls. Ventura Public Works officials closed a section of Harbor Boulevard between Sanjon Road and California Street due to the flooding, reports the Ventura County Star.

This is nuts! Massive surf invades homes in #Ventura - Also forces the pier to close down. Watch @KTLAMorningNews pic.twitter.com/nJuaydk2tq

High surf is expected to build to 9 to 12 feet, with local sets up to 15 feet, according to the Ventura County Star, and a local high surf advisory remains in effect until Sunday with a coastal flood advisory until noon today.