L.A. has tons of reliable watering holes for sipping craft cocktails, wine and beer, but sometimes we need some new bar destinations to keep things interesting. Thankfully, in 2015, a slew of great new bars opened up all over town. From an '80s-themed speakeasy to classy cocktail hideaways, lively craft beer spots to cozy wine bars, here are 12 of our favorite new bars in Los Angeles. 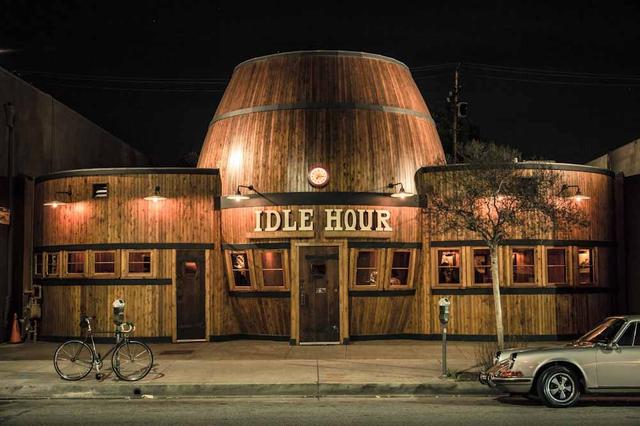 While lots of bars these days work hard to perfect a vintage look and feel, Idle Hour managed to tap in—so to speak—to some actual L.A. history by restoring a massive barrel-shaped bar and adding some welcome modern flourishes. Originally built as a taproom and café in 1941, the 1933 Group—known for their distinctive flourishes at other favorites like Sassafras and Harlowe—managed to beautifully resurrect the long-dormant building on Vineland. The bar is a stunner, and the spacious back patio—centered around a huge ficus tree—is the perfect place to spend some idle hours. They even painstakingly brought a replica of a bulldog-shaped café out there, which long-ago sat on Washington Blvd. and was recreated for the Petersen Auto Museum. You'll sip great cocktails like the bourbon and chartreuse-fueled Copperhead or The Silencer with smoky mezcal and spicy Ancho Reyes Chile liqueur, along with barrel-aged drinks on tap, and even fun beer and shot combos like the elevated Renaissance Man with Ommegang Gnomegang and Benromach Scotch. The bar fare is no joke either, with everything from sloppy joes and steak to salads and veggie bowls.

One of the newer kids on the block, Everson Royce Bar (aka E.R.B.) is an impressive, yet notably understated addition to the Arts District. Opened in September by a crack team of L.A. bar and restaurant vets—including Randy Clement, owner of Silver Lake Wine, chef Matt Molina of Mozza and Chris Ojeda, who helped start the Varnish—it's a thoughtfully crafted neighborhood bar with a lowkey vibe, excellent drinks and a killer menu. Grab a seat at the 40-foot long marble bar, cozy up in a booth along the wall or head to the back patio. Not surprisingly—given the team behind E.R.B.—the carefully curated wine and beer selection offer great choices, as does the cocktail menu with a handful of rotating original creations like the Paper Plane with bourbon, lemon, aperol, and amaro nonino or the Siesta with tequila, lime, grapefruit and campari. The top-shelf liquor selection also runs deep, including many hard-to-find spirits. And should you come hungry—and you should—the menu offers straightforward, yet excellently executed fare like pork and shrimp dumplings, smoky potato taquitos and a solid burger. 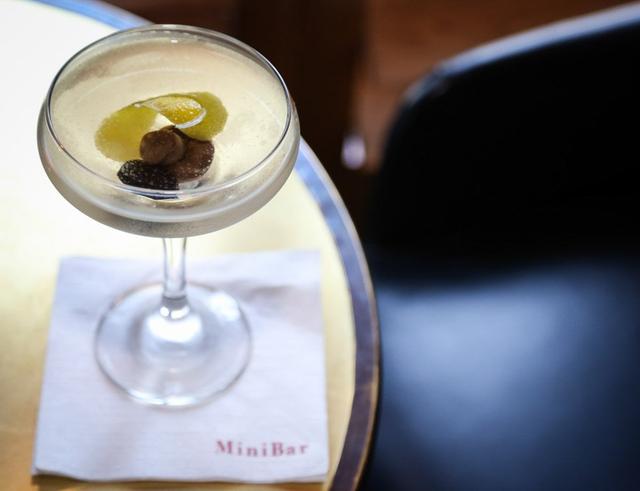 The Bernard cocktail at Minibar (Photo by Eugene Lee/LAist)

MiniBar focuses on the classics, like the kinds of cocktails we imagine Don Draper would be into. The design of this throwback bar that's situated inside the Best Western at the bottom of the Hollywood Hills—the same one that houses 101 Coffee Shop—is perfectly aligned with its drinks. This moody, 32-seater bar focuses on eight cocktails—from Marlon Brando's supposedly favorite drink, the Godfather, to the Bernard, a version of the gin martini topped with a pickled mushroom from Little Dom's—and an extensive whiskey-tasting menu. It's the perfect place to hide away or go on an intimate date. —Jean Trinh 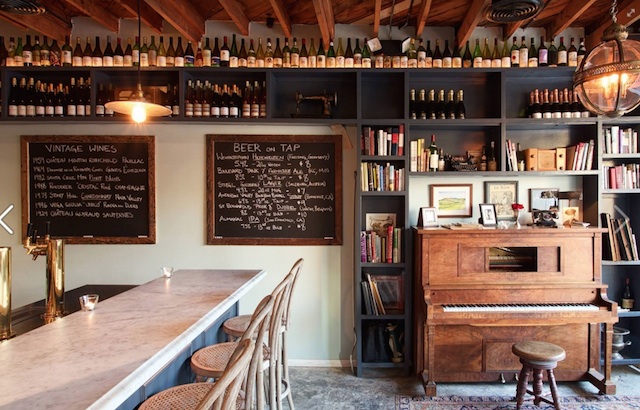 When Augustine opened up in February, the charming Sherman Oaks bar gave wine lovers—newbies and seasoned pros alike—a great new destination for sampling hard-to-find and vintage pours. Launched by Dustin Lancaster and Matthew Kaner of Los Feliz’s Bar Covell, along with longtime friend, and musician, Dave Gibbs, this is a great place to geek out over wine or just catch up with friends over quality pours. While you won't find any Two Buck Chuck here, if you're willing to splurge a bit you can find some incredible sips—some of the extensive offerings tap into Gibbs' private collection, which includes wines dating back to the 1800s. You could spend anywhere from $10 a glass to around $100, and bottles can go for $100 to $1,000, depending on how deep into the catalogue you want to get. They also have a great selection of craft beers on tap and by the bottle. The cozy space was once a radio repair shop in the 1940s and features old radios, a 1912 piano and other vintage flourishes throughout. Grab a seat at the beautiful marble bar, settle into a booth or grab a seat on the couch. And you'll definitely want to explore the menu, which includes wine bar classics like cheese and charcuterie, and everything from tater tots to braised octopus and steak. 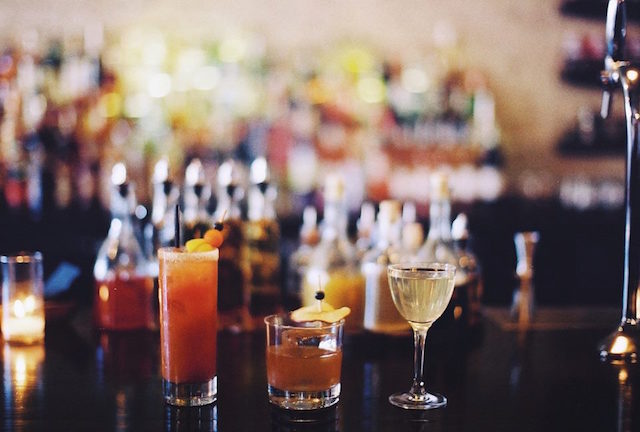 The Normandie Club & The Walker Inn

The Normandie Club opened inside Koreatown's Normandie Hotel in February. This dark and intimate cocktail lounge opens at 5 p.m., Monday to Friday, and at 7 p.m., Saturday and Sunday, serving beer, wine and stiff craft cocktails like their an apple brandy and rum Daiquiri, as well as all the classics. They're also no slouch when it comes to mixing up something impromptu based on your personal palate.

Hidden within the Normandie Club is also the Walker Inn. You get into this bar by pressing a secret button inside the Normandie Club. But to snag one of their coveted 27 seats, you'll likely need a reservation. Guests can order from the The Book—Walker Inn's menu of classic cocktails—or The Walker Menu, which changes every month or so. There is also an omakase-style option for $45 at the bar. —Juliet Bennett Rylah 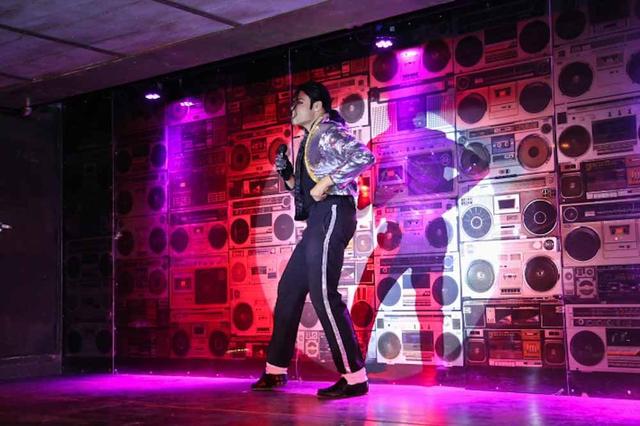 You may think there's enough 80s nostalgia and speakeasy-style bars to go around these days, but somehow Break Room 86 manages to bring the two themes together for a really fun time. Once you find the secret entrance behind The Line Hotel, you'll find yourself in a totally boss retro party, courtesy of the Houston Brothers who also brought us Good Times at Davey Wayne's. You'll hear the likes of Prince, Madonna and Simple Minds playing from the DJ booth, catch break dancers on a stage that emerges from behind the bar, and find loads of other choice details like a wall of vintage TVs with classic music videos, arcade games and more. Grab a menu inside of a VHS box and choose from colorful and potent 80s-themed cocktails like Dr J! and the Ecto Cooler or throwback boozy push-pops and wine coolers. You're also going to want to check out the karaoke rooms, so you can show off your best Michael Jackson impression. 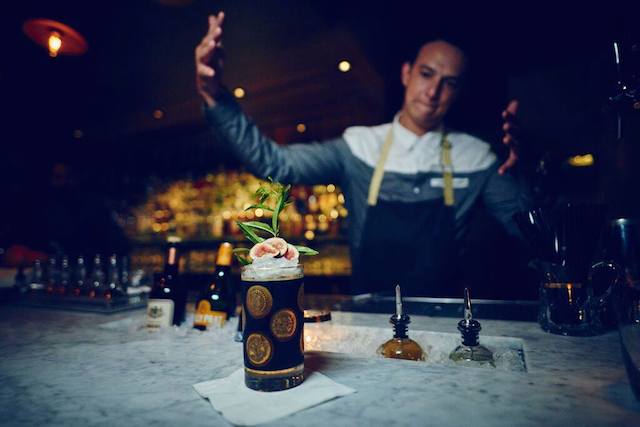 "That's My Jam" at The Fiscal Agent (via Facebook)

Bar maestro Julian Cox has been the mastermind behind some of L.A.'s best cocktail lineups over the past 10 years—including Redbird, Sotto, Petty Cash and more—so it should come as little surprise that his first solo venture is a cocktail lovers haven. Perched above Barrel & Ashes in Studio City, The Fiscal Agent is a swank and sophisticated—yet unstuffy—hideaway with killer cocktails. Cox brought along a team of other cocktail pros to craft clever, vintage-inspired concoctions in beautiful glassware like the Flight of the Concords, a frothy blend of Plymouth gin, violet, Concord grapes and anise hyssop or That’s My Jam with bourbon, amaro, housemade black mission fig jam, and lemon verbena. There's a menu of 10 drinks, ranging from about $12 to $18, but you're definitely going to want to ask about the secret menu that will open you up to a bevy of artful beverages. The menu also features refined bites from charcuterie and cheese to Peruvian scallops and steak tartare. 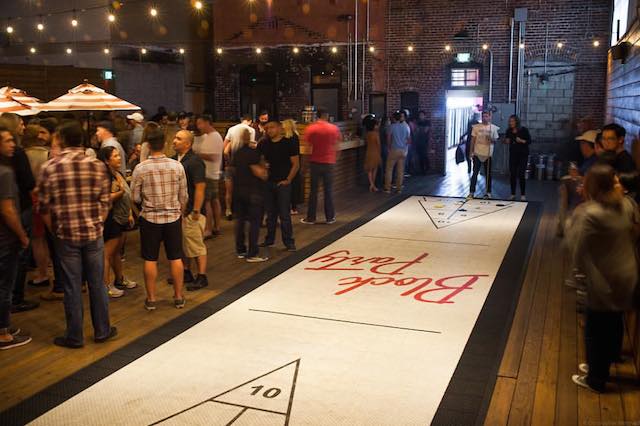 Highland Park's new craft beer bar, Block Party, really lives up to it's name. With a friendly and knowledgable crew, laid-back neighborhood vibe and huge patio complete with a huge shuffleboard game, the busy spot offers a fun place to sip the massive selection of craft beer on top and in bottles and cans. Order a pour from one of the 10 rotating Cali-centric taps, special release bottles and cans, a beer or wine snow cone or a Michelada with a fresh fruit popsicle and head to a picnic bench on the back patio. Even in colder weather, you can find a spot on the long bar or just hang along the wall next to the sprawling beer cooler, and catch up over a Lost Abbey Saison or a Saint Archer IPA. You can also grab some solid bar bites like "big ass" pretzels with melted cheese or their gourmet dogs and sausages with fixings. You can even order in food from nearby. Welcome to the party. 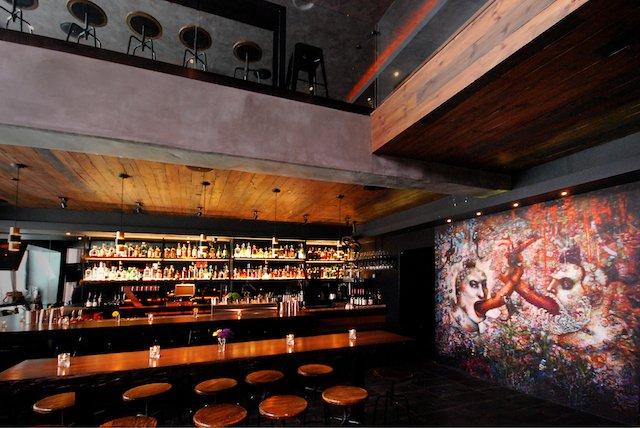 At Bar Mattachine, downtown's new gay bar, there may be a dancefloor and occasional live music and DJs, but the emphasis here is definitely more craft cocktails than dancing. Named for the Mattachine Society, a pre-Stonewall gay activist group in L.A. founded by Harry Hay, the bar and lounge offers a slick and artfully-designed two-story destination. Choose from a list of 10 signature cocktails like the The Hartwood with mezcal, pineapple juice, sugar, lime and bitters the Pershing Square Fix with vodka, citrus, raspberries and housemade curacao. Grab a stool at the bar or communal table downstairs, or head upstairs to the low-key lounge area and second bar. You'll find dark woods and industrial flourishes throughout, which manage to be sleek and modern, while still feeling warm and inviting. And you can't miss the stunning mural by Andrew Campbell, a prominent gay artist, as you walk in. 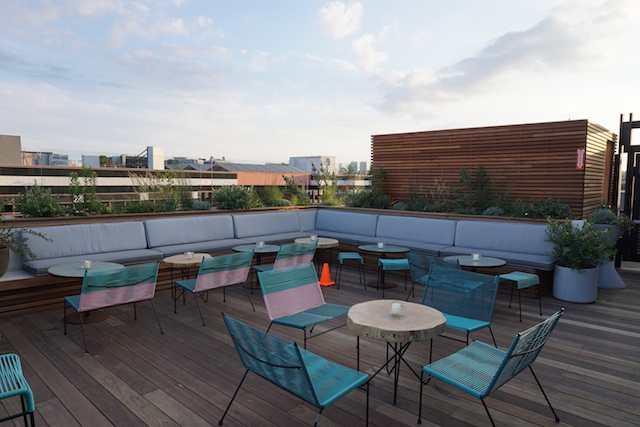 While there are plenty of places to soak in the skyline from downtown L.A., E.P. & L.P. gives us a chance to get a 360-degree view from a rooftop in West Hollywood. While the downstairs is an Asian-fusion restaurant called E.P., we usually like to focus upstairs at the hip rooftop bar, which is dubbed L.P. There, you can get spiked boba cocktails and some solid standards like their refreshing and light Pimms Cup. And if you get the munchies, they have some late-night food offerings as well. We suggest the Pork Bao, made with succulent pork belly. —Jean Trinh 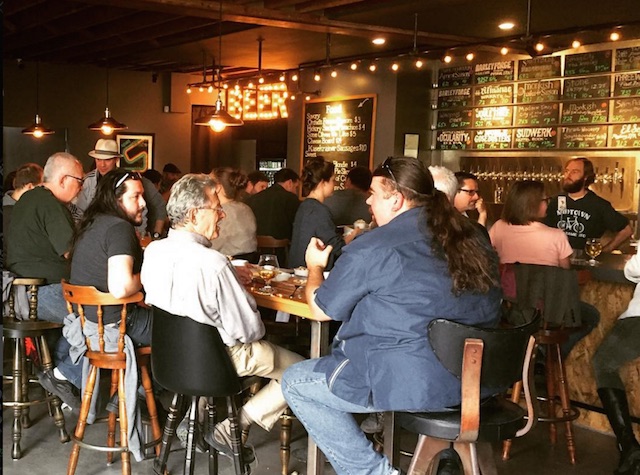 Sneaking in with a December opening, this new Koreatown beer bar offers a rotating selection of craft beers from over a dozen taps, plus bottles to-go. It's tucked away in the corner of a strip mall off Western Avenue, and offers seating along the bar or at a number of long communal tables. You can get a small selection of snacks, including popcorn drizzled with olive oil and spices; charcuterie; olives and desserts. They opened with a strong list of beers, including a flavorful coconut porter from Barleyforge that quickly won my favor, and have continued to maintain a varied and robust selection. —Juliet Bennett Rylah 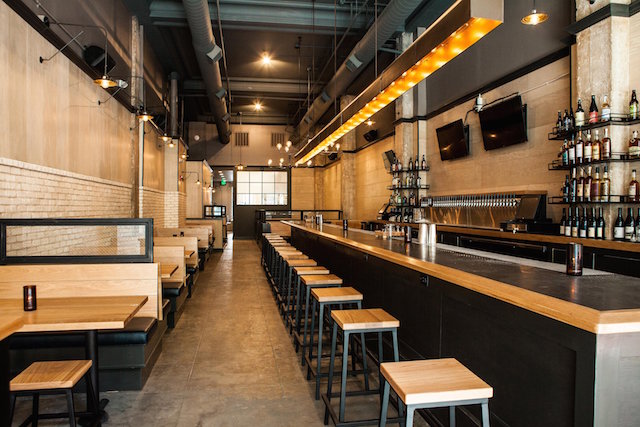 Barrel Down (Photo by Marie Buck)

Barrel Down has been serving up craft beers and comfort foods in downtown's Financial District since June. Nestled among neighborhood favorites like Seven Grand, BS Taqueria and Bottega Louie, Barrel Down maintains a list of beers that are always on tap as well as a rotating selection of more unique brews, resulting in about 40 different beers to choose from at any given time. You can order a full pint, or get a smaller 8 ounce pour and sample a few. They also serve craft cocktails. Food options include lighter salads, plus burgers and hearty sandwiches like their Buttermilk Fried Chicken. They also have a great bread pudding. Pop in for happy hour Monday through Friday from 4 p.m. to 7 p.m. for deals on select beers and food. —Juliet Bennett Rylah