The Victims Of The San Bernardino Mass Shootings 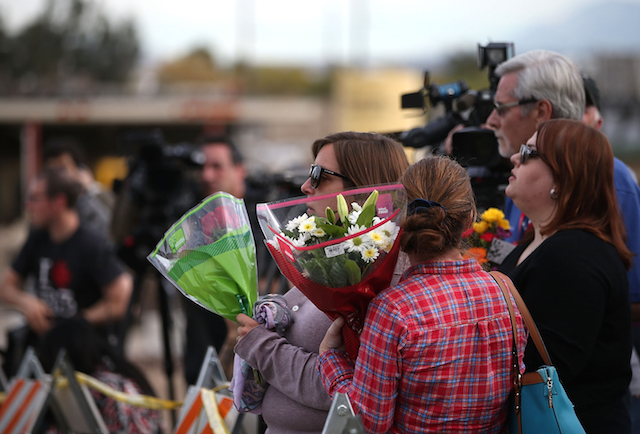 Mourners holding flowers outside of the Inland Regional Center in San Bernardino today following the mass shootings that claimed 14 lives and wounded 21 others. (Photo by Justin Sullivan/Getty Images)

Details have been trickling out about the victims of the San Bernardino mass shootings on Wednesday that left 14 dead and 21 wounded. As of now, there have been seven victims whose family and friends have identified them among the ones who died at the hands of suspects Syed Rizwan Farook and Tashfeen Malik, who were later killed in a shootout with police. We will continue to update this post as we find out more about the victims.

UPDATE 4:30 p.m.: San Bernardino officials just released a full list of the names of the 14 victims killed in the attack:

Some of the victims were identified as employees of the San Bernardino County Health Department, which was throwing a holiday banquet in one of the conference rooms in the Inland Regional Center where the shooting took place yesterday morning. Farook worked as an inspector for the county department. His former co-worker, Griselda Reisinger, told the L.A. Times that she heard the office had recently thrown a baby shower for Farook and his wife, who had a six-month-old baby.

New York Giants safety Nat Berhe tweeted today that one of his cousins was among those killed in the attack, but has not identified his relative.

Just got word that one of my cousins was among the 14 killed yesterday, I'm so sick right now.

The true terror is that this keeps happening. I still can't believe it. Take a moment to think of the families hurting right now. 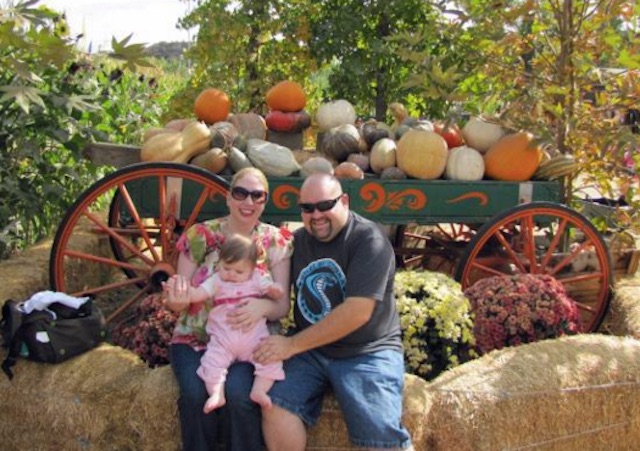 Robert Adams with his wife, Summer, and daughter, Savannah (Photo via GoFundMe)

Adams was an environmental health specialist with San Bernardino County Health Department. He grew up in the Inland Empire, according to family friend Jenni Kosse. Kosse told the Times that Adams' wife, Summer, was his high school sweetheart, with whom he had a daughter, 1-year-old Savannah.

"When you saw the three of them together, you just wanted to jump in the middle and think, 'I want to have fun too,'" Kosse said.

According to a Facebook post from Nathan Stinson of Texas, Adams enjoyed playing an online role-playing game called EVE Online. "In honor [of] his memory a GoFundMe has been set up by a close family friend to ensure his children have a future and his wife a bit of a fallback in this incredibly trying time. If you can find it in yourself to give even a few dollars I, and thousands with me would greatly appreciate it," Stinson wrote in his public post. 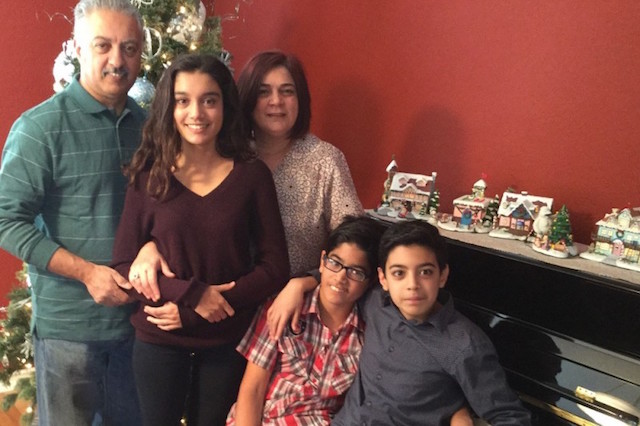 Betbadal was born in Iran and moved to the U.S. with her family at 18, fleeing persecution of Christians following the Iranian Revolution, according to a GoFundMe page set up for her family. She attended Cal Poly Pomona where she earned a degree in chemistry, and according to her LinkedIn account, she also held a B.S. in biotechnology and could speak Farsi and Assyrian. She was a health inspector for the San Bernardino County Department of Public Health, where she had worked for over nine years, and went to Inland Regional Center on Wednesday to give a presentation to her coworkers, the L.A. Times reports.

She was married to Arlen Verdehyou, a police officer at Riverside Community College, and had three children, ages 10, 12 and 15.

Verdehyou said that he had texted with his wife the morning of the shooting, telling her he'd taken some money out of the bank to do some Christmas shopping, according to the San Bernardino Sun. Both were Roman Catholic, and Verdehyou said that his wife had just decorated their Christmas tree. He and his children held out hope after they did not hear from Betbadal after the shooting that she had survived, but were informed of her death when the coroner came to their home.

"It is the ultimate irony that her life would be stolen from her that day by what appears to be the same type of extremism that she flew so many years ago," the GoFundMe reads. 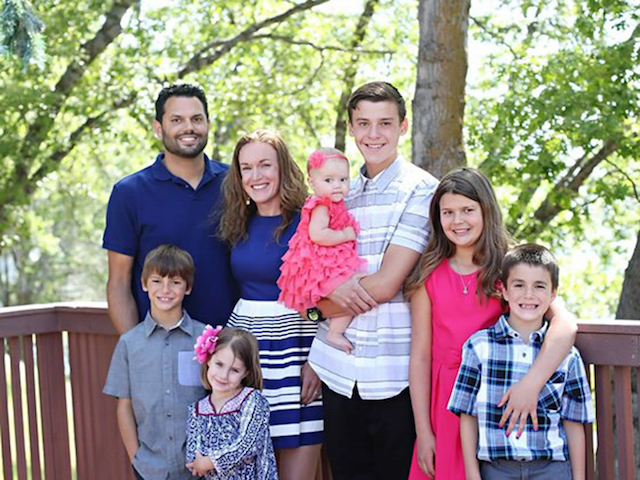 Michael Wetzel with his wife and six children (Photo via YouCaring)

Wetzel was a 37-year-old husband and father of six, and the supervising environmental health specialist with the San Bernardino County Department of Public Health, according to The San Bernardino Sun. He is survived by his children, who range in age from infant to teenager, and his widow, Renee Wetzel. The family lives in Lake Arrowhead.

Family friend Arlene Arenas told the L.A. Times that Michael loved babies and was a family man. He was always seen in the Lake Arrowhead neighborhood running errands or at the grocery store with his children, three of whom were from his first marriage, and three with Renee. He served as a coach for boys' and girls' soccer in the local AYSO league for seven years. "He was super tall, and the littlest of girls thought he was a giant," Arenas, whose daughter was coached by Michael, said. "He had no qualms about letting them follow him around, or walking around like a monster, with the little ones shrieking and hanging off his legs."

Celia Behar, the family's spokesperson, set up a YouCaring crowdfunding page for the Wetzels, which has raised over $105,000 of its $125,000 goal. She writes that Renee sent her a message saying, "Please pray. My husband was in a meeting and a shooter came in. There are multiple people dead/shot. I can't get a hold of him."

After eight hours of waiting, Renee would find out that her husband was among the victims in the horrific attack.

Behar told ABC 7, "They are very overwhelmed. There are six kids that have lost their father and Renee is a stay-at-home mom, so they've also lost all of their financial support, and the kids are just finding out today."

Michael's ex-wife, Amy Wetzel wrote on Facebook, "The hardest worst day of my life is upon me today. My heart is broken. Suddenly our entire world has shifted. I have to tell my babies that there (sic) dad is no longer here."

A pastor for Church of the Woods, the church Michael attended, told the San Bernardino Sun that he was with the family this morning. The church's website has a section dedicated to the family, with details on how to donate to the family, prepare meals for them, and also pray for them. 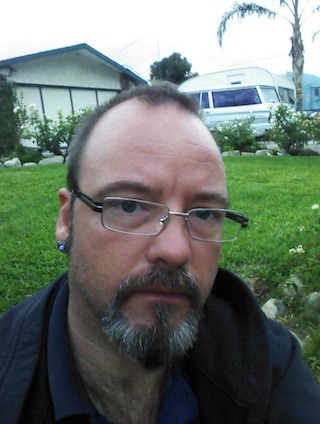 Kaufman worked in the Inland Regional Center, running the facility's coffee shop, and trained the developmentally disabled employees who worked there, according to the L.A. Times.

His boyfriend of nearly three years, 32-year-old Ryan Reyes, told the Times that Kaufman would be the type of person who would engage anyone in conversation, that they thought of themselves as free spirits and shared a love for horror movies. Kaufman wouldn't get a driver's license because he said he loved his daily rides with Reyes in his car when he would take him to work.

Reyes would drop Kaufman off at work for the last time on that tragic day. Reyes found out about the shooting when his sister texted him, asking if he had heard about the shooting at the facility where Kaufman worked. Reyes frantically called and texted Kaufman and received no response. He heard conflicting reports about Kaufman's condition, including that he was shot in the arm but would survive. It wasn't until 22 hours later that he would find out that Kaufman was among the 14 killed.

According to the Press-Enterprise, Reyes posted on Facebook, "I am sad to report that Daniel has been positively identified as one of the fatalities at the scene. Thank you all for your love and support. I love you Daniel, and I will forever miss you." 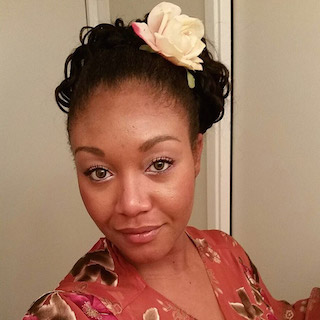 Clayborn worked with as a health specialist with the San Bernardino County environmental health department since January 2013, a relative who confirmed her death, told PEOPLE.

She was originally from Los Angeles, according to her Facebook page.

Clayborn graduated from UC Riverside in 2010, and served as a resident advisor during her time there. On her LinkedIn, she wrote that with her work, she was "making a difference daily by protecting people where they live, work and play."

Friends wrote on Facebook that UC Riverside would be lowering their flag to half-staff for Clayborn, according to the Press-Enterprise.

Her sister, Tamishia Clayborn, wrote on Facebook, "RIP Baby sis I love you more than you ever knew." 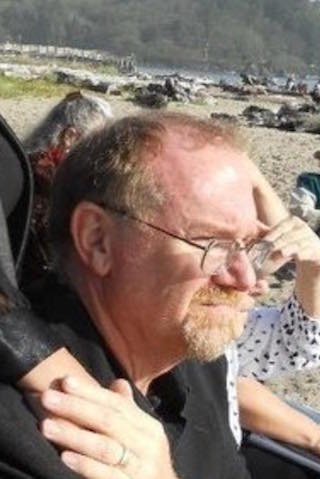 Meins, a father of two, worked for Riverside County for 28 years before retiring in 2010, only recently going back into the workforce in September and taking up a post with the San Bernardino County's Environmental Health Department, according to the L.A. Times, in an email sent to employees by Juan C. Perez, the director of Riverside County Transportation & Land Management Agency.

His daughter, Tina M. Meins, told the Press-Enterprise that her father also worked as an Extended Care Coordinator at St. Catherine of Alexandria School in Riverside.

"I will always remember Damian as a caring, jovial man with a warm smile and a hearty laugh," Perez wrote.

According to the Press-Enterprise, "Friends describe Damian Meins as a kind, compassionate, loving man with a ready smile. He'd dress as Santa Claus for school pictures at Saint Catherine of Alexandria School."

His former classmate at Notre Dame High School, Walter H. Hackett, told the Press-Enterprise that Meins met his future wife, who was then named Trenna Hofmeister, at that school. She now is the principal at Sacred Heart School in Rancho Cucamonga. 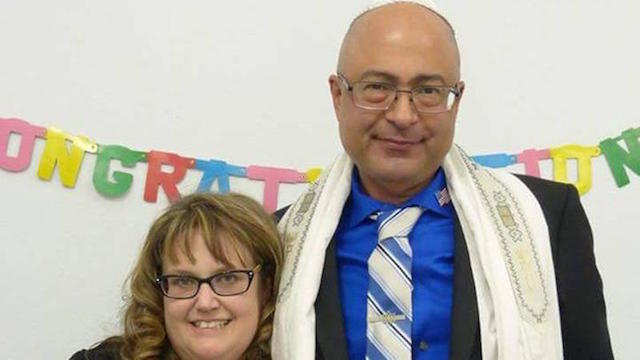 Nicholas Thalasinos with his wife Jennifer Thalasinos (Photo via Facebook)

Nicholas Thalasinos worked as an employee at the San Bernardino Department of Health for 12 or 13 years, his wife Jennifer Thalasinos, told ABC 7. He also worked alongside Farook in the environmental division as an inspector.

The couple had been married for nine years, according to the New York Times. Jennifer, a teacher, said they met online. Nicholas was living in New Jersey, but moved to San Bernardino to be with Jennifer.

A GoFundMe set up for Jennifer described the couple's relationship:

Jenn and Nick had a truly romantic, fairy tale love, having first met online via Beauty and the Beast fandom (the CBS TV show from the 80's) and shared their love for science fiction and fantasy and had a very deep, spiritual relationship. They went through quite a lot in their 14 years together, loss, health issues, but always had each other to depend on.

Nicholas had two adult sons, and lived in Cape May County in New Jersey working as a health inspector more than a decade ago, a friend told The Inquirer. Ed Beck, whose wife worked with Thalasinos at the Cape May County Department of Health, said of Nicholas, "He was a wonderful friend."

The Inquirer reports that just days before the shootings, Nicholas, who was a devout Messianic Jew, posted online that he received a threat, saying, "You will die and never see Israel." He often posted on Facebook about his faith and his political views.

"My husband was very outspoken about ISIS and all of these radicalized Muslims," Jennifer told the New York Times. "If he would've thought that somebody in his office was like that, he would've said something."