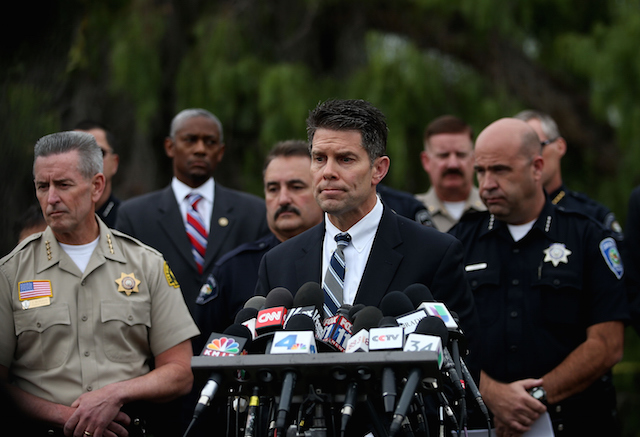 The FBI says Wednesday's mass shooting in San Bernardino will be investigated as an act of terrorism, taking the case out of the hands of local law enforcement.

At a press conference on Friday, David Bowdich, the assistant FBI director in charge of the Los Angeles office, made the announcement, saying the determination was made "based on the information and facts as we know them." Bowdich did not go into specifics, but said, "There's a number of pieces of evidence that has pushed us off the cliff."

Bowdich was hesitant to say a group such as ISIS was responsible for Wednesday morning's attack, in which 14 people died and 21 were injured. The suspects, Syed Rizwan Farook and Tashfeen Malik, were killed in a shootout with police later that afternoon. Officials believe the couple was self-radicalized.

An anonymous federal official told the L.A. Times that Farook had contact with the Nusra Front in Syria and Shabab in Somalia. On Friday morning, federal officials told the New York Times that the other suspect in the case, Farook's wife Tashfeen Malik, had declared her allegiance with ISIS in a Facebook posting.

Malik was a Pakistani national who entered the United States in July of 2014 with Farook on a K-1 visa, also known as a fiancée visa. The couple married and had a 6-month-old daughter together.

On Friday morning, the landlord of Farook and Malik opened their Redlands apartment to the media, and dozens of reporters stormed into the residence, scouring every room and item. The FBI released the scene back to the owner, having already seized evidence such as a .22 caliber rifle, ammunition, computers, and digital storage devices. Invoices in the apartment uncovered by the L.A. Times revealed that Farook and Malik had purchased weapons from the Forth Worth, Texas-based Cheaper Than Dirt and Budsgunshop.com stores.

Authorities say all the weapons recovered by authorities in the case were legally purchased, though only two handguns were purchased by Farook himself. At the press conference on Friday, Bowdich said officials were in contact or had detained somebody in connection with the weapons purchases, but declined to elaborate any further.

Bowdich also added that investigators found two smashed cell phones in a trash can nearby. Aerial news footage showed investigators digging through a dumpster in the neighborhood.

"The FBI's number one mandate is to protect the homeland from attack and we are absolutely engaged," said Bowdich.

Click here for more of LAist's coverage of the San Bernardino shooting.