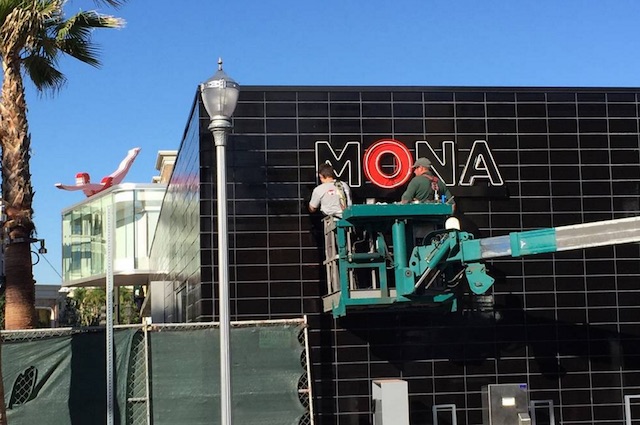 If you've been anxiously awaiting the reopening of the Museum of Neon Art like we have, you can get a preview this month.

The Museum of Neon Art shut down its downtown Los Angeles location in 2011 and is preparing to reopen at their new Glendale spot in January, according to L.A. Magazine. However, on weekends through the holiday season, the museum will be open for a little shopping, plus it will feature two fun exhibits.

In the main lobby, guests can see about a dozen neon clocks from the collections of Curtis Stimpson, Larry Albright and Eric Evavold. The exhibit is called "It's About Time." You can also check out a collection of mid-century photos of neon art in Glendale taken by photographer Glenn B. Ward.

The gift shop will be open with a selection of books, cards, T-shirts, ornaments, custom neon pieces and other gifts for sale, Adriene Biondo, MONA co-chair, told LAist. Board members will be present to answer questions or chat about neon. And while the gallery is not officially open, the open design of the museum will allow a few peeks at what's currently being put up. "We're installing a lot of things, so it won't be empty," Biondo said.

They've also installed their own neon signage, which includes a "Museum of Neon Art" sign that can be seen from Brand Blvd., a "MONA" sign in the alley, and the diving woman sign that appeared at their downtown spot. Biondo says that their museum, coupled with the nearby Americana, the recently re-lit Alex Theatre spire, and the holiday decorations on the street, make for a nice "neon Wonderland."

Those who visit can also peer into the crafts room and see the workshop where, once open, the museum will host a number of introductory and advanced neon classes with masters of the craft. There is currently an abstract art piece in the room from artist Brian Coleman, and Biondo likened the space to exhibition cooking, because passersby will be able to peek inside.

Outside on the paseo that connects Brand Blvd. to Central Park and the Glendale Central Library there will also be a neon Clayton Plumbers sign. When it's lit up at night, the animated water droplets pour from the leaky faucet. This original sign belonged to Clayton's Plumbing in Westwood and was donated to the museum by the business' owners in 2007. However, it sign was in such disrepair that it couldn't be displayed, so Glendale helped pay for a new sign, according to the L.A. Times.

The Museum of Neon Art is located at 216 S Brand Blvd in Glendale. Sneak peek hours are Fridays, noon to 5 p.m.; Saturdays, 10 a.m. to 7 p.m.; and Sundays from noon to 5 p.m. starting on November 28 and extending through the holidays.