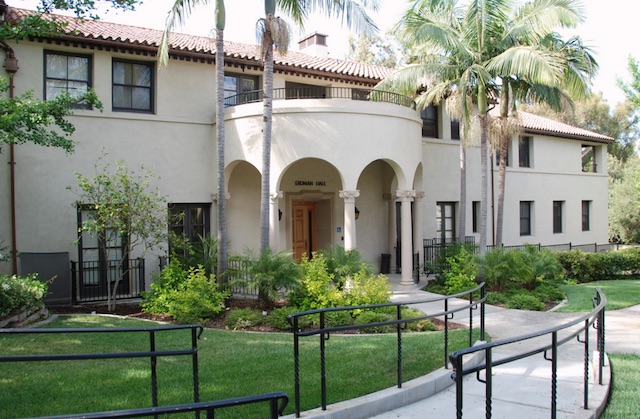 In the wake of several similar protests in universities across the country, students are occupying the administrative center at Occidental College with a list of demands calling for more diversity on campus.

About 400 students entered the Arthur G. Coons Administrative Center at Occidental College in Eagle Rock yesterday afternoon, bringing with them a list of 14 demands, the L.A. Times reports. These demands include increased funding for minority student groups, diversity training for students and faculty and a new Black Studies major. If the school fails to act on these demands by the end of the week, students want school President Jonathan Veitch to resign. The sit-in was organized by the Black Student Union, and protesters plan to stay there until Friday, LA Weekly reports.

Student Olani Ewunnet told LA Weekly, "The deadline is this Friday. We have 14 demands. If that does not happen we are not negotiating in any way, and we'll occupy until [Veitch's] resignation."

Students also protested outside of Veitch's campus home last week Thursday, alleging that the administration has been handling both complaints of racism and sexual assault poorly. The latter is not a new complaint for the school: Occidental has previously faced criticism for keeping several claims of sexual assault a secret, which launched a federal investigation into the school's alleged mishandling of cases of sexual violence. In a recent survey of over 600 Occidental students, 8% said they'd been sexually assaulted.

Veitch went out of town last Thursday and was also gone yesterday, a move that students also criticized. Associate Vice President Marty Sharkey, however, told the Times Veitch left because he "realized his presence there was no longer being constructive" and that he wanted the school to be a "safe and productive space." Sharkey also said it was fine if students chose to stay in the Administrative Center 24 hours a day, as the students had been "conscientious and respectful."

While 42% of students at Occidental identify as a minority or multiracial, those same students say they don't feel particularly welcome and that other students seem insensitive. A black student said he'd been called the N-word at campus parties, and students complained about a fraternity party that was planning on throwing an 'End of the World' party with themes such as Malyasia Air, ISIS and ebola. This party was shut down after other students reported it to administrators.

Occidental Director of Communications Jim Tranquada told the Weekly that administrators are currently reviewing the list of demands. "We want to publicly applaud the spirit and effort of these students because the issues that they're dealing with are critically important ones. We always encourage students to speak out, and we welcome the opportunity to dialogue with them," he said.

Starkey also said that they were working on hiring for a chief diversity position, though students believe the budget of $100,000 isn't enough for that person's salary, plus programming and services.

Occidental's protests come on the heels of the resignation of former Claremont McKenna College dean Mary Spellman, who was met with protests after responding to an emailed complaint from a Latina student by saying the school would work to better serve students who "don't fit our CMC mold." This followed the resignation of University of Missouri System President Tim Wolfe, who stepped down from his position last week after being accusing of mishandling racial incidents on the Columbia campus in several incidents.

Meanwhile, USC has agreed to set aside new funding for diversity programs as well as select staff members to lead those efforts, the L.A. Times reports.

@firstpersonnews this is from the protest last Thursday at occidental college. pic.twitter.com/77T7cHUFbd