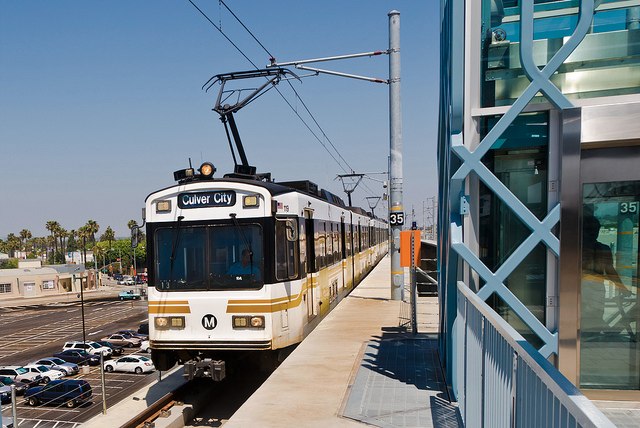 The Expo Line hasn't done much to reduce traffic at all, but that doesn't mean it wasn't money well spent. This isn't just about you, drivers.

On Monday, researchers with USC released a study (paywalled) that used data from sensors on the 10 freeway and major surface streets to measure traffic before and after the Expo Line opened in 2012. "These readings revealed that Phase 1 of the Expo Line had little to any impact on local street or freeway congestion," the study found.

This flies in the face of predictions supposedly made to promote the Expo Line project—that the rail would ease congestion on the regularly choked 10 freeway—but as L.A. Weekly points out, most research finds that public transportation only temporarily eases congestion. But reducing traffic doesn't necessarily have to be the only goal of public transit. Ridership for both rail and buses along the Expo Line corridor also increased by 6 percent, the study found.

"Looking into the future, this study shows us how to be more realistic in what we should expect from transit," wrote Sandip Chakrabarti, one of the researchers on the study. "There is a value in creating quality transit for those who use it by choice or by need. It improves productivity for a lot of people." Metro says ridership of the Expo Line has exceeded expectations with over 30,000 boardings per day, and surveys find that people that live within a half-mile of the line have reduced their reliance on cars.

"For me, it's an opportunity to study and not waste time in traffic," USC law student Andres Cantero of Long Beach told the L.A. Times. Cantero says he takes rail to school five days a week. "Very rarely do I drive."

So even though the Expo Line is not the Traffic Golden Bullet it may have been pitched as, there at least exists an alternative for commuters.

"It's unreasonable to assume that a single project will reduce traffic congestion," UCLA urban planning professor emeritus Martin Wachs told the Times. "That is not to say the Expo Line is a poor investment. It gives people more choice, attracts new development patterns and has environmental benefits. The effects are to be seen cumulatively over many years."

The first phase of the Expo Line opened in 2012, running from downtown to Culver City, with Phase II running all the way to downtown Santa Monica expected early next year. Can't wait!