Photos: These Adorable Dogs Explore Many Of L.A.'s Most Iconic Landmarks

Thanks to an adventurous dog walker, some of L.A.'s adorable dogs are exploring some of the city's most iconic landmarks.

Pet care may be a business for Enrique Gamboa, owner of downtown L.A.'sRuff Cutz DTLA, but he's all about showing his four-legged clients a fun time when he takes them out for walks. Besides offering grooming and day care services for dogs (and some cats), Gamboa spends much of his time taking people's pets on day trips around Los Angeles. While the dogs get a chance to explore many of downtown's streets and historic locations, they also get the chance to stretch their legs in far flung corners of the county, from the Pasadena Rose Bowl to the Sunken City of San Pedro.

"I love taking them out on excursions—and they love it, too—and it's great for them to get the exercise," Gamboa tells LAist. "Sometimes I think the dogs see more of L.A. than their owners." 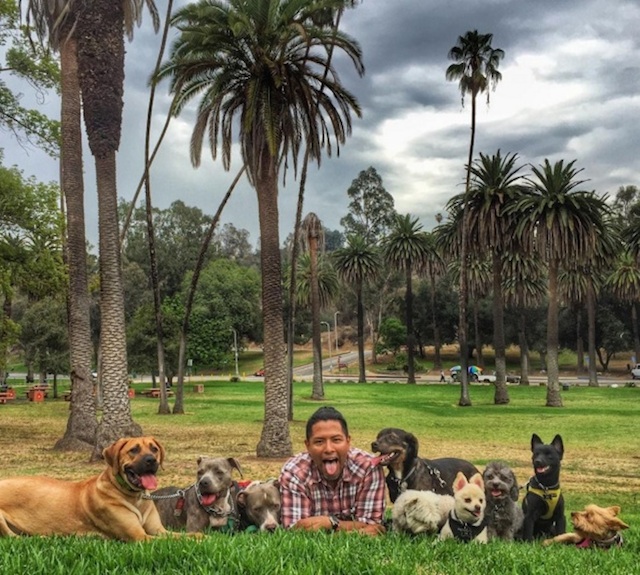 Gamboa uses the trips not only to help many of downtown's loft-dwelling dogs to get more exercise, fresh air and space to run around, he also incorporates training during the trips and helps the animals get socialized with other dogs and people.

While some of the trips include just two or three dogs, Gamboa often loads up as many as seven or eight pups of widely varying sizes into his dog-friendly SUV. Gamboa tells us:

That's part of the training too. They have to learn to jump in when they're asked to, and it's really cool to see them learn. When they're together as a pack, there's never any trouble—they're just best buds and they know it's all about having a good time and exploring.

Many of the walks include visits to parks around town, including a stroll around Echo Park Lake or the Robinson Memorial in Pasadena, while other trips include more urban sights like Dodger Stadium, Disney Concert Hall or even the L.A. River. Gamboa also runs a hiking program for dogs, "Tails on Trails," in which he'll take the dogs on longer walks, sometimes 3 hours or more once a week, to places like Griffith Park where they can get a more rigorous workout. The adventures include a mix of hiking, training—including basic commands and recall—and also a chance to run around and play. Gamboa took a break from offering the hiking option due to a knee injury, but plans to relaunch it soon once he recovers fully. 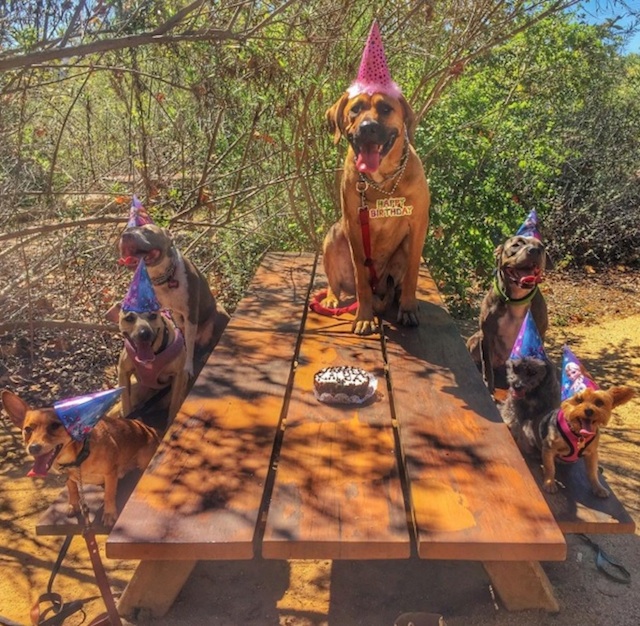 While Gamboa primarily works with dogs that live downtown, he has expanded the radius to include some pets from Silver Lake, West Hollywood and West LA. But usually he refers those farther afield to other other service providers that he knows well. Though he has a couple part-time employees to help with the grooming, boarding and care, he doesn't want to take on too many clients to avoid sacrificing the quality of the experience for the dogs. He also tries to keep prices low in order to give more dogs the chance to see L.A.

Prior to getting into caring for dogs, Gamboa worked in finance in downtown L.A. "I couldn't handle the politics and corruption," he tells us. "I wasn't myself anymore and I quit my job, put some money away and worked on rebuilding myself. I wanted to do something simple and I knew it was either going to be dogs or food." Having learned about dog training while raising his own chocolate lab for 13 years, Gamboa saw working with dogs as a way to have more freedom and time. He now also takes his own dog, Kaiya—a Tosa Inu/Japanese Mastiff, rescued from the dog meat trade—on adventures around town and beyond, including National Parks in Utah, Arizona and California. He's also thrilled by the happiness he can bring, not only to the dogs, but also to anyone they encounter while out on their adventures, he explains:

I always see people as they come up to us and I don't know what's going on in their day—whether it's their best day, worst day or a mediocre day, but as soon as they come up to us they just start smiling. And it's just awesome to see that, and hopefully their day might be a little better just seeing these guys.

You can see more of the Ruff Cutz DTLA adventures on Instagram. And stay tuned for a gallery showing of Gamboa's photographs with the dogs, which he hopes to do it in a space where the stars of the show—the dogs—are also welcome.