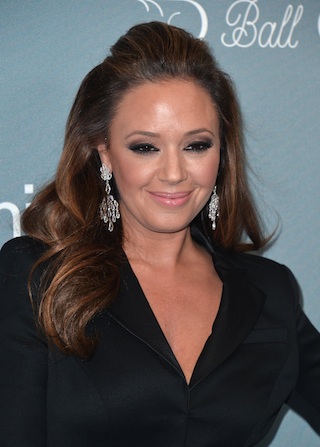 Leah Remini (Photo by Alberto E. Rodriguez/Getty Images)
Leah Remini has been releasing tidbits about the Church of Scientology over the last few days, making her rounds on TV and radio promoting her tell-all memoir. The book was finally released today, and it includes some revealing stories.

In Troublemaker: Surviving Hollywood and Scientology, the 45-year-old, former King of Queens actress who defected from the Church last year talks about being a member for 35 years, and gives some interesting details about other celebrity members. Here are five of the strangest stories from her memoir.

Tom Cruise's angry hissy fits: Remini says that when she and her husband, Angelo, were both over at Cruise and then-wife Katie Holmes' house one day, the Mission:Impossible actor wanted to bake cookies. Cruise searched for cookie-making ingredients, but failed to see that there was a batch of prepackaged cookie dough right in front of him and got upset with his assistants. "'Guys, where's the cookie stuff?'" Remini recalled Cruise saying. "Goddamn it! Can I just get the stuff for the cookies, guys? Get in the f—king present time, is what you need to do.'"

Remini says Holmes whispered something to Cruise to chill him out. "Tom seemed like a child who had never been told no," Remini wrote. "The whole scene was so painful to watch that I had to step in. 'Oh, wait,' I said, as if I had just discovered something. 'Tom, is this it?'" Cruise replied back: "'Oh, thanks.'"

How Cruise's children really think of their adoptive mother, Nicole Kidman: Remini and her husband rode in the same car as Cruise's adopted children, Bella and Connor, to the airport after Cruise's and Holmes' wedding. Remini writes that she asked them about their mother Kidman and if they had seen her recently. "Not if I have a choice," Bella said. "Our mom is a f—-ing SP," with "SP" meaning "Suppressive Person," deemed as an enemy of the Church.

Cruise's long wait for his bride, Holmes, on his wedding day: Remini wrote that Cruise was left waiting at the wedding altar for Holmes to show up for an uncomfortable 20 minutes. Jennifer Lopez turned to Remini and asked, "Do you think Katie is coming?"

Suri Cruise crying at Cruise and Holmes' wedding: In a bizarre encounter on the couple's wedding day, Remini wrote that she heard their daughter, Suri, crying at the venue. She wrote:

"After about five minutes I headed to the bathroom to offer some help. When I opened the door, I found three women, including Tom's sister and his assistant, standing over the baby, who was lying on the tile floor. I didn't know if they were changing her diaper or what, but the three women were looking at her like they thought she was L. Ron Hubbard incarnate. Rather than talking to her in a soothing voice, they kept saying, 'Suri! Suri!' in a tone that sounded like they were telling an adult to get her s—t together."

The Church of Scientology has issued a lengthy response to Remini's claims. They write that Remini is a "shallow, spoiled individual with a sense of entitlement who obsesses endlessly over such petty matters as seating and limo arrangements, how she looks in a photo and who believes other people's family matters are her business."

They added, "Leah Remini knows the truth she conveniently rewrites in her revisionist history. The real story is that she desperately tried to remain a Scientologist in 2013, knowing full well she was on the verge of being expelled for refusing to abide by the high level of ethics and decency Scientologists are expected to maintain. Her repeated ethical lapses and callous treatment of others led to an ecclesiastical review which resulted in her being expelled. She now regurgitates the tired myths the Church has repeatedly debunked, circulated by the same tiny clique of expelled former staffers bitter at having lost the positions they enjoyed before their malfeasance and unethical conduct were uncovered. Ms. Remini is now joined at the hip with this collection of deadbeats, admitted liars, self-admitted perjurers, wife beaters and worse."