Photos: Inside Pok Pok LA, A Culinary Gift In Chinatown

Pok Pok LA finally opened this week in Chinatown, and it fits in quite nicely among its neighboring restaurants, serving as a casual hotspot where you get high-quality Southeast Asian food and grab a creamy, coconut mango cocktail to wash it down.

I visited the eatery, which took over the old Fu Ling restaurant in the Mandarin Plaza, for lunch this week. The first thing I noticed was that Pok Pok LA, compared to the James Beard Award-winning chef Andy Ricker's first L.A. joint that opened last December—tiny noodle house Pok Pok Phat Thai—is that it is much larger in every sense of the word. The two-story restaurant, which also has an outside patio with the leaves and branches of a huge tree wistfully shading the tables, is just as casual as his Portland and New York restaurants. And it has a massive menu to boot, with almost 40 dishes. Don't even get me started on Pok Pok LA's whiskey menu.

"We have a pretty big menu," Ricker told LAist. "The menu is something we’ve been working on for 10 years now. At this point nothing on the menu is a loser—it’s just a question of what people prefer." 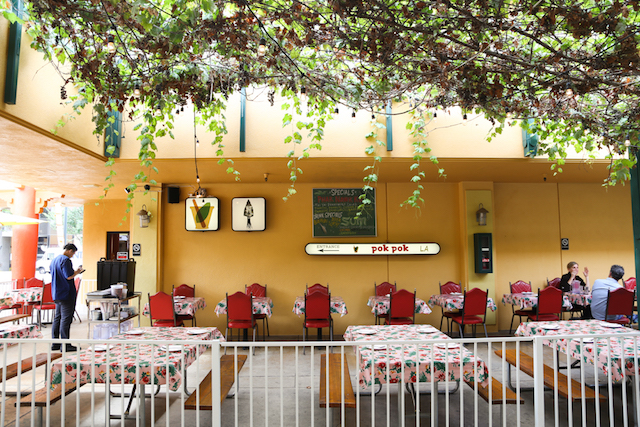 On the first floor, which is open for lunch service (the upstairs portion opens only during dinner), flowery red, pink and green oilcloth tablecloths cover each table. Simple red-quilted chairs and brown banquettes line the walls. Ricker left the beautiful Chinese-style trellis work on the ceiling that was originated from Fu Ling. A stocked bar sits to the right. Thai music is playing in the background in the open and airy space.

You might feel overwhelmed at first looking at Ricker's extensive menu; after all, not everyone can read the Thai or Vietnamese names of the dishes, but as you examine the menu some more, each of the descriptions are mouth-watering, and there are tips throughout on how to eat the food or what to pair the dishes with. Some of the descriptions warn you the food is spicy, that a dessert is durian-light, or gives a nod to the restaurant or people that inspired Ricker's dish. The waiters are extremely helpful, too, so you won't feel stupid asking questions on how to even eat something. One waiter suggests that I get sticky rice so I can ball up the rice and dip it in my soups and curries. It's a good recommendation.

It's the little touches that make a restaurant special. Pok Pok LA starts you off with water lightly flavored with pandan leaves, and a small cup of complimentary salty roasted peanuts. I order two cocktails, one of which is a Tamarind Whiskey Sour, which is a kicked-version of your average whiskey sour. Even though it's a winner, the real star of the show is the Mango Alexander, a creamy, light and well-balanced cocktail made with mango, vodka coconut cream and lime. Specks of lime zest provide a pop of color to the white canvas.

Now, onto the food. Ricker created a "Drinking Food" portion on his menu, which includes dishes that he noticed on his many travels that people in Vietnam and Thailand were eating while...well, drinking. Although the Ike's Vietnamese Fish Sauce Wings are always a good go-to on a Pok Pok menu, I order the Phat Hoi Laai—stir-fried manila clams. The presentation is the most beautiful out of all my dishes, with these clams sitting in a glimmering light broth, adorned with fresh Thai basil leaves, slices of green onions and bright red peppers. 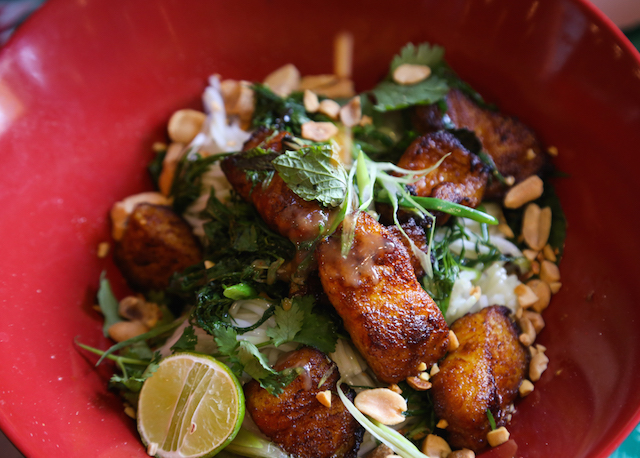 The Cha Ca 'La Vong,' though ends up being one of the most memorable dishes. Small, chunks of catfish are marinated in tumeric and sour rice and then fried in tumeric oil. It's perfectly seared and flavored. It sits on a bed of vermicelli noodles, and under that is hiding more turmeric sauce and fresh dill. There's a spicy pineapple sauce on the side. A waiter tells me to slowly mix it in to taste, while another says he just goes for all of the sauce. I listen to the second waiter, toss all of the sauce in, and I have no regrets. On the menu, this dish gives a nod to its inspiration: "a stab at the famous dish from La Vong restaurant in Hanoi, Vietnam."

Ricker has a nice blend of Northern Thai, Central Thai and Vietnamese dishes on his menu, and with that comes with some comfort dishes. My family has lived in several different Southeast Asian countries, and Ricker's Kaeng Hang Leh reminds me of a home-cooked meal my mother makes. It's not your typical curry you might find in Thai restaurants, but this Northern Thai dish is almost like a stew with tender, fatty and juicy pork belly and pork shoulder chunks. It's sweet and salty, and flavored with ginger, Burmese curry powder, turmeric, palm sugar and tamarind. I ball up some of the sticky rice like a little nugget and dip it in the remaining curry sauce.

What's a good meal without dessert? I end on Sangkhaya Thurian, a sweet sticky rice topped with a square-shaped durian, coconut and palm sugar custard. It's covered with toasted sesame seeds, and is sweet and salty. This, too, reminds me of desserts my mother makes at home. The waiter notes that the divisive durian fruit, which is pungent for some and fragrant for others, isn't for everyone. He says their dish is a "gateway to durian," meaning it's lightly-flavored with the taste. I grew up eating durian, so it's in my wheelhouse. To me, this dessert's just right.

I also check out the dinner area upstairs. It's a huge, open space with banquet tables with the same red and green motif as downstairs. There's a bar here, too. The tables up here are covered in red-and-white checkered oilcloth tablecloths, green bamboo leaves wallpaper decorate the space, and giant vases with leafy plants serve as the centerpiece to the room. There are even red gated areas that seem perfect for a semi-private group dinner setting. Throwback Thai beer ads on mirrors hang on the walls of the restroom area.

Everything in Pok Pok LA seems to have a thoughtful touch—from the variety of dishes to the design—all culminating in a homey feel, like a neighborhood spot. Bring some friends, share some dishes family-style, and try out some whiskey while you're at it.