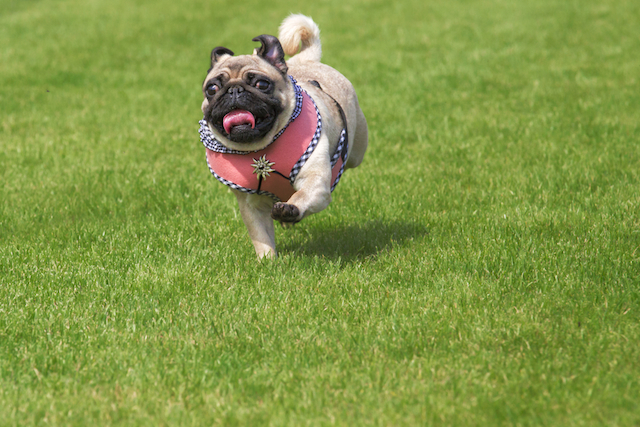 Run, pug, be free! (Photo by Mezzotint via Shutterstock)

Plans for a new and exclusive Beverly Hills dog park may include keyed access, a park ranger and thorough dog screenings.

Following years of being forced to sit and roll over, plans for Beverly Hills' first off-leash dog park seem to be finally moving forward, according to the Beverly Hills Courier. Though, this being Beverly Hills, the park planned for the corner near Alden Drive and Foothill Road is not likely to be your typical doggy-free-for-all. The five-acre park is expected to accommodate 40 dogs and will now move into the design phase.

After an apparently heated public comment period at a lengthy Beverly Hills City Council meeting earlier this week, city staff were instructed to investigate plans that include limiting access to the park, possibly having a ranger there when it's open and shortening the hours from 6 a.m to 10 p.m. to 8 a.m to 8 p.m. Keyed access to the park could be limited to Beverly Hills residents, though exceptions may include hotel guests and businesses in the city.

Dogs that are allowed will likely be required to be vaccinated, spayed/neutered and licensed, and owners may have to receive a special permit to use the park, according to the City Council's agenda(pdf).

Not everyone in the neighborhood is jumping for joy over the plan, as many residents worry about dog bites and poop on the pristine sidewalks. Strong opposition also came from four nearby orthodox synagogues, which worry that the dogs could endanger congregants on their way to service. To try and address the issue, plans for the park will include a ranger posted for the first four Saturdays the park is open from 8:30 a.m. to 12:30 p.m., when most people would be walking to service.

Cost estimates are around $400,000-$450,000. The city hasn't yet announced a date for construction, so until then, Beverly Hills chihuahuas and their friends will still have to find somewhere else to play.