We Might Be Breathing Cleaner Air Thanks To CicLAvia, Study Says 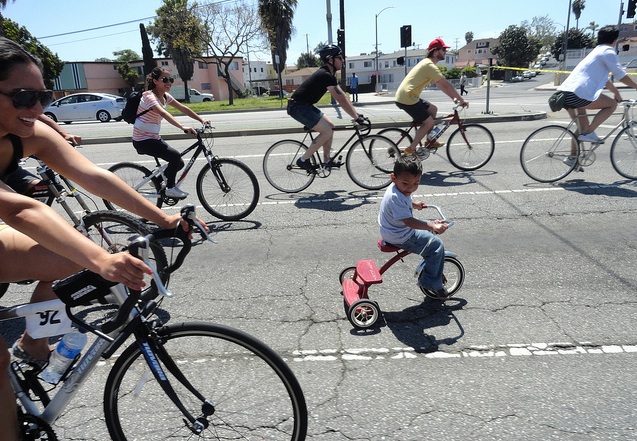 CicLAvia just celebrated its fifth anniversary with a car-free event from MacArthur Park to downtown L.A. over the weekend. And it looks like these one-day events might be doing some good for the environment, especially by significantly reducing air pollution, according to a new study.

The UCLA Fielding School of Public Health took a look at last October's "Heart of Downtown" event, a route that went through the neighborhoods of Echo Park, Chinatown, Boyle Heights and East L.A. They measured the air quality on the day of the CicLAvia event, as well as the Sundays the week before and after it for comparison. It turns out that CicLAvia's events, which close off streets and encourage people to use non-motorized modes of transportation like walking, bicycling, and rollerskating, could be making a major impact on air quality not only in the closed-off streets, but in nearby communities as well.

According to a UCLA release:

The researchers found that along the streets that were closed for CicLAvia, the presence of ultrafine particles was reduced by 21 percent and readings for particulate matter measuring 2.5 micrometers or smaller declined by 49 percent. In addition, particulate matter measurements on other streets in the neighborhoods that hosted the event (even though those streets were still open to traffic) were 12 percent lower on the day of the event, compared with non-event days.

The authors of the UCLA study that was published in the Environmental Pollution journal said that they would still need to measure other future CicLAvia events to get a full understanding of how these events truly affect local air quality. They acknowledged that October's event was just a small sampling, but found that these type of car-less, open-street events would be beneficial to the local community and CicLAvia participants.