Street Artist Hanksy Is Taking Over A 'Massive, Historic' Mansion 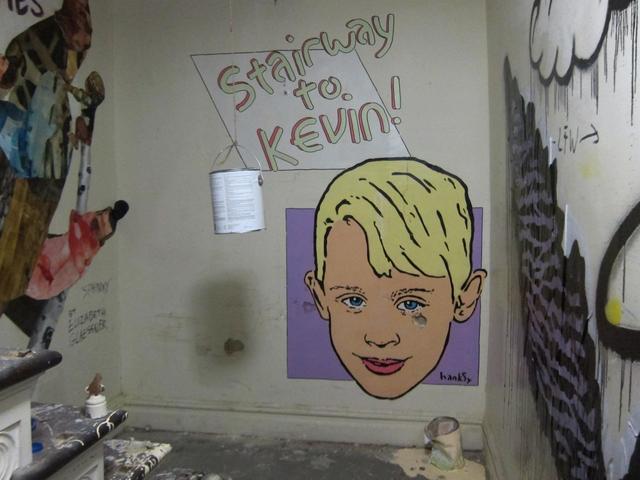 From NYC's "Surplus Candy" show in 2014. (Photo by Scott Lynch/Gothamist) 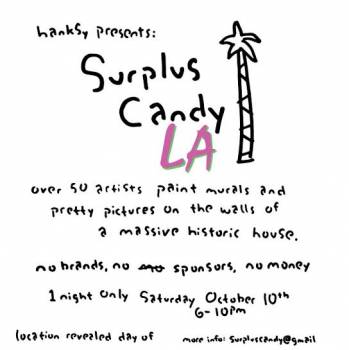 NYC-based street artist Hanksy hosted a show in an abandoned Chase Bank in Manhattan earlier this year, a follow-up to his more illicit show in an abandoned tenement in the area in 2014. That one was called Surplus Candy, and he's about to create a West Coast version in an old mansion in L.A. The show will have the same name as the East Coast version, and it promises to be just as quick and dirty.

For the next five days, he'll be "gathering some of the nation’s top street and graffiti artists" here (which means you can also expect an influx in street art all over L.A.). They'll be filling the mansion with pieces all week, which will be unveiled to the public for one night only. Immediately after, all murals and paintings will be buffed over—"this is a hyper-transitory event. You either see it or you don’t.," Hansky says.

Regarding the location, he told us: "The mansion is empty. It's over a century old and while it's a bit banged up, it's still a magnificent beast. And after it's all painted up, it'll be be a perfect metaphor for Hollywood. Pretty and pristine on the outside, but all fucked up on the inside."

The show will be open to the public on October 10th, and the location will be made available that day at 4 p.m. PST via Hanksy's Twitter and Instagram.

Over the next week I'm bringing together 50+ artists and taking over an old LA mansion. The house will be open for one night only on Oct 10th. Follow #surpluscandy for updates. LA we be coming for you.