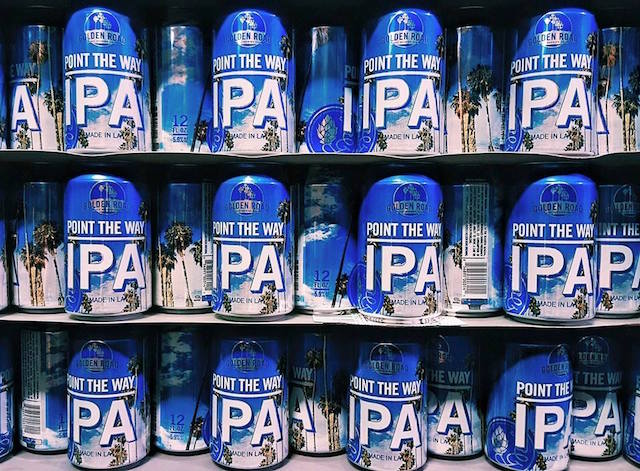 It seems like the beer giants have been swallowing up California craft breweries lately—and Golden Road Brewing is the latest one in the mix.

Anheuser-Busch (A-B)—you know, the guys who own college party faves like Budweiser and the Bud Light Lime-a-Rita—announced today that they acquired the Atwater Village-based brewery. "The deal will enable Golden Road to bring more of its fresh, canned beer to the brewery's local market and to introduce its unique hop-forward beers to more consumers," A-B said in a statement.

Golden Road, known for popular brews like Point the Way IPA and Golden Road Hefeweizen, has been around since 2011 and just so happens to the be largest craft brewery in L.A. County. They'll be joining A-B's growing craft beer portfolio, which includes Goose Island Beer Company, Blue Point Brewing, 10 Barrel Brewing and Elysian Brewing.

Meg Gill, ‎president of Golden Road Brewing, who co-founded the brewery with Tony Yanow, said in statement: "The energy and passion of the beer community is what drew me into this industry and with Golden Road we wanted to help develop the craft beer market in L.A. Our team worked hard to build Golden Road from the ground up and we are proud of the growth we’ve achieved in such a short time. California is an exciting and competitive market for beer and I see endless opportunities in partnering with Anheuser-Busch and their incredible distribution network to bring our beers to more people."

Beer Advocate reports that they believe Golden Road will continue to be based in L.A., and isn't going national immediately. Also, their pubs are expected to stay open, with Gill still staying with the company. No word on Yanow though.

The financial terms of the deal weren't revealed in today's announcement. However, Golden Road and A-B did release a video where Gill sat down to chat with Andy Goeler, the CEO of Craft A-B, so they could explain why they were doing the partnership and what's ahead in the future. It looks like their plans for opening a brewery in Anaheim, and a tasting bar in downtown L.A.'s Grand Central Market are still in the works.

"Well to start, it's business as usual but amplified," Gill said. "We're continuing our plans for Anaheim and Grand Central Market. We're going to open those very quickly here. We're going to be able to innovate on the style side, on the offering side, and we're going to take those beers and our current portfolio and put them into your awesome portfolio with the best distribution network in the world."

Golden Road Brewing is one of the many craft breweries getting bought out by beer giants lately. Earlier this month, MillerCoors announced they were now a majority stakeholder in San Diego's Saint Archer, and Heineken said they were taking a 50% stake in Petaluma's Lagunitas Brewing Co.

It makes sense all these high-roller brewing companies are eyeing California's craft breweries. After all, California has the largest number of breweries out of any other state, nearly 600, the California Craft Brewers Assn. told the L.A. Times. And craft beer is the top performer in the U.S. beer market in general. Tom McCormick, executive director of the California Craft Brewers Assn. explained what makes craft breweries so appealing: "Craft beer is an authentic story, a true story. It’s been hard for all the big global breweries to replicate the popularity of craft beer by producing their own craft beers because they don’t have the story and they lack the authenticity."

Not everyone is happy about all these acquisitions and investments. The Street published a story earlier this week, titled "Say Goodbye To Craft Beer As You Know It," about how so many craft breweries are getting bought out. And some people have already taken to social media to express some mixed feelings about Golden Road's new move:

Golden Road acquired by AB. Saint Archer by MillerCoors. Lagunitas by Heineken. Does drought make a brewery more likely to sell out?

@guysdrinkinbeer I really love Golden Road; I'm curious to see where this goes.