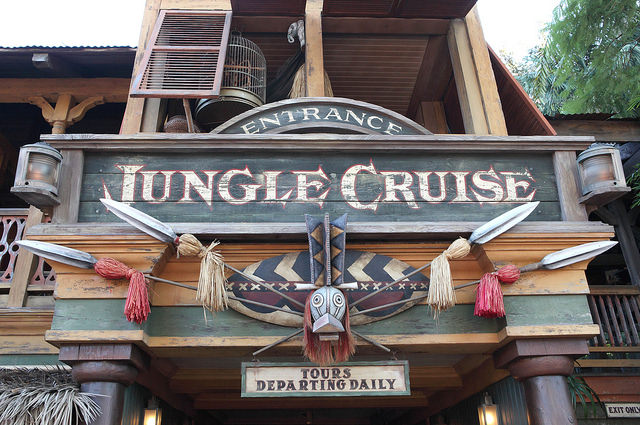 Hungry? (Photo by Sam Howzit via the Creative Commons on Flickr)

Disneyland is inviting hungry and intrepid adventurers—and anyone else willing to shell out $300 per person—to eat breakfast aboard the theme park's famous Jungle Cruise ride.

The newly-launched Jungle Cruise Sunrise Safari Breakfast—which premiered yesterday and runs to December 2—apparently includes a lavish and "wild" assortment of breakfast treats as you journey by boat through Adventureland's African savannah, reports O.C. Weekly. You'll also be trained and certified as an "official unofficial" skipper of the boat, and receive a special "Tribal Mask keepsake," so you can brag to all of your non-skipper friends.

And not to worry, you won't be eating "Fricasse of Giant Stag Beetle" or "Filet of Rock Python" as the ride's crew menu suggests. The Jungle Cruise breakfast—which according to Disney is "inspired by the jungle diet of the rare 'brunching tiger'—includes a pretty delicious sounding safari spread. You'll be treated to "fresh pastries, exotic fruit & chia parfaits, eggs, glazed pork belly bacon, pan-seared sausage and roasted gold potato & onion hash along with an assortment of juices, freshly brewed coffee and specialty teas." Sorry, no Bloody Marys or Mimosas in alcohol-free Disneyland, you'll have to head over to California Adventure later on for the booze.

Besides the steep price and putting up with tons of jungle-themed dad jokes from your guide, there are also a few other caveats to dining while on safari in the park. The breakfast cruise takes place before the park opens to the public—hence the "Sunrise" part of the name—which admittedly sounds cool, but also means that you have to get up super early for the 5:30 a.m. or 6:30 a.m. start times. The price also doesn't include admission to the park, so after you feast aboard your cruise, you'll be escorted out of the park. If you've purchased admission to the park—or have an Annual Passport—you can reenter the park when it opens for the day. You also pre-pay for the whole meal and experience when you book your reservation.

Unless you're already getting out your checkbook to sign up, you may be wondering who would cough up that much money to eat on the Jungle Cruise ride so early in the morning. Well, it seems that a lot of people have decided the cost is worth the adventure. According to the O.C. Weekly, there are only a few spots remaining and only on weekdays before the special ends.

Of course, you could also start your day with a Dole Whip, beignets from the Mint Julep Bar and a Monte Cristo from The Blue Bayou Café, and ride the Jungle Cruise with the rest of the commoners during normal opening hours—but we'll let you make that call.