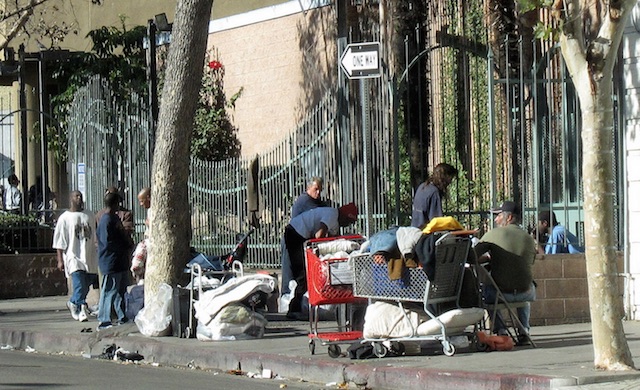 Homelessness in Los Angeles is so bad that the City declared it a local emergency this morning, and approved $100 million a year to spend on solutions. And Skid Row is so filthy that the CEO of a rescue mission said he caught three different forms of bacteria while walking around, eventually rendering him unable to walk ever again.

Andy Bales is the CEO of Union Rescue Mission. Two years ago, he managed to catch three different types of bacteria: E. Coli, Strep and Staph, L.A. Weekly reports. The infection got so bad that Bales may have to get his leg amputated, and his doctors told him that he will never be able to walk again.

Bales believes he got the infection while on a "water walk," which is when he walks around and gives water bottles to the homeless. Bales had just completed a triathlon, which he said left him with a blister on his foot. Even though Bales said that he wore protective boots on his water walk, he believes the bacteria still found a way inside his body. Bales is also diabetic and had a kidney transplant only a matter of weeks before he completed the triathlon.

Bales told L.A. Weekly that the infection spread rapidly and that his foot "looked like [something out of] The Walking Dead."

Doctors put Bales on an antibiotics drip for six weeks and ended up having to remove a bone from his foot. He can now only walk very slowly when using a special boot, and he is frequently in pain.

"There are many other vulnerable people like me, diabetics, that are on these streets," Bales said. And while Bales had access to medical care, the residents of Skid Row often don't—or they don't know how to access it.

Los Angeles has over 40,000 homeless people, many of them congregating on Skid Row and Venice. Bales believes there about 4,000 people downtown, including children. Bales said that it's also gotten worse, with more violence. He said his staff is afraid to walk to grab lunch. Skid Row has also been the site of a tuberculosis outbreak in the past, making the tent cities seem like they're from a third world country—not a city that's also home to the rich and famous.

"It isn't right to have precious human beings living and dying in this filth, on the streets of Skid Row," Bales said.

At this morning's announcement, City Council President Herb Wesson said that, "As a moral society, we have an obligation to provide shelter for the shelter-less. Today, we step away from the insanity of doing the same thing and hoping for different results, and instead chart our way to ending homelessness in Los Angeles."

The money will be used to find permanent housing for the homeless and to fund shelter programs, with the first payment slated for January 1, 2016.