Tito's Tacos DEMANDS That CicLAvia Be Shut Down [UPDATE] 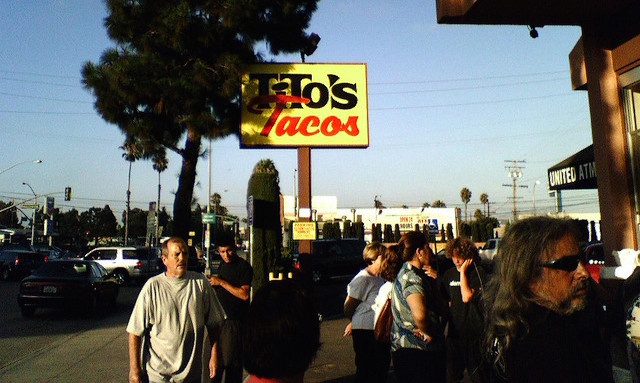 The classic Tito's Tacos, an institution in Culver City for 56 years. (Photo by Joi Ito)

Update: Tito’s Tacos Backpedals And LOVES CicLAvia After All!

Every CicLAvia event draws thousands of bikers and pedestrians to its route. So why, oh why, does Tito's Tacos owner want to shut down what should bring thousands of hungry mouths to their restaurant?

This Sunday's CicLAvia goes from Culver City to Venice—a 6-mile route that primarily goes along Washington Boulevard, Washington Place, and Venice Boulevard. One of the many stops along the way is the famed gringo-taco stand, which has been in business for over a half-century.

"I come here to express my utter outrage that the city and some non-profit group called CicLAvia will close Tito's Tacos on Sunday, Aug. 9, to our regular customers—many of whom come from as far as Santa Barbara, Riverside and San Diego counties," writes Tito's owner Lynne Davidson in an op-ed on the Culver City news blog The Front Page Online. "Some non-profit group?" That is some grade-A shade topped off with a little spicy salsa.

Davidson goes on to write that the forthcoming CicLAvia will totally ruin their year, as August 9 is "traditionally is one the biggest days of the year for us." If Culver City and that nobody-nonprofit don't cancel the "ill-conceived event" on Sunday (or at least just open the roads around Tito's for cars), then Davidson threatens legal action.

"We are not closing Tito's Tacos," Aaron Paley, co-founder and executive director of that small-time nonprofit CicLAvia, told L.A. Weekly. "If they make a decision to close that's their decision." He also said he's met with Davidson and Tito's Tacos, and says that the event will, duh, bring thousands of potential customers to Tito's. "We are coming," writes Militant Angeleno in his guide to CicLAvia. "And you will get A LOT of business."

Besides, all those people migrating from Santa Barbara, Riverside and San Diego counties can park on Sepulveda Boulevard and, god forbid, walk to the restaurant.