Let's Be Real: The Poke Craze Is Getting Out Of Hand 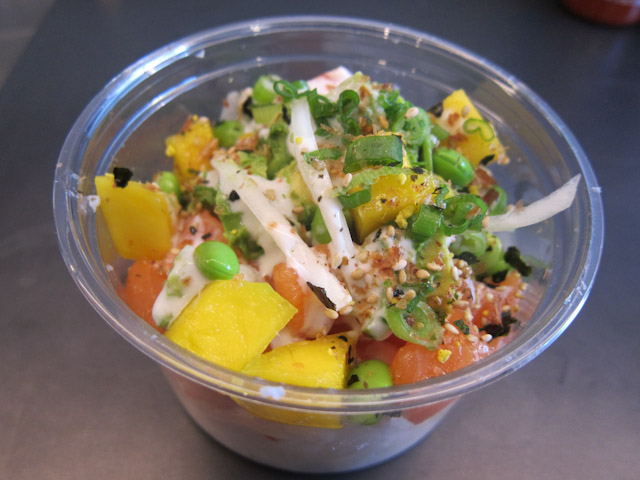 We can all agree that Hawaiian poke is delicious. But we have to say, the poke craze in Los Angeles is just getting ridiculous.

It's one thing that a huge number of build-your-own poke shops are popping up everywhere throughout the city—from Mainland Poke in Beverly Grove to Sweetfin Poke in Santa Monica. But the craze is getting so popular that even restaurant owners are completely changing up the concepts of their restaurants to cater to the marinated raw fish love, by closing their current eateries and reopening them as poke shops.

This week alone, Eater LA reported that not one, but two awesome spots were turning into poke shops. Chef Eric Park, who did the switcheroo in July with his Hero Shop—a downtown L.A. modern Vietnamese banh mi restaurant—and turned it into Ohana Poké Co., is doing the same thing with another popular restaurant of his. His Black Hogg restaurant in Silver Lake is closing its doors this Sunday, and will later reopen as another Ohana Poké Co. outpost. (We'll pour one out for Black Hogg's popcorn bacon. *single tear*)

Park cited that he's closing Black Hogg for now (though the popular Sopressata sandwich shop in the restaurant will stay open) because of family. He wrote on his website:

The reason being "quality of life" factors. See I really want to spend more time with the two little ones, and the pretty lady you see below (before all my hair turns gray). Running a full-service restaurant made it tough to do that. Maybe when my boy can start washing dishes, and my li'l girl can hostess, we'll get the place going again...

Restauranteur and gourmet pastry chef John Park did the same thing this week. He transformed his Ice Que, a shave ice shop in Alhambra, into Poke Stuf. The transition took only five days, Eater LA reports. We're also upset about this one because Ice Que brought us the funnel ice cream sandwich of our dreams, and had some delicious, gourmet Asian shave ice that we'll miss.

Don't get us wrong, we actually do like the tasty customizable poke bowls. But it is getting a little crazy how we're seeing poke shops at every corner we turn. It might just be making poke lose that je ne sais quoi.