We Tried Vromage's Vegan Cheese And Liked It 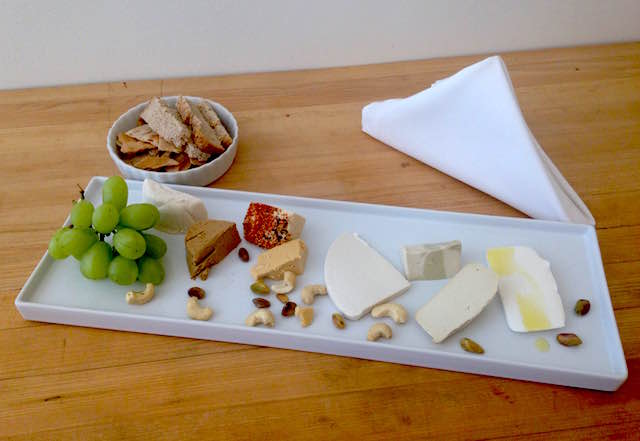 Vromage, a small West Hollywood vegan cheese shop, has developed a huge reputation as some of the best vegan cheese in the world. It's all made by one man who got into the business to impress a woman.

Yousseff Fakhouri is the man behind the vegan cheeses at Vromage—fromage being French for cheese, but with a 'v' for 'vegan.' He told LAist he doesn't keep recipes—rather, he prefers to have them all in his head. His shop is closed on Mondays and Tuesdays and that's when he makes the cheeses, but he kindly allowed me to stop by on a Tuesday to sample seven cheeses and discuss how he went from a meat-eater to an in-demand vegan cheesemaker.

Fakhouri, whose parents are Lebanese, grew up in Casablanca. His mother was a chef and he too learned how to make pastries and classical Moroccan cuisine. Eventually, Fakhouri moved to Santa Barbara where he opened a restaurant, then moved to New York City and worked in archaeology with some family members. Throughout this time, he continued to cook and travel often. When he eventually made his way to Los Angeles, he met several friends who were vegetarians or vegans. One in particular was a "beautiful young vegan" and chef who he found himself interested in and so, to win her favor, he experimented with a cashew cream sauce she had made.

"I didn't like [the sauce], so I manipulated the taste to impress her," he said. "I would use it as a way to spend time with her. 'Here, taste this!' Slowly, I saw myself making delicious cheese."

He continued to experiment with making cheese and from nuts and seeds as a way to woo the woman. And though this isn't a fairy tale story that ends with them being together, the plant-based courtship did change the course of Fakhouri's life and career. "She ended up with her girlfriend," he said, "and I ended up with my cheese shop."

Fakhouri gave up meat himself in 2009, though he isn't a vegan. He says he puts a little half and half in his espresso and enjoys a dessert made with butter or milk from time to time. He said that he now does have an awareness for animals, which only kicked in after the cheesemaking. The shop he said, similarly, isn't just for vegans, though many certainly visit—including members of animal activist groups. Vegans, he reasons, will continue to not eat meat or dairy no matter what, but for others, he calls it "conversion by taste."

Fakhouri, who lives in the same neighborhood as his shop, worked on his vegan cheese for five years before he felt ready to debut the shop. He said he would take the cheese to parties and place them on a table and see who would be fooled. "When I could trick the French and Italians, I knew I had a product," he said.

And trick you, he can. The Yelp page for his shop is full of rave reviews from vegans, the lactose intolerant and the curious. I personally am not a vegan, though I am someone who limits dairy and has tried and failed to find a vegan cheese I like. Fakhouri gave me a small sample of his goat cheese, six slices of cheese and a 'faux gras.' These samples included a brie with truffle, a pepperjack, a spicy cheddar, a white cheddar, a bleu cheese, a manchego and a feta. Each one had a soft texture (which worked very well for the feta and goat), and each reasonably passed for its namesake when spread on a cracker. The pepperjack—flavored with sesame, pepper, paprika and cayenne—was perhaps the least true taste, and the spicy cheddar I liked for its kick. But some of them really floored me. My favorite was the brie with truffle followed by the sharp white cheddar. The latter was Fakhouri's favorite, he said, but only "for the week." This cheese Fakhouri ferments for longer, and it has a smoky flavor. The faux gras did taste like a liver pâté, though in the interest of full disclosure, I've never had foie gras itself. This is made with truffle, chestnuts, pine nuts, hemp and sunflower seeds.

To try to compare each sample to a dairy cheese is a little outside of Fakhouri's intentions. Fakhouri said he only calls his vegan offerings by traditional cheese names for convenience, saying people like to be able to relate them to dairy cheeses. Though, he says, the idea is "not to replicate, but to make a new food that tastes better."

Fakhouri uses nuts and seeds to make his cheese and while he'll tell you what's in a cheese, he doesn't reveal exactly how he makes it. Some of his cheeses involve other flavors: he makes a brie with truffles—whole truffles that he peels first—and he has spicy pepperjack and cheddar options. The cheeses are fermented (some more than others) and he makes his own vegan cultures. He does not use almonds because of the drought and because they have an overpowering flavor. He also does not use soy, preservatives, miso or nutritional yeast.

Demand for Fakhouri's cheese has been high, but because he makes it all himself in a tiny space, he finds he can barely satisfy his own neighborhood. As Vromage grows, Fakhouri says he will have to teach people by letting them watch him make the cheese. He says he has never learned to write down a recipe. Of course, he won't teach just anyone. "You have to be humble," he says, "and want to help the world." In other, larger locations, Fakhouri envisions something of a museum where customers learn about eating vegan, nutrition and fermentation.

Visitors to Vromage will be able to taste and purchase cheeses, and they can also stop by to get a sandwich for lunch. Fakhouri makes grilled cheese and Caprese sandwiches, mainly to show how his cheese can melt.

Prices are comparable to those found in any other high-end cheese shop, with cheeses selling online for around $20 for a half-pound and lunch items (sandwiches, salads, etc.) priced at about $12.