City Plans To Give The Griffith Park Teahouse A Second Life 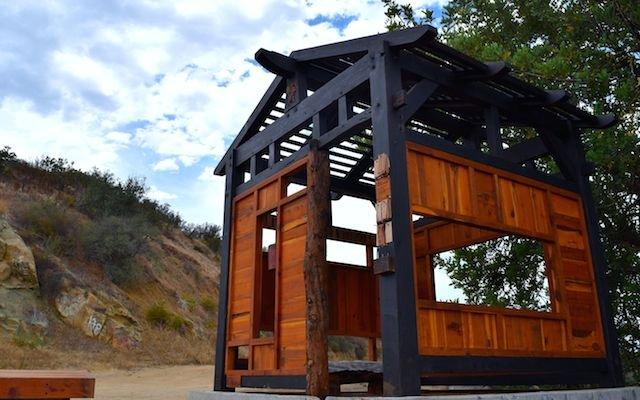 It looks like not all is lost for our precious little Griffith Park Teahouse up in the hills. Fans have been worried that the teahouse would soon be removed, but it looks like it's been saved and could just be moving to a different location.

Rose Watson, the Public Information Director for the L.A. Department of Recreation and Parks, tells LAist the anonymous art collective behind the wooden, Japanese-inspired teahouse came to an agreement with the city about two weeks ago, in which they agreed to donate the artwork to Los Angeles. Now, the city owns the teahouse. They just need to figure out what to do with it now.

There are a few different options. They could move it to a different park within the department's system of parks, or even use it as a traveling piece of art. They haven't decided when they'll remove the teahouse from Griffith Park yet.

"Because everybody loves it, we don't want to destroy it," Watson says. "We want to keep it."

Watson says the artists put up the teahouse illegally, which was the reason why they had talks about removing it. Since Griffith Park is a historical landmark, any time the city wants to put a piece of artwork in the park, it has to go through a long process to be approved.

The Griffith Park teahouse popped up in late June on a ridge in the park, overlooking the city. The serene teahouse gained a fervent following, as fans trekked there to write wishes for Los Angeles on the wooden boards hung alongside the structure's wall, and then ring a bell to seal the wish. When the artists behind the teahouse tweeted that the structure was in danger of being removed from the park, supporters even started a petition to keep it standing.

Looks like we can still keep on making those wishes, maybe just at a different location.