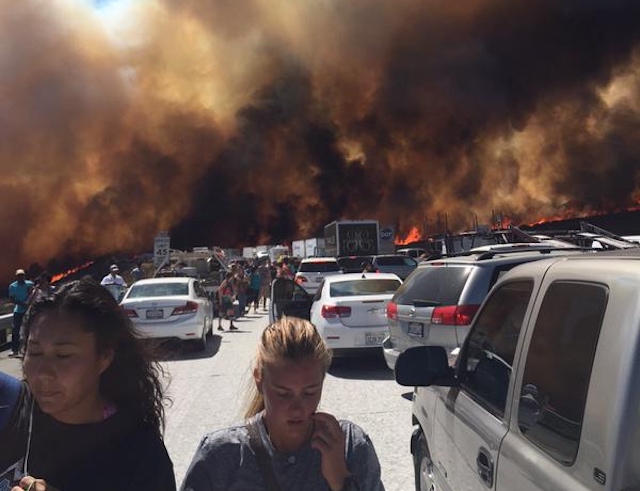 Although the 15 freeway has been reopened for weekend warriors on their way to Vegas, the fire that destroyed several cars rages on in its second day.

On Saturday morning, officials said the North Fire was only 5% contained, although the storm rolling through Los Angeles this morning should help firefighters in their efforts. According to the L.A. Times, 3,500 acres have burned and 44 cars and at least four homes have been destroyed.

KTLA says 20 of those cars were stuck on the pavement of the 15 freeway, including two big rigs and a boat being towed. The flames jumped the freeway and consumed the trapped cars. Luckily, no drivers were harmed, and authorities reported no major injuries as a result of the fire. The freeway was reopened after midnight.

"Cars were going in the opposite direction into traffic," Gilbert Cagatin told the L.A. Times. "It was that bad."

Talia Sclafani and her soccer teammates were traveling from Las Vegas to San Diego for a tournament when they had to leave their van. "To our left, it was like a spark and then five minutes later the freeway was engulfed," she told CNN.

One witness on the ground captured video of horses fleeing the North Fire and a DC-10 dropping flame retardant:

@guzman_eg6 holding it down with the live feed #abc7eyewitness


They bring the big boys out Repost @guzman_eg6

Incredible images of destruction along I-15 after wildfire jumps across freeway. V. @latimes http://t.co/R70QZgsoK7 pic.twitter.com/mlUkLHqfic

Meanwhile, only miles away in Wrightwood, the Pine Fire has has burned at least 125 acres after starting around 9:30 p.m., Friday night. Around 300 people have been evacuated, including deaf or partially deaf children and Girl Scouts in nearby campgrounds.