'Ant-Man' Scales Down The Superhero Movie To Something Fun 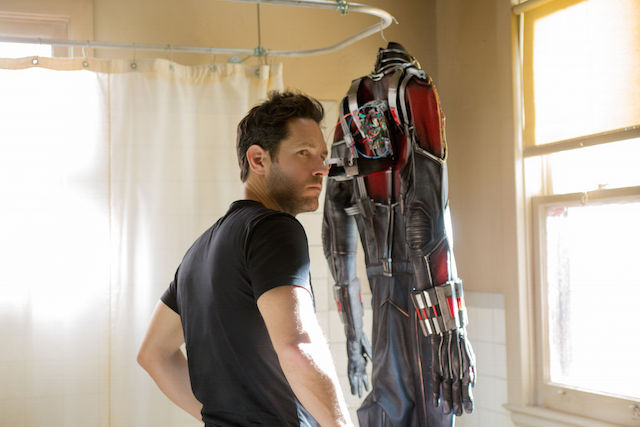 Paul Rudd is Scott Lang a.k.a. Ant-Man (Courtesy of Disney/Marvel)

The world can only be saved only so many times, and after a while stakes are continuously set so high in the Marvel Cinematic Universe they're rendered meaningless. This is one of many problems that have plagued the MCU, a cinematic spectacle that plows its way onto our movie screens twice every year to take away our money and precious time. Thankfully Ant-Man, the latest entry in the Disney/Marvel money train, scales down its spectacle—and hero—to finally make a superhero movie that's fun, loose and not overbearing. In other words, it's what I hoped Guardians Of The Galaxy would be.

Yes, the fate of the world does hinge on Scott Lang (Paul Rudd) saving the day in Ant-Man. But Rudd is able to channel enough of his warm, goofball charm to counterbalance Marvel's typically hokey pathos in his role as an ex-con looking for redemption. (As a side note: this Bay Area native couldn't help but notice that his ride back home into San Francisco took the looooooooong—and more scenic, of course—way home from San Quentin.) He just got out of the slammer, but his heart is in the right place. After all, this convicted electrical engineer's burglary charge was for a Robin Hood-like act of Silicon Valley espionage.

Lang finds it tough to hold even a job at Baskin Robbins due to his criminal past (quite a cinematic liberty, since it's not hard to land back on your feet in the tech industry if you're a white, educated male). But he needs some sort of work in order to pay child support and see his daughter.

Through a pleasantly silly and convoluted plot device, Lang soon finds himself under the tutelage of Hank Pym (Michael Douglas), a researcher who hid his life's work—the shrinking abilities of the "Pym particle"—for fear it would become weaponized. Pym's too old to don the Ant-Man suit and infiltrate the laboratory he founded to ensure his former protege Darren Cross (Corey Stoll) doesn't sell the technology to the bad guys, but he likes what he sees in Lang. Never mind that his daughter, Hope (Evangeline Lilly), is the better person for the job. At least this time Marvel inserted a somewhat-reasonable plot excuse—overprotective paternal instincts—for why the woman has to take the backseat once again.

Make no mistake, Ant-Man is through and through a paint-by-numbers MCU product. Although the studio has recruited some fairly interesting names to helm some of their titles (Kenneth Branagh for Thor and Shane Black for Iron Man 3 come to mind), its overreaching aesthetic dominates. It's no surprise that the idiosyncratic Edgar Wright (Shaun Of The Dead, Scott Pilgrim vs. The World) dropped out of directing Ant-Man due to creative differences, although the British director retains a story and screenplay credit.

While director Peyton Reed (Bring It On, Down With Love) won't be convincing anyone he's an auteur of the highest order with Ant-Man, he's able to occasionally show off his knack for visual comedy. The story's comic book shrink-ray technology certainly makes it easy to have fun with size contrasts. A Thomas the Tank Engine toy set becomes a grand train chase, and Ant-Man's ability to dole out punishment even at a microscopic level makes the ass-kickings akin to the violent chaos of Tom And Jerry. Even more clever is how Reed depicts the shaggy-dog stories told by Lang's sidekick Luis (the gifted Michael Peña). Drawn out stories of he-said-she-said, each character in his anecdotes has their lips hilariously synched to Luis's own recounting.

When the film must go through its requisite action sequences, Reed scales them down to size instead of incurring a city-sized level of destruction that cheaply taps into our post-9/11 anxieties. The infiltration of Pym's laboratory becomes a heist caper, where the heroes get by on a mix of guile and wit to go along with the brute force and explosions. Appropriately, the finale takes the ultimate showdown to a family home and even, at the risk of a potential spoiler, literally within a character, when Lang shrinks small enough to venture into The Great Beyond, suggestive of Interstellar and even, dare I say, 2001: A Space Odyssey.

A post-credits stinger, which it seems every MCU film is contractually obligated to have, teases that "Ant-Man Will Return," but sadly no Ant-Man 2 is on Marvel's upcoming schedule of ten movies. It seems likely he'll be folded into an Avengers sequel. While Ant-Man suggests that something fun and creative can be done with the Marvel template, I'm not holding out hope.