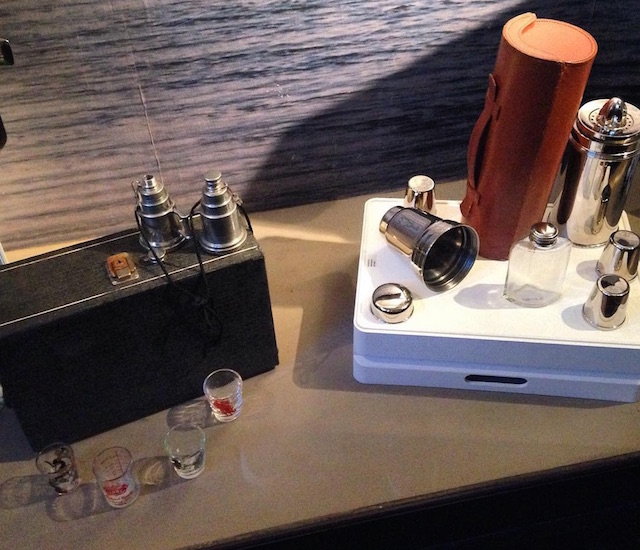 The next time you go to downtown's Seven Grand, you'll be able to learn a little bit about the history of drinking, while you're drinking.

Museum of the American Cocktail in New Orleans launched the first of three permanent Los Angeles exhibitions late last month: The MOTAC Whisk(e)y Gallery in Los Angeles. This particular show focuses on whiskey (or whisky, if you're Scottish or Canadian) and it's fittingly located inside 213 Hospitality's downtown whiskey bar, Seven Grand.

Keeper, originally from Austin, is an aficionado when it comes to cocktails and their history. He can tell you story after story from the annals of drinking lore. He also goes on huge purchasing trips all over the country, buying thousands of vintage pieces for resale in his shop or online, or to be used in bars, TV or film. He often packs up his scores with the help of actors at a theater in Wisconsin, then ships them to Los Angeles, where he photographs them and adds them to his inventory. His extensive knowledge earned him a gig choosing period-accurate glassware for the oft-imbibing characters on AMC's Mad Men, and if you frequent speakeasies and mixology bars, you've probably sipped from a glass that Keeper helped the bar heads choose.

There are a several points of interest to pay attention to as you stroll the gallery, though Keeper has a few favorites.

After you climb the stairs to enter Seven Grand, you'll see to your right a case full of glasses with images of women in various stages of undress. These are 'nudie' glasses. Keeper said that back in the day, you'd apply the adhesive to the glass yourself. Some women are in bikinis, but some are totally nude, depending on the year they were made. Nearby, in the window at the head of the stairs, you'll find a cocktail serving set that would come in handy at, Keeper suggests, The Hollywood Bowl. The cocktail shaker unscrews to reveal a couple glasses, a juice squeezer and even a spot for ice. This particular set was by used by the cinematographer on the set of The Wizard Of Oz.

You might also spot 'vaseline glasses' made with uranium, which Keeper said were common in the 1920s and '30s. The fun thing about these glasses is that they glow in the dark. You can also try to find an interesting toy that looks like a cigarette girl. You were supposed to put your glass in the hole on her tray, and then she'll shimmy and shake your drink for you. "Is it effective?" I asked. "No," Keeper laughed. 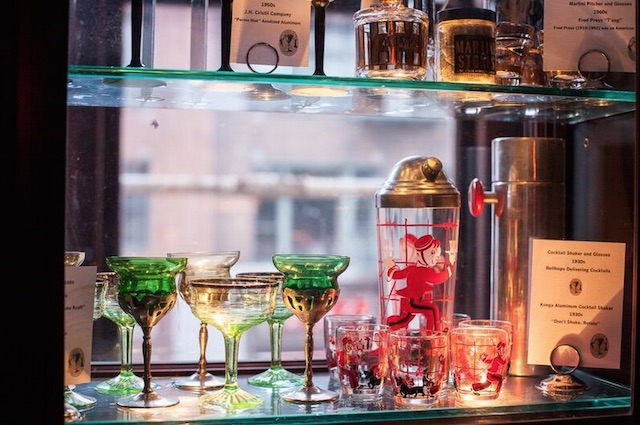 Vintage glassware at the 'boozeum' (Photo via SoFAB)

Phillip Dobard, Vice President of the SoFAB Institute and Director of MOTAC, explained how MOTAC came into being. It was founded by Dale DeGroff, also known as King Cocktail. DeGroff's father was in the Navy, meaning he moved around a lot as a kid. He eventually wound up in New York, pursuing a career as an actor, then ended up in Los Angeles working as a bartender at the Bel Air Hotel. DeGroff once again returned to New York, and opened The Rainbow Room at the Rockefeller Center. DeGroff first founded MOTAC in New Orleans. After Katrina, DeGroff moved MOTAC to the Commander's Palace Restaurant in the Aladdin Hotel & Casino in Las Vegas. After that hotel closed, the museum moved to New Orleans, renting a space from SoFAB. Soon, given that the two were so intertwined, they merged.

Dobard said that MOTAC will soon open a rum exhibition inside Cana Rum Bar and that when Clifton's finally reopens, there will be an exhibition there, too. (We've been waiting forever but we hear it might open before October!) The exact details of the Clifton's gallery have yet to be revealed, though the weekly tastings that MOTAC used to host at Three Clubs in Hollywood will be moved there. The tastings are currently on hiatus.

MOTAC also hosts a monthly seminar, though Dobard says perhaps seminar is too dry of a word as these educational events are certainly of the "liquid" variety. Their next one—Bombs Away! For the Sake of Sake—is July 22 at The District in Beverly Grove. Guests will get to sample Vietnamese cuisine and sake both neat and expertly mixed into cocktails. (More details here.)

MOTAC's gallery at Seven Grand is free—though you should probably order a cocktail—and open whenever Seven Grand is open. We suggest popping by during happy hour so there's still a bit of daylight. It's daily from open to 8 p.m. and specials includes $5 select whiskey cocktails and $4 beers. The pieces in the gallery will be refreshed every few months.