'Tangerine' Director Explains Why He Shot His Movie Entirely On iPhones

It was easy to see why Sean Baker's Tangerine—a micro-indie drama about two transgender working girls at Santa Monica and Highland, set within one day and shot entirely on the iPhone 5s—garnered the most buzz when it premiered at this year's Sundance Film Festival. That last sentence probably gave you a "bingo" if you were holding a Hyped Indie Movie Bingo Card.

Thankfully, Tangerine is more than just a gimmick. For starters, you'd never realize it was shot entirely on smartphones, as Baker and his cinematographer Radium Cheung never resort to making the film resemble found footage. Instead, the sharpness of the footage and vividness of the colors inject a certain energy into the film.

Even without the heightened visuals, Tangerine has plenty of spark in its two leads. Kitana Kiki Rodriguez is the motor-mouthed and fresh-out-of-jail Sin-Dee, who casually drops "bitch" every other sentence and is determined to track down the "fish" (cisgender woman) her pimp boyfriend has been sleeping with while she was in the slammer. Tagging along is the more level-headed Alexandra (Mya Taylor), Sin-Dee's best friend who seems to be the only anchor keeping Sin-Dee from wreaking havoc across all of Los Angeles County in search of the "fish." Although neither Sin-Dee nor Alexandra seem to particularly care about the holiday, the fact that its Christmas Eve lends an added layer of urgency to the film—as if they have until midnight to set things straight because it's Christmas, goddammit.

A zany buddy comedy at heart, Tangerine is littered with irreverent punchlines and questionably-P.C. zingers all mainly delivered by Sin-Dee ("They all think they're Lil Wayne," she says about a young black boy who skates by). But its lighthearted trappings don't belie the compassion that Baker and Chris Bergoch's show for Sin-Dee and Alexandra—a sentiment not necessarily afforded to them by the rest of Los Angeles that surrounds them on the street.

Earlier this week Sean Baker took some time to speak with LAist about Tangerine and shooting the film on iPhones and where he discovered his two lead actresses. 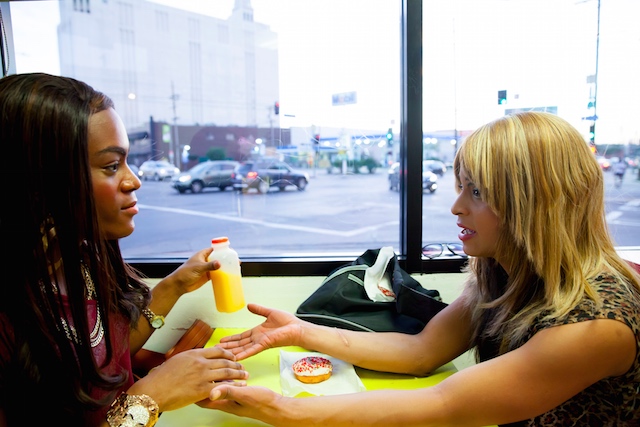 Mya Taylor and Kitana Kiki Rodriguez hang out in the Donut Time at Santa Monica and Highland in 'Tangerine'. (Photo Courtesy of Magnolia Pictures)

Why did you choose to shoot 'Tangerine' on the iPhone?

I wish I could say that we were looking for something new, but basically it all came down to this: we had no money. We had way less than half of the budget of my previous film. We were out of favors and we couldn't shoot on film or the higher-end cameras. And then it was down to the DSLRs, [which would] increase the size of the crew by about three members and we simply couldn't afford that. And on top that we would need to have purchased some pretty expensive lenses to make the film to set us apart from the other films shot on DSLR.

I hadn't thought about this for years, but just the other day I realized it goes back to when I saw Spike Lee's Red Hook Summer. In it, there's a kid walking around with an iPad and every time they cut to the iPad I was intrigued. I thought it looked beautiful. I was wondering why nobody was trying this. There were a few films out there that used the iPhone or the iPad in a way like found footage, but I thought maybe we should take this where we're actually trying to emulate film—somehow elevate it to a cinematic level.

I went on Vimeo and there was this one channel that was focused on iPhone experiments and short films and I was really impressed with what I saw. Very impressed—but I wasn't sold yet. And then I came across a Kickstarter campaign for a company called Moondog Labs and they had created this anamorphic adapter that fits over the iPhone lens and allows you to shoot true 'Scope [2.35:1 aspect ratio]. I thought, "It might not be the first iPhone movie but it'll be the first iPhone movie shot in 'Scope."

In conjunction with this $8 app called FiLMiC Pro... we shot some tests, showed it to our executive producers, the Duplass brothers, and we all agreed, "This is kind of cool, let's go for it."

Were there any limitations you came across while shooting with iPhones?

No, quite honestly. It was really pretty painless. Once we swallowed our pride and accepted that we were shooting on this device—especially my cinematographer, who had come over from shooting The Americans and was like, "Are you kidding me, we have to do this?"—the workflow was surprisingly easy. As soon as you get it onto your computer, it's like editing any other media. 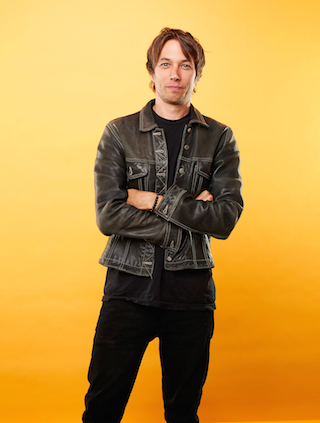 'Tangerine' director Sean Baker (Photo courtesy of Magnolia Pictures)
How did you discover Kiki and Mya?

[Co-screenwriter] Chris Bergoch and I found Mya when we couldn't get a lot of traction. We knew going in that we're not from that world. We were cisgender, white, straight guys and we knew we weren't about to go in there proposing any script or plot. We basically were looking for a collaborator. There wasn't much traction from approaching people on the street because they thought we were cops, so they didn't really engage with us. They didn't have time. They're working girls who were working.

We ended up walking to the local LGBT center one day where people hang out. It was a nice spring morning, and we came across Mya and her friends. Mya stood out amongst all. She's the one that had this thing about her. We approached her and she immediately showed enthusiasm and we exchanged information. Soon enough we're meeting with her on a regular basis and she's telling us about stories in the neighborhood, introducing us to friends who worked the streets and knew her quite well. It was one day she brought Kiki to the table, and she sat next to Mya, and it's like, "Wow. The two go well together." They contrast and complement each other and have to very different personalities. And I said "You know what, you're going to star in this film. Both are you going to be in this movie. We're going to write characters for you two to play."

Was there not much of a story until you met Kiki and Mya?

All I said was this: it takes place in one day (we have a very small budget and it's easier to shoot a film that takes place one day because you don't have to worry about the costume changes, et cetera), and it's about two people coming together, and all of our characters have to converge together at Donut Time [the shop at Santa Monica and Highland]. It's going to be a climactic moment in that locale. Those were the only three ideas I had.

Over the course of the next few weeks, Kiki goes, "I have an idea! There's something that almost happened in real life." It was a story that never played itself out to fruition. It was something that a girl was contemplating in the area because she found out her boyfriend was cheating on her with a "fish."

At first we were like, "What's 'fish?'" She explained it to us, and Chris and I thought that was really dramatic and layered, and it takes our characters on a journey. It all came from that wonderful recommendation of Kiki's. We wrote a treatment and presented it to the girls—because we wanted them involved in every step—and they gave us their thumbs up and a few notes and we went forward with writing with them.

How does being a transplant inform your perspective of Los Angeles in the film? One of the characters, an Armenian grandmother, says something that's a cliche for an outsider to say: "Los Angeles is a beautifully wrapped lie." How does your outsider perspective come into 'Tangerine'?

It's hard to say. I really do love L.A. and I don't feel the way her character feels in the movie. But I do recognize that a lot of people do feel that way. The whole movie is about presenting different viewpoints.

OK this is going to sound weird but... both this film and Starlet, my previous film, take place in L.A. I wanted Angelenos to really appreciate this movie and make it feel like it was made by one of them. That was my goal. I wanted to present a part of L.A. that I haven't seen on film before. When I first came to L.A. and started exploring it, I started to see the L.A. that we see in film and TV is only the Hollywood sign, Beverly Hills, Venice, and that's about it. Maybe the Walk of Fame. There's so much more. So much more.

I came across a few locations where I thought, "There must be a ton of stories that take place here on a daily basis. Why hasn't this been exploited as a subject matter?" So it was really this way of presenting a very... I'm not going to say "realistic" because its film—so it's elevated to a certain degree with pulp and campy aspects to it—but at the same time I wanted the authenticity be there. That was extremely important. I wanted an Angeleno to think, "I feel that this was made by one of us."

Your filmography is filled with the perspective of people on the fringe, outside, or lower classes. What is it about these perspectives that intrigues you so much?

It's purely a response, I think, to the other side, the stuff that we see to much in film and TV. It's a desire to see more diversity and see communities we haven't seen represented before.

It's also, at a very selfish level, a way for me to explore and become literally friends with people in communities I would normally not be able to connect with. It seems strange to say, but it does come from a selfish point of view. I walked away with Prince Of Broadway with lifelong friends I've made—undocumented immigrants I normally would not be social with because that's the world we are in today, a segregated society. Now I have Mya and Kiki I can consider friends. It's a way of expanding my own horizons.

Tangerine opens today in Los Angeles, New York, and Toronto with a wider release to follow. This weekend, cast and crewmembers, including Sean Baker and Mya Taylor, will be at select screenings at the Arclight Hollywood for Q&As.