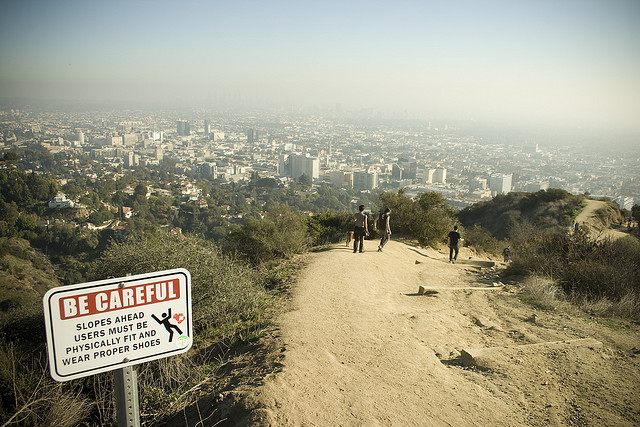 BE CAREFUL: Don't leave your selfie stick at home! (Photo by pht0matt via the LAist Featured Photos pool on Flickr)

This week's edition of Overheard in L.A. features bits of overheard conversation from people suffering a devastating tragedy in Runyon Canyon, who took the latest trendy food class, and some model parents.

Tragedy Of The Week
"Oh NO, we forgot the selfie stick!!!!"
via @SalleyRaeHamer at Runyon Canyon

Gotta Start 'Em Early
"How did they get their baby to wear a fedora?"
via Rosie S. at the Hollywood Farmers Market

Parenting Done Right
"The baby probably has a contact high. I hope she's okay."
via @tumbry

That's Not Real. Right?
"Do you guys have hemp milk?"
via @KianaParkerat Starbucks

Something To Aspire To
"I've never fucked a Native American. They're very hard to find."
via @OwenVoice

Metaphors
"I'm having a hard time understanding how the M&M's relate to his spiritual life."
via @_snork_juice_ at USC Film School