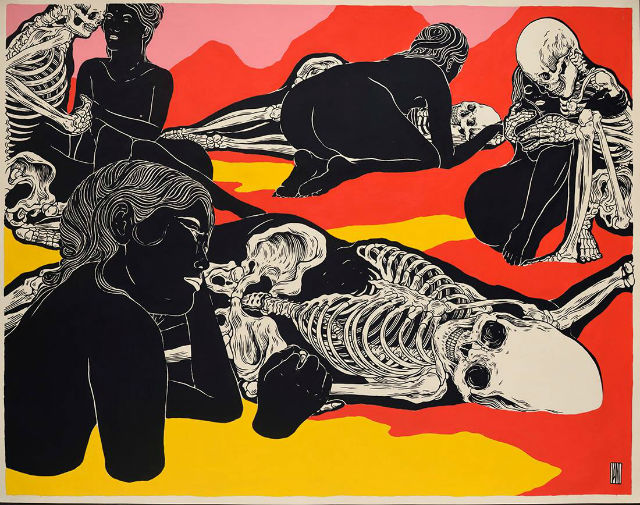 A new exhibition by the Israeli Broken Fingaz collective opens at the Howard Griffin Gallery in DTLA on Saturday night. (Image: Courtesy of Broken Fingaz).

LAist gets a lot of event announcements, and we comb through them all to bring you a carefully curated list of what’s happening in LA this weekend, including these 21 events. Don’t forget to check out our June Guide, too, for other suggestions including the Hollywood Bowl’s opening weekend, Bayou Fest and Beer Week. We’ll be back on Monday to help you plan the week ahead.

DODGER WALK: On Friday night, the Dodgers play the Giants—why not give up your car for the night to get to the stadium? Los Angeles Walks has teamed with Metro to lead a short walk at 6:15 pm from the Chinatown Gold Line Station, through the hills of Solano Canyon to Elysian Park. Purchase tickets ($42) from Los Angeles Walks to benefit the organization, or buy your own ticket and join the walk for free. RSVP for the walk.

LIT: On Friday night at 7:30 pm, Skylight Books welcomes noted crime writer James Ellroy who, along with Glynn Martin, executive director of the Los Angeles Police Museum, produced a book on 1953 Los Angeles. LAPD ‘53 features imagery from the museum's photo archives, with accompanying text to illuminate the crimes and law enforcement policies of the era.

PERFORMANCE: The improv troupe Robot Teammate and The Accidental Party continues its run of Timeheart, a sci-fi musical, at the Hollywood Fringe Fest. Timetravel inventor Bruce Greenstreet is enlisted by an eccentric professor to find the Timeheart, the mythic center of spacetime, to save the future from destruction. There’s a performance on Friday at 8:35 pm at Theatre Asylum’s Lillian Theatre. Ages 10+. Admission is $15 ($12 for Fringe participants). There’s another performance this weekend on Sunday at 5:35 pm.

MUSIC: Grand Performances opens its season on Friday night at 8 pm with The Gaslamp Killer Experience. The L.A.-based DJ and producer brings his alt-hip-hop sound to the stage accompanied by a 10-piece band. On Saturday, Grand Performances presents Wattstax Revisited, an evening of music and dance that celebrates the historic 1972 Coliseum concert and film which featured Stax Records' Isaac Hayes, The Staple Singers, The Bar-Kays, Rufus Thomas, The Emotions, The Rance Allen Group, the Rev Jesse Jackson, Richard Pryor and many more.

FILMMAKER Q&A: I Believe in Unicorns, directed by Leah Meyerhoff, is a feature that explores the complexities of young troubled love. It runs at Arena Cinema from Friday through June 25, and each night Film Fatales presents a series of nightly filmmaker discussions. Panelists after the 7 pm screening on Friday include Meyerhoff, Executive Producer Castille Landon and crew. Tickets: $12. Over at the Arclight Hollywood, director Crystal Moselle, producer Megan Delaney and the wolfpack will do a discussion after the 7:15 PM showings of The Wolfpack this Friday and Saturday. At screenings of The Overnight from Friday through Sunday, there are a number of guests doing the Q&As, including actor Jason Schwartzman, producer Mark Duplass and director Patrick Brice. Tickets: $16.50.

ART: The collaborative multimedia project Alchemy of Waste integrates upcycled materials into art, “with a focus on unveiling and deconstructing collective perceptions of trash.” They’re holding a special event at Art Share LA on Friday from 8-11 pm with art, live performances, workshops and more. Tickets: $10-$20.

DANCE: There are two dance programs of note this weekend, running from Friday through Sunday. American Contemporary Ballet presents Astaire Dances II, which features Fred Astaire’s famous dance works with Ginger Rogers, performed with live music at the historic Farmers and Merchants Bank building in DTLA. Tickets: $40. At Cal State Dominguez Hills, The Central Avenue Dance ensemble presents the dance retrospective—History of Black Dance in America—that begins with the slavery era and runs through to today. The program coincides with the 150th anniversary of Juneteenth, commemorating the end of slavery. Tickets: $37.50-$40.

ART: Howard Griffin Gallery, NO WAY & Ghostown present the opening night party for the Broken Fingaz Crew’s latest exhibition, Journey Galactiko, on Saturday at Howard Griffin Gallery in DTLA from 7-10:30 pm. Broken Fingaz, the graffiti collective from Haifa, Israel, is known for its use of bold lines, pop colors and thematically and visually borrowing from ‘80s comic book illustrations, pulp horror as well as Japanese Shunga woodcut prints and paintings. Special guest DJ is Gaslamp Killer. The show remains on view through Aug. 2. RSVP for the reception.

WINE: There’s a Vegan Wine Social on Saturday from 8-11:30 pm at Buzz Wine Beer Shop in DTLA. The night introduces vegans and non-vegans to vegan wines paired with vegan treats, including the best vegan cheeses on the market. Tickets: $40 per person.

MUSIC: KCRW Summer Nights continues on Saturday night at One Colorado in Pasadena. The free, all ages show features the jangly pop of Cayucas and DJ Marion Hodges at 7:30 pm.

MUSIC: On Saturday at 3 pm, Baldwin Hills Crenshaw hosts a free kickoff concert for the upcoming 2015 BET Experience at L.A. LIVE (June 25-28). Playing live are Deborah Cox, Chrisette Michele and Jordin Sparks. Hosted by DJ MaL-ski of 102.3 KJLH-FM, the concert takes place on the Outdoor Promenade. Seating is on a first-come, first-served basis.

BURGER BATTLE: On Father’s Day from 11 am to 3 pm, Eagle Rock Public House hosts a duel between two burger masters. The Clash of the Burger Titans event pits original creations from Andre Guerrero of The Oinkster vs. Head Chef Kenny Cazares and Chef-Owner Ryan Harkins of Grill ‘Em All in Alhambra. Bring a friend and eat then vote. The winner’s burger will be featured in the loser’s restaurant for the next month. Eagle Rock Public House will also release a specialty brew just for Father’s Day.

MUSIC FEST: Dirty Laundry TV presents its Summer Fest on Sunday. The music kicks off at 2 pm and a swap meet runs from 2-6 pm. Performances by Colleen Green, Audacity, Rob Zabrecky and members of Possum Dixon, Mike Watt & The Missingmen, Gateway Drugs, The Frights, Kera and the Lesbians, Death Hymn Number 9, Girl Tears and more. Tickets: $10 before 6 pm, $12 after 6 pm. The event is 21+. 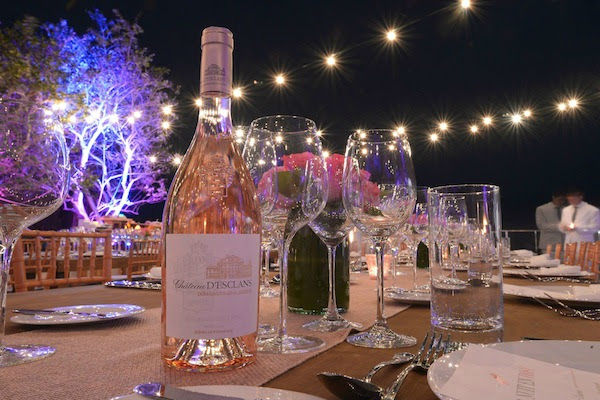 It's all about the rosé at the SkyBar on Sunday. (Image: Courtesy of La Nuit en Rosé, at the Miami Beach edition.

ROSÉ: After stints in NYC and Miami, La Nuit en Rosé—the world's first festival dedicated entirely to rosé wines and rosé champagne—comes to LA on Sunday at the SkyBar at the Mondrian Hotel. The event features more than 40 rosé wines from around the world, themed food stations, a VIP Lounge, a pool, outdoor lounge areas, a photo booth, a DJ and more. Tickets: $75-$125.

BEER + MUSIC FEST: Angel City Brewery honors dads with a Food Truck & Music Fest on June 21, from 12-8 pm. Enjoy sipping a cold one with your Old Man while listening to some jams and indulging a number of food trucks. The food truck lineup includes Dogtown dogs, Brewwings, The Surfer Taco, Peaches’ Smokehouse & Southern Kitchen and Fill R Up Gastro Garage. The live music lineup features Scott Bartenhagen, The Vignes Rooftop Revival, The Get Down Boys and Urban Grass.

FASHION + MUSIC: Dim Mak teams up with lifestyle company and retailer The Well to host Wavey—now a weekly pool party series at the Hotel Figueroa in DTLA on Sunday from 1-8 pm. Dim Mak curates the music with performances by Lauren Lane, Edit Murphy, Young Adults and Thee Mike B and Coco Disco x Cosmodrome by the 1920’s style hotel pool. Admission: $10-$20.