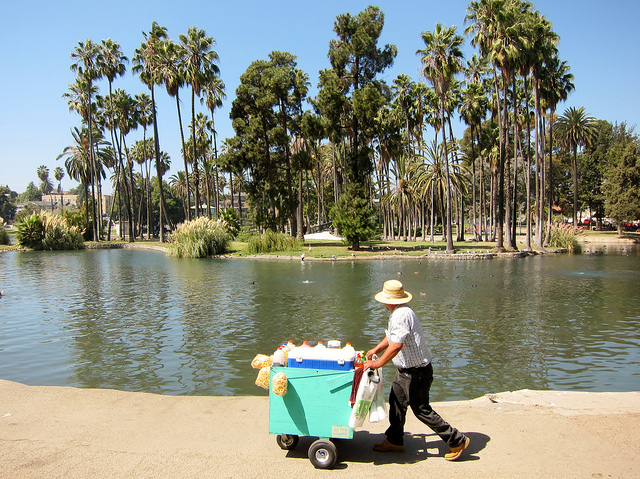 Ice cream! Hot dogs! Yoga! Many of your favorite summertime foods and outdoor activities are expected to soon disappear from L.A.'s parks and beaches with a reinstated ban on unpermitted vendors across the city.

The Los Angeles City Council voted last night to create a new set of rules that would impose escalating fines and possibly misdemeanor charges on almost anyone doing business in parks and beaches without city permission. The ban would prohibit many vendors from offering everything from exercise classes to popsicles, and pony rides to jewelry.

The restrictions are expected to have a devastating impact on those who rely upon these mobile businesses for survival. The revised rules, based on a previous ban, would still allow someone to sell paintings, books or other "expressive items" that they have created with the goal of protecting freedom of speech. But most of the refreshments we've been enjoying will likely be given the boot.

Currently, the city bans vendors from peddling their goods on sidewalks, but similar rules had been suspended for parks and beaches in the wake of two lawsuits, according to the L.A. Times. Supporters of the ban argue that it will protect the city from the legal risks of unlicensed vendors and keep public parks from being commercialized. Opponents contend that it unfairly punishes those who depend upon their business as an economic lifeline and that the misdemeanor charges could ultimately jeopardize some immigrants' chances at citizenship. Opponents also argue that the existing process for getting permission from the city to sell in parks and on beaches favors large concession stands, and permits can be difficult to come by for smaller vendors.

Lawyers are now drafting the new park and beach vending rules, and the City Council is expected to vote to approve them later this week. At the same time, the city is currently considering legalizing and regulating sidewalk vending, a move that could raise even more debate over the parks and beaches ban.