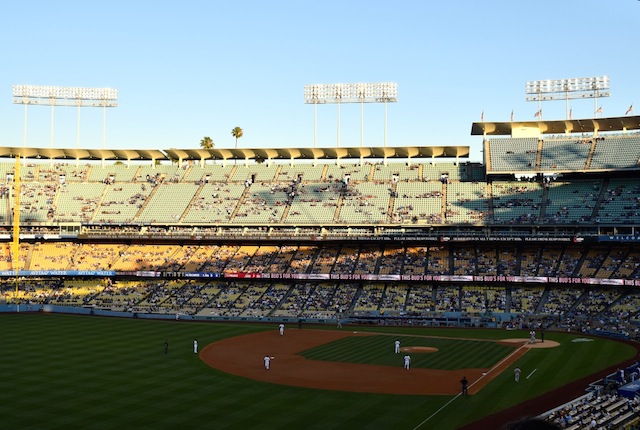 If you're a hungry baseball fan like us, you'll be excited to know there's a new starting lineup of food at Dodger Stadium now that baseball season is in full swing.

For many of us, going to watch a game is as much about indulging in Dodger Dogs and nachos as it is about watching Adrian Gonzalez's next at-bat. Thankfully, the Dodgers' new draft picks for their menu knock it out of the park and go beyond traditional stadium offerings.

While you'll see some favorites that have returned from last year like the grilled elote corn, prepare yourself for some change-ups like smoked chicken wings, new spins on L.A.'s famous street dog, and even a vegan option for nachos. Oh, and how about a Dodger Dog-stuffed pizza crust? Yeah, that's in the works, too. 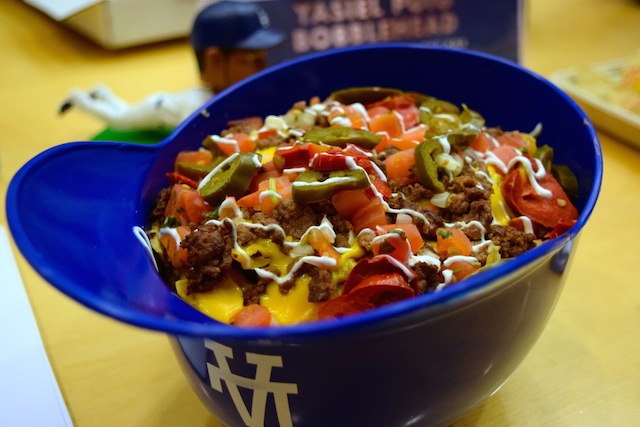 Nacho helmet, but it could be (Photo by Danny Jensen/LAist)

If you're a fan of nachos, you've probably been tempted by this major league-sized order of nachos at more than a few games. The good news is this year they've added even more nacho locations throughout the stadium. And for those looking for an alternative to the meat-loaded one seen above, now you can now opt for a vegetarian version with all the other fixings, or get one with vegan cheese. You can also order all of the nacho options in a regular-sized bowl, but then what are you going to wear on your head as you leave the game? 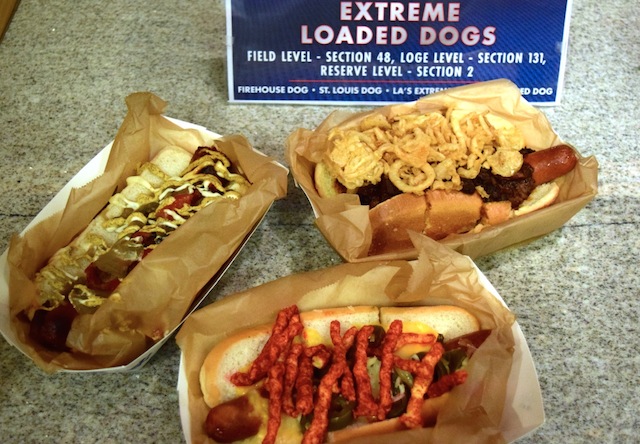 These dogs are so loaded, they might get kicked out of the stadium (Photo by Danny Jensen/LAist)

We do love our bacon-wrapped hot dogs in L.A. So, to bring some of the enticing flavors of our favorite street dogs into the stands, Chef Tingley has added new Extreme Loaded Dogs to the menu. These sluggers are wrapped in bacon, deep-fried and then piled high with toppings. You'll happily find the return of L.A.'s classic street dog version with peppers, onions, mustard and mayo. And this year they've added the St. Louis Dog with fried onions and short ribs, and—as tribute to L.A.'s firefighters—a dog smothered in nacho cheese and topped with jalapeños and Hot Cheetos. Yes, these dogs are delicious, and yes, you will need lots of napkins if you ever expect to wind up on the Kiss Cam. 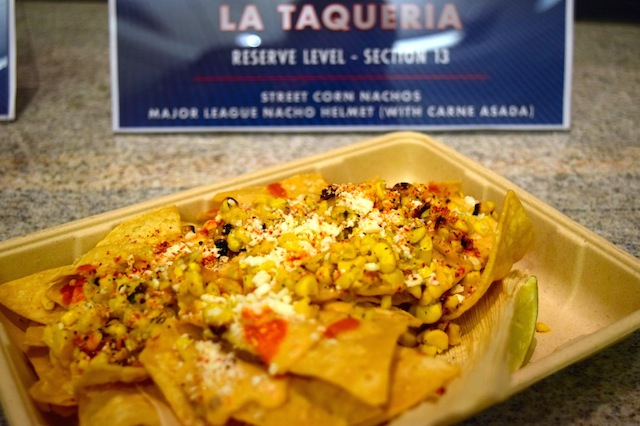 We were stoked when they added elote, also known as Mexican street corn, to the stadium's offerings last year. And now we're even more excited that Chef Tingley converted all of that grilled-corn-cheese-mayo-chili-powder-goodness into a plate of nachos. The spicy, sweet and smoky combination makes for a great pairing with a cold beer or a Michelada. The Street Corn Nachos are available at La Taqueria on the field and reserve levels, where you can also score the excellent Carne Asada Specialty Fries. 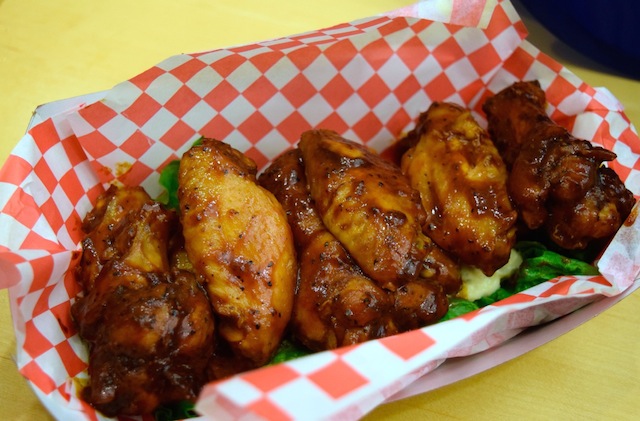 Think Blue BBQ won over lots of fans last year with brisket sandwiches and other barbecue treats, and this year they'll be featuring hot-out-of-the-smoker specials. One of this year's additions includes these smoked chicken wings. Tender and smoky these wings are smothered in sauce and offer a peppery tang. We wouldn't mind a little more heat to spice things up a bit, though. 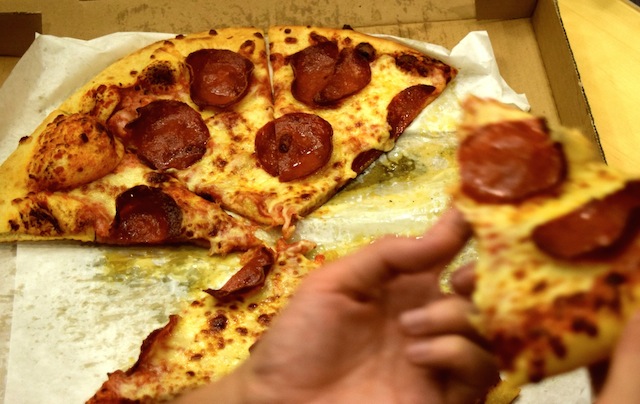 Alright, so the pizza pictured above is just like the Brooklyn-inspired pizza you may have tried last season on the new Tommy Lasorda’s Trattoria, but just wait. Chef Tingley hinted to us that sometime this season, he hopes to unveil pizza slices that have Dodger Dogs stuffed in the crust. We can only hope these mythical slices become a reality before the season is over. 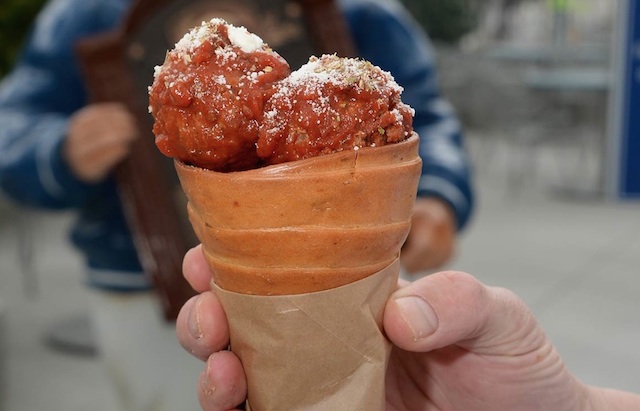 If you had the chance to enjoy the massive, marinara-drenched meatballs at the new Tommy Lasorda’s Trattoria last year, you're in for a cone-shaped treat. And if you didn't try them before, here's your meaty chance. The cone is a lot like what you might imagine when you read "meatball marinara cone": a tender meatball, doused in thick red sauce, balanced atop a cone of bread. Sprinkle on some parmesan cheese and you have yourself an impressive, yet challenging to eat, meat-version of an ice cream cone. We can only imagine this is what you've been needing in your life. 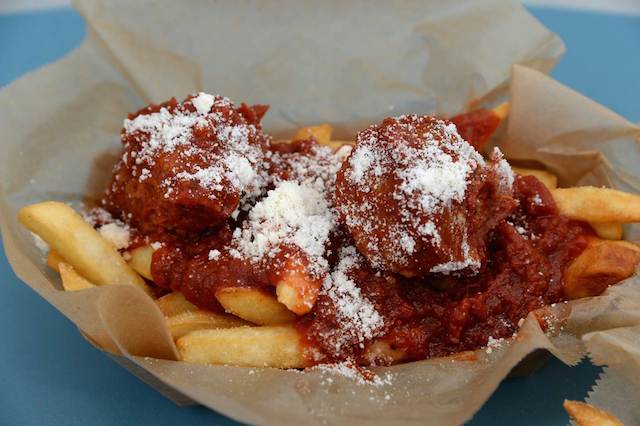 In case you're having trouble balancing your meatball on top of a cone or you're just looking for a way to devour more meatballs, we present you with Lasorda's Meatball Marinara Fries. Again, pretty much what it sounds like: french fries topped with meatballs, marinara and parmesan cheese. In other words: Meatball Magic. While they may not be for everyone, this spectacle is sure to be a homerun for many. We recommend many, many napkins.