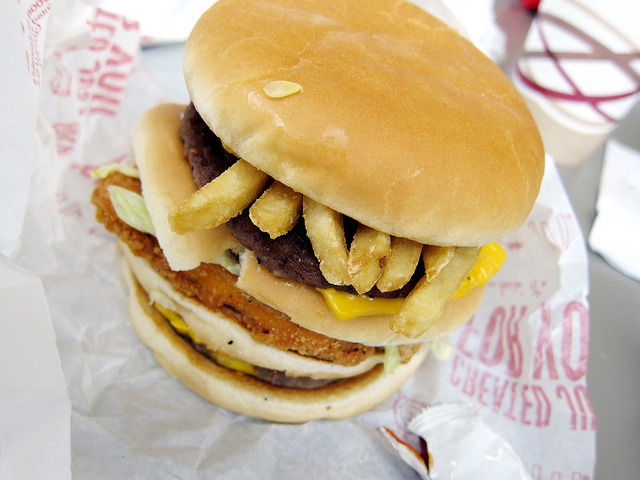 It's official: we are now living in the future. At least when it comes to ordering your burger at McDonald's.

The fast food juggernaut has quietly opened its only L.A. location that let's you fully customize your burger using entirely automated kiosks. That's right, you don't have to talk to a single human if you don't want to. The Create Your Taste kiosks—as McDonald's is calling the automated pilot program—arrived recently to a remodeled location in downtown L.A. at 201 W. Washington Blvd. And the restaurant is only one of 18 that the company is testing nationwide, according to the L.A. Times.

Instead of approaching the typical fast food counter, customers walk up to individual kiosk stations where they use a touch-screen to order. Instead of just picking the type of burger or meal you want, you can fully customize every component of your burger. You can pick whether you want a 100% beef patty or 1/3-pound of sirloin, choose the type of cheese you crave (sharp cheddar, pepper jack, or American), and even opt from a selection of buns like ciabatta, artisan rolls and even a lettuce wrap. And you can customize your toppings and condiments with the likes of chili-lime tortilla strips, guacamole, red onion slices, tomatoes, pickles, grilled mushrooms, and more. Even some of L.A.'s best burger spots don't let you customize that much (or at all *cough* Father's Office *cough*).

Once your order is placed, you'll receive a pager to alert you when you order is ready and your meal will be delivered to your table. Pretty fancy stuff. Is this really what the future of dining out looks like or just another stunt from McDonald's? Well, if you ask the brains over at the Harvard Business Review, they might tell you, "yes, it is." It seems McD's isn't the only one experimenting with using automated touch-screens in place of people. And many of the restaurants—which include both fast food and "fast casual" places like Chili's—have found a significant uptick in the amount of money people spend when using the touch-screens. So, the future may indeed already be here. Though it probably doesn't bode well for fast food workers.

How do these customized burgers of the future taste? Well, according to the L.A. Times, "Better than the usual McDonald’s fare, but there’s still a compressed-by-machine feel to the patty."

Wait until Kanye West hears about the new automated kiosks, now he'll have even more opportunities to not smile at people.