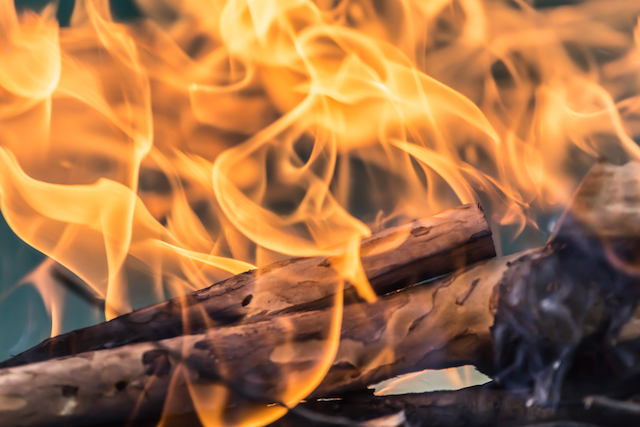 A fire has destroyed a Long Beach duplex that was previously the poster child for housing violations.

The two-story duplex at 2045 Orange Avenue in Long Beach caught on fire early Wednesday morning near 2 a.m., the L.A. Times reports. The fire seems to have started in a garage behind the home. Bruce Allen, a tenant of the duplex, said he was able to help his roommate, 61-year-old Larry Watson, into his wheelchair and escape. He also said a third man was able to get out of the apartment in time. There were no injuries.

Just the day before, the property was the center of another story. Allen and Watson had complained of a fight they’d been having with the building owner, Janet Bobbitt. They said that there was no running water in their apartment. Watson, who is using a wheelchair following surgery for bedsore removal, said his friends helped him by bringing water to fill the toilet and that he showered at motels.

Bobbitt had been sent an order to get the water turned back on, plus fix 19 other violations. However, five weeks after the first notice, Long Beach officials admitted they still hadn't actually gotten in touch with Bobbitt. She eventually received a $100 fine. Bobbitt's son Bryan told the Times that he's in charge of the property now and that his mother has dementia. He said that the building wasn't insured, and that the wreckage will have to be completely torn down and rebuilt. He called Allen and Watson—who said they had stopped paying rent in protest—squatters, and blamed the apartment's depressing state on the tenants.

Sorry properties like Watson's place and others is something Long Beach is trying to address. The City Council voted Tuesday to increase fines for landlords who don't make repairs. However, activists don't think that's enough. One problem is that currently, inspectors will check out a property if there is a complaint. They may also randomly inspect properties that are over four units, which would not include Watson's former home. However, if the tenant isn't home or for some other reason doesn't answer the door when the inspector comes, the inspector might not come back for years. If the inspector does find a tenant at home, violations are typically resolved within 120 days.

In L.A., the enforcement is harsher. The City might even take rent payments from landlords who don't make repairs. Tenant activists want to see penalties like this put in place for Long Beach landlords, but Long Beach officials have argued that it won't work. Councilwoman Suzie Price said it was not "legally or fiscally possible."