Memorial Day Weekend Planner: 24 Things To Do In Los Angeles 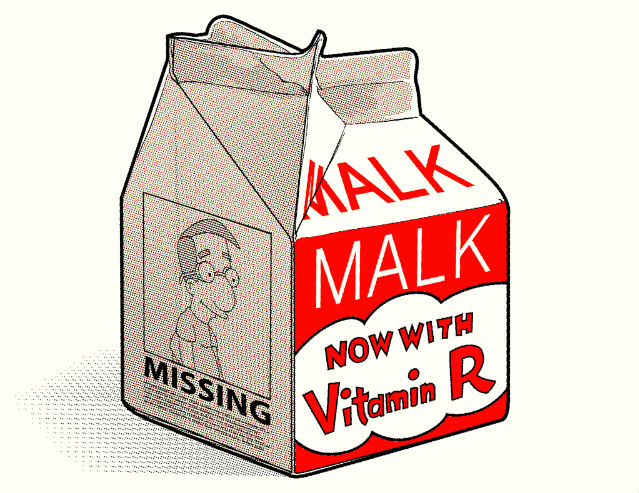 Gallery 1988 (West) presents 'Fictional Foods,' a show of new work from Joshua Budich. (Image: Courtesy of the artist and gallery)

LAist gets a lot of event announcements, and we comb through them all to bring you a carefully curated list of what’s happening in LA this Memorial Day Weekend, including these 24 events. Don’t forget to check out our May Guide, too, for other suggestions. We’ll be back on Tuesday to help you plan the week ahead.

COMEDY: There are two awesome shows at Nerdmelt on Friday night. Television: A Reunion (20 Years Later) is at 7 pm. Imagine all the stars of Friends getting back together to share stories and reminisce about the show—except that no one could show up in person—and their places are taken by great comedians. Tonight’s cast features: David Blue, Brian Farrell, Chad Fogland, Dean Haglund, Gina Ippolito, Janie Haddad Tompkins, Ed Salazar, Steve Benaquist, Jim Bruce and host Paul Goebel. Tickets: $8-$10. At 9 pm at Nerdmelt is Andy Kindler's Particular Show with guests Garfunkel & Oates, Todd Glass, Kate Berlant, Jen Kirkman, Rick Shapiro and James Adomian. Tickets: $8 in advance, $10 at the door.

ART: Gallery1988 (West) presents the show Fictional Foods from artist Joshua Budich with an artist’s reception from 7-10 pm on Friday night. He combines pop culture and fictional foods like the Wonka Bar, Popeye's Spinach and Lone Star Beer. Budich’s work will remain on view at the gallery through June 6.

FILM: The Academy continues its film series This is Widescreen at the Goldwyn Theater with a SuperScope double feature. At 7:30 pm, it’s the Don Siegel-directed Invasion of the Body Snatchers (1956, 80 min.), followed by Fritz Lang’s final American film, Beyond a Reasonable Doubt (1956, 80 min.) at 9:05 pm. Tickets: $5 general admission/$3 Academy members and students with a valid ID. Doors at 6:30 pm.

MARKET: The Odd Market is a new, independent bazaar with 200 vendor booths taking over the South Lawn of The Autry in Griffith Park on Friday night from 6-11 pm. There’s live music and food available for purchase while you shop. Free admission. (It’ll be a perfect place to stop and chill while the 5 Freeway is jammed up for the holiday drive.)

FILM: The documentary Quiet Riot: Well Now You're Here, There's No Way Back screens at Arena Cinema in Hollywood this weekend. Written, produced and directed by Regina Russell, the film is a chronicle of the rise, fall and resurrection of the band. Drummer Frankie Banali hit a personal and professional crossroads when the band’s lead singer and his best friend Kevin DuBrow died in 2007. In 2010, “Banali realizes he must forge ahead and make a new life for himself and his daughter, and decides to reunite the band and try filling the immense void left by Kevin.” The band and director will be in attendance on Friday and Saturday nights for a Q&A after the 8:15 pm shows. Tickets: $12. 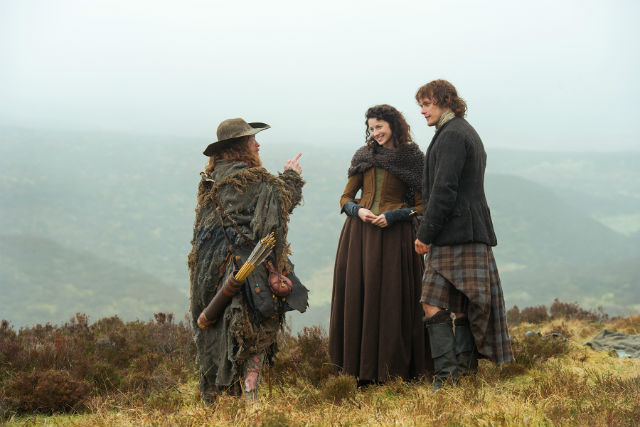 Costumes from the popular Starz TV show 'Outlander' will be on view at The Grove starting Friday. (Image: Hugh Munro, Caitriona Balfe and Sam Heughan, courtesy of Starz.)

OUTLANDER: A Tartan Affair is a new exhibition of costumes from the Starz romance-sci-fi-history-adventure show Outlander. More than a dozen costumes from the series’ set in Scotland will be on view at The Grove, and the show’s Executive Producer Ronald D. Moore will be on hand on Friday at 11 am for the unveiling. On May 31 (the last day the costumes will be on view),Outlander book series author Diana Gabaldon has a special appearance and Q&A scheduled at Barnes & Noble at The Grove at 2 pm.

WINE TASTING: Barnsdall Art Park kicks off the summer season with the Friday Night Wine Tasting on Friday and running through Sept. 4. Tickets sell quickly so book ahead. Barnsdall members get priority access and guaranteed entrance to one tasting. For $30, Silverlake Wine pours four selections of boutique, small production wines and you get to keep the glass. Bring a picnic or buy food from one of the food trucks at the park.

PHOTO: Women Can Build: Re-Envisioning Rosie is a photo exhibit on view at Union Station that features images of 15 modern-day “Rosie the Riveters” by Pulitzer Prize-winning photographer Deanne Fitzmaurice. They’ll be on view alongside never-before-exhibited photos of the original, WWII-era “Rosie the Riveter” photos from the Library of Congress. The exhibit remains on view through June 19. Free. 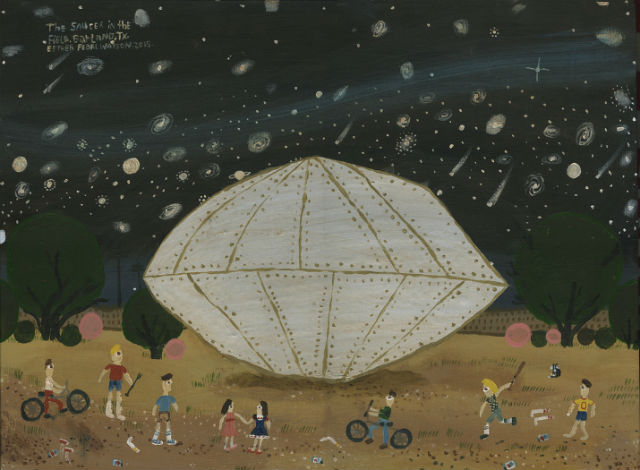 Flower Pepper Gallery opens the group show 'The Power of 3' this weekend. (Image: 'The Saucer in the Field' by Esther Pearl Watson)

FILM + BBQ: Heaven Knows What is the latest film from the Safdie brothers (Pleasure of Being Robbed, 2008). Cinefamily holds a special screening of the “fiction/verite fusion film” based on the experiences of street kid Arielle Holmes. The brothers blend actors with “fugitives, drug dealers, and street legends as it chronicles a young addict feeding her addictions and finding love on the sidewalks of Manhattan.” The BBQ and reception with directors Benny and Josh Safdie starts at 3 pm and the screening begins at 4 pm. The screening is free, but to help Cinefamily track attendance, guests must pre-register for "first-come, first-serve" admission. (The registration does not guarantee seats.)

RADIO SHOW: Ari Stidham and Zach Green team up to present a live comedy radio play Dick Duquesne: Tales of a Private Dick at The Open Space Theatre on Saturday at 8 pm. The show takes the format of a 1930s radio mystery, taken from the case files of the “semi-sober and world-weary” detective, Dick Duquesne. Tales of a Private Dick features live foley sound effects as actors bring the script to life for an audience. The show will be recorded for a later podcast. The first episode presented on Saturday night at 8 pm is "The Castrato" starring Chris Mathieu as Duquesne. Tickets: $5.

POOL PARTY: Sunblock is a new pool party at The Rooftop of The Standard, Downtown LA. Music by Kingdom, Total Freedom, Massacooramaan and NA Nguzu. RSVP for discounted entry or buy advanced tickets for guaranteed entry until 5 pm. Admission: $15 presale, $20 at the door.

ART: Gallery Nucleus presents The Goonies 30th Anniversary Tribute Art Show, with an opening reception on Saturday from 7-10 pm. Guest curated by Sebastien Mesnard, the show features new, tribute art work for all ages. The works will remain on view through June 7.

FILM: Cinespia at Hollywood Forever screens Dazed and Confused on Sunday night. Doors at 6:45 pm and the screening is at 8:30 pm. Bring low lawn chairs or a tarp and blanket to sit on, pack a picnic (beer and wine permitted) and listen to the tunes spun by the DJ before and after the show. Tickets: $14.

MAINOPOLY: MAINopoly: Taste of Main Street returns to Santa Monica for the second year on Sunday from 3-8 pm. Buy tickets and then use the corresponding MAINopoly dollars for tastings or drink specials at participating eateries, juice stores and coffee shops along Main Street. Proceeds benefit Summer SOULstice and Heal the Bay. This year, guests can also go directly to the "GO TO JAIL VIP LOUNGE" and Beer Garden sponsored by Shock Top, with hosted drinks, food, snacks, music, photo booth, games and more. You’re encouraged to dress up in a Monopoly or patriotic-inspired costume, and if you hit all the locations on the agenda, you can win a Taste of Main Street prize package. 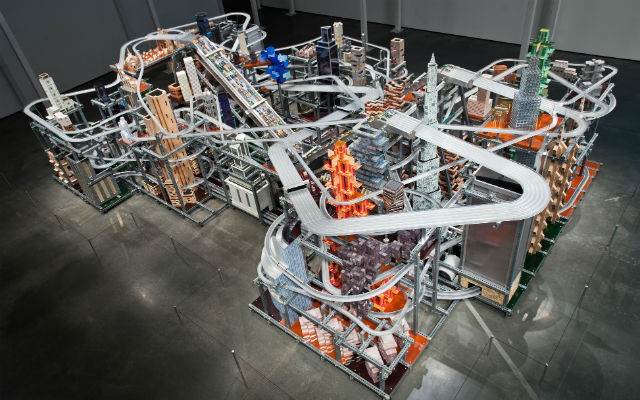 LACMA is free on Monday. Check out some of late artist Chris Burden's work, including 'Metropolis II.' (Photo: 2012 Museum Associates/LACMA)

ART: Admission to LACMA is free on Memorial Day, as part of Target Free Holiday Mondays. Might be a good time to check out the late Chris Burden’s works, Ode to Santos Dumont, Urban Light and Metropolis II. Museum hours are 11 am to 5 pm.

MOCKTAILS: 72 Virgins is a project of NewGround fellows Howard Seth Cohen and Saba Mirza who want to bring together Jews, Muslims and other people together in a safe space to socialize over hand-crafted specialty mocktails. Fight xenophobia and bust stereotypes at the 72 Virgins Mocktail Party on Monday from 6-8 pm at the Silverlake Independent Jewish Community Center. Tickets: $25-$25.