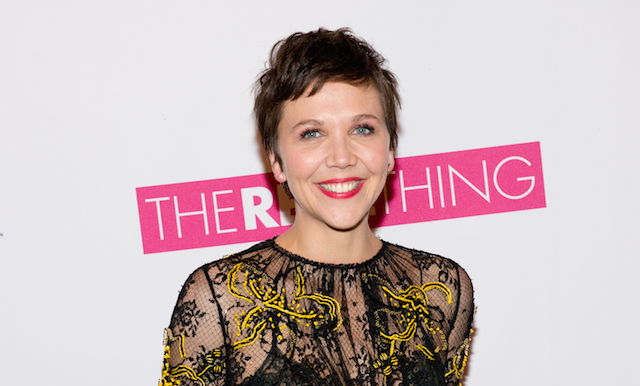 Maggie Gyllenhaal at the opening of 'The Real Thing' on Broadway. (Photo by Noam Galai/Getty Images)

Last month a brilliant Amy Schumer sketch came up with a perfect, darkly comic phrase to describe the Hollywood phenomenon of beautiful actresses being put out to pasture after they're deemed too old: "Last Fuckable Day." Julia Louis-Dreyfuss explained it this way: "In every actress' life, the media decides when you finally reach the point where you're not believably fuckable any more."

In the skit, Tina Fey says, "Nobody really overtly tells you, but there are signs." But someone in Hollywood decided to be very upfront with Maggie Gyllenhaal that, essentially, her last fuckable day has passed. Gyllenhaal didn't name names but she told The Wrap, "I’m 37 and I was told recently I was too old to play the lover of a man who was 55. It was astonishing to me. It made me feel bad, and then it made me feel angry, and then it made me laugh."

Hollywood's sexism and penchant for opening up "a hot can of 22" aren't anything new. But lately, there's been a lot of open discussion about all the ways big and small that the industry screws over women. This week, ladies called out Cannes' fashion policing BS, last year ladies who were afraid to out Cosby as a sexual predator for decades finally came forward, this month the ACLU alleged that Hollywood discriminates against female directors and actresses like Gyllenhaal are increasingly speaking up about double standards that deem a woman past her expiration date at 37 while a man at 55 isn't. Or as Fey said about men in the Schumer skit "They're fuckable forever. They could be a hundred and, like,"—here she makes an obscene gesture—"nothing but white spiders coming out but they're fuckable."

Gyllenhaal says despite the sexism, she is choosing to look on the bright side: "A lot of actresses are doing incredible work right now, playing real women, complicated women. I don’t feel despairing at all. And I’m more looking with hope for something fascinating."

And for what it's worth, we'd like to point out that sex symbol Mae West made her big screen debut when she was even older than Gyllenhaal. And here's the Schumer skit in case you missed it: