The L.A. Times Gives The New York Times A Taste Of Its Own Medicine 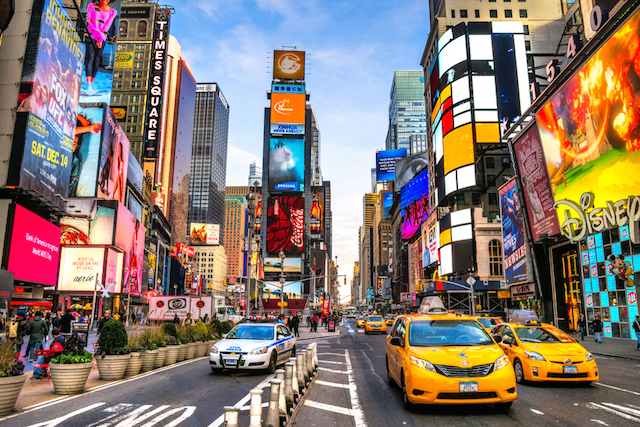 New York City boasts many amenities that one might find in other cities, including stores, cars, buildings. (Photo by Luciano Mortula via Shutterstock)

When the New York Times discovered Los Angeles a few weeks ago, it led many of us in drought-stricken, sunny California to say in unison: "New wha?" What city is this paper from?

Thankfully we have our own esteemed newspaper with journalists to look into the matter. You don't rack up 43 Pulitzer Prizes for nothing. And the L.A. Times found that not only was New York an actual city and not just a state, but that it wasn't a bad place to live in either.

Amazingly, they discovered that there was actual migration between the two different cities. "According to Census data, between 2008 and 2012 almost as many Angelenos moved to New York as New Yorkers moved to Los Angeles," writes the Times. Unfortunately they did not look in whether or not other cities throughout the United States—including Portland, Chicago, or Austin—experienced such migration, though we can safely assume nobody can afford to move to San Francisco.

In their investigation they also found that New York City offers many of the same features one would expect from a major metropolitan city, including an economy and public transportation:


Southern Californians are overcoming their fears of subway germs, and reversing the American directive to go west. They're finding that New York is more than a capitalist prison that runs on the fumes of the finance industry and nostalgia for CBGB. It now offers many of the lifestyle amenities that their hometown has boasted for decades.

We've heard some pretty gross stuff about that subway.

Angelenos considering the move would also be happy to know that New York also apparently has food. The L.A. Times also says they have Mexican food now, though we're fairly skeptical of that claim.


Not too long ago, Angelenos thought of New York as a veritable food desert; as recently as the 1990s, poppy-seed bagels were considered the lone culinary standout. These days, however, New Yorkers can sidle up to the juice bar 3 Roots in Greenpoint for liquid kale and wheatgrass, or stop by Sun in Bloom in Park Slope for a raw-food lunch.

Nikka Graff Lanzarone, an Angeleno who moved to New York after college, has even discovered an In-N-Out Burger replacement called Shake Shack. She notes that it's a close, if more expensive, second to her childhood favorite.

Although a mere 2,500 miles apart, both New York City and Los Angeles have a few differences in the physical environment. The Times reports that for a portion of the year (December to February, especially) temperatures can dip below 60° and that New York boasts a general abundance of water that can make Angelenos quite uncomfortable. "I've been here for 10 years but running faucets still makes my heart race," Anaïs Borja told the paper. No word on whether the rumors were true that water sometimes fell from the sky in New York.