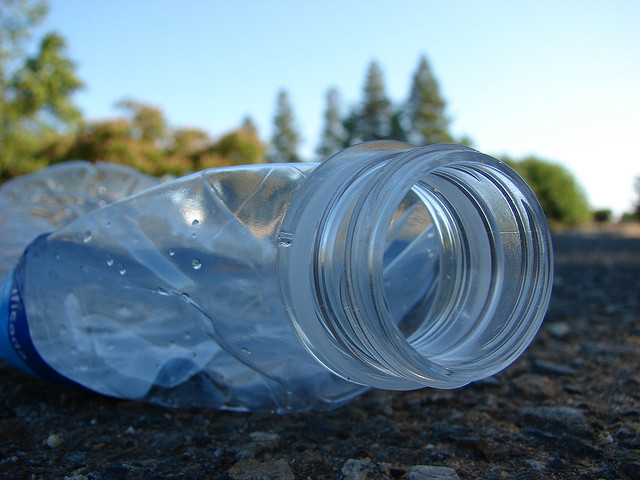 Bottling water from a drought-stricken California may sound like a bad idea to most people, but the CEO of Nestlé Water has no interest in stopping bottled water production in our arid state and would actually pump more water if he could. Maybe celebrities aren't the only ones who are inviting drought-shaming these days.

When asked by KPCC if he would consider moving the company's bottling operations elsewhere—as Starbucks recently announced it would—CEO Tim Brown responded, "Absolutely not. In fact if I could increase it, I would."

Brown argues that if Néstle—the second largest bottler in California—moved their production out of state, other companies would simply take their place and they are merely responding to consumer demand. Nestlé recently came under scrutiny for permit issues regarding their routine of drawing spring water from San Bernardino National Forest.

And while in a recent op-ed in the San Bernardino Sun Brown insists that bottled water is not contributing to California's drought, some water experts argue that bottling water still requires 30 to 50 percent more water than turning on the tap.

Jay Famiglietti, the top water scientist at NASA's Jet Propulsion Lab, told KPCC that he's concerned companies like Nestlé could be using and bottling thousands of acre-feet of water in the state:

An acre-foot [nearly 326,000 gallons] is enough water to supply an entire family for a year. So, in this time when we're being asked to flush our toilets less and less, we have to ask the question: Is this really an environmentally, ethically correct thing to be doing right now?

Another major concern for bottled water production is a lack of oversight for how the business affects the state's limited water supplies. According to the California Department of Public Health there are 108 bottled water plants in the state—five of which belong to Nestlé for their brands Arrowhead, Pure Life, Poland Spring, and Deer Park. And while the department regulates the plants and gathers data on water quality and the sources in use, there is no state agency that monitors how much water is used and how that affects local water tables.

Famiglietti does admit that Nestlé has a strong record for environmental stewardship, and Brown insists that his company is focused on improving water efficiency through better technology.

However, continuing to siphon water from a state in the middle of a major drought crisis and boasting of a desire to pump out more may not be the wisest move for the company.

Famiglietti also encourages taking a deeper look at our overall relationship with water:

I think that we also have, with the greater water crisis here that we face in California, a human behavior problem. We need to change our behavior with respect to water and our understanding of how much water we actually have available to us, not only in California, but around the country.