A cyclist was killed Wednesday afternoon after getting into a crash while riding through a crosswalk on a busy stretch of Hollywood Boulevard.

That particular crosswalk on Hollywood Boulevard has a blinking yellow light that alerts drivers that someone's crossing. It's not clear if the light was blinking at the time of the crash. We've personally seen drivers zoom through that crosswalk even when the light is blinking. However, LADOT says that cyclists should walk, not ride their bicycles through crosswalks.

People discussed the crash on a Reddit thread. One user shared a photo: 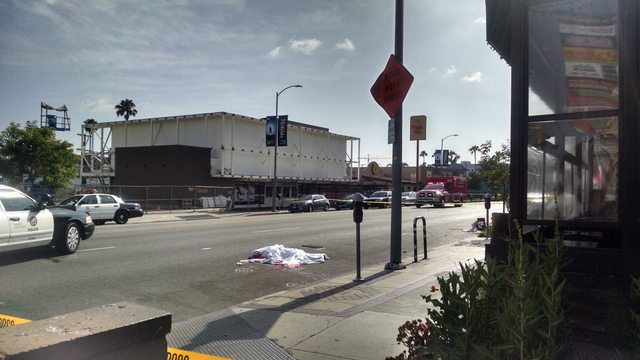 Another user TummyGrumbs claims he spoke to someone at the scene after the crash:

I was heading home and arrived just after this happened. Talked to a guy who said he was family w. the driver. Here's what he said: His family member (cant remember if it was cousin or what) was driving their 86 yr old GrandMa to the hospital. It didnt sound like it was an emergency. This guy said that the victim was riding their bike, and popped off the sidewalk onto the street, at which point the car hit him on the left side. I saw the car, and the left passenger wind sheild was all busted up, and the hood was busted as well. So it sounded, according to this guy that the vic was riding, not walking at the crosswalk. But who knows? [sic]

Some are using the crash to call for bike lanes on Hollywood Blvd.:

Confirmation of cyclist killed on Hollywood Blvd, with pictures, (thanks Gonzales brothers) We need those Bike Lanes pic.twitter.com/uC3XV2yVbO

On March 27, a driver struck and injured a pedestrian on Hollywood Boulevard near Whitley Avenue, according to KTLA.

We are in the midst of Bike Week in Los Angeles, a week-long event that aims to encourage cycling and build awareness about cycling and pedestrian safety.