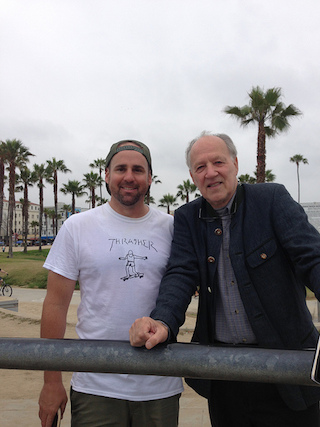 Werner Herzog at a skatepark, like a normal Angeleno (Photo by sam_frank via the LAist Featured Photos pool on Flickr)
This weekend Angelenos spent more energy than we'd care to admit ripping apart the latest dispatch from The Gray Lady. The New York Times was paying us a compliment but, like a lot of the Times' coverage, we had sort of mixed feelings about it.

We have better feelings about an interview that director Werner Herzog did for the website Work in Progress. We missed the interview when it came out this fall, but writer Matthew Dessem dug it up and shared a choice excerpt on Twitter, just as we were all collectively wringing our hands about this latest piece from the Times. Director Werner Herzog has been an Angeleno for two decades, and he's had mostly great things to say about the city since. In 2010, he explained his move this way, "I moved to Los Angeles because my wife and I decided we had to live in the city with the most substance in the United States. And I do not regret it for a second. Don’t be misled by the superficial glitz and glamour of Hollywood. It’s the city with the most cultural substance."

His interview with Work In Progress is really a gem and not just because it starts off with him explaining why getting shot is not really a big deal. Herzog explains why he's not only a convert:

"What I like about Los Angeles is that it allows everyone to live his or her own lifestyle. Drive around the hills and you find a Moorish castle next to a Swiss chalet sitting beside a house shaped like a UFO. There is a lot of creative energy in Los Angeles not channelled into the film business. Florence and Venice have great surface beauty, but as cities they feel like museums, whereas for me Los Angeles is the city in America with the most substance, even if it’s raw, uncouth and sometimes quite bizarre. Wherever you look is an immense depth, a tumult that resonates with me. New York is more concerned with finance than anything else. It doesn’t create culture, only consumes it; most of what you find in New York comes from elsewhere. Things actually get done in Los Angeles. Look beyond the glitz and glamour of Hollywood and a wild excitement of intense dreams opens up; it has more horizons than any other place. There is a great deal of industry in the city and a real working class; I also appreciate the vibrant presence of the Mexicans. In the last half century every significant cultural and technical trend has emerged from California, including the Free Speech Movement and the acceptance of gays and lesbians as an integral part of a dignified society, computers and the Internet, and—thanks to Hollywood—the collective dreams of the entire world. A fascinating density of things exists there like nowhere else in the world. Muslim fundamentalism is probably the only contemporary mass movement that wasn’t born there. One reason I’m so comfortable in Los Angeles is that Hollywood doesn’t need me and I don’t need Hollywood. I rarely involve myself with industry rituals and am rarely on the red carpet."

Werner seems to be more at home at film panels and Q&A's around the city than the red carpet and that's just how we like it. He has his beefs with Californians, and we can't really blame him for thinking we're a little kooky (after all, New Age babble makes up a large percentage of our favorite Overheard in L.A. submissions):

Of course, California is also where some of humanity’s most astonishing stupidities started, like the hippie movement, New Age babble, stretch limos, pyramid energy, plastic surgery, yoga classes for children, vitamins and marijuana smoking. Whenever someone wants to pass on “good vibes” to me, I look for the nearest empty elevator shaft. There are a lot of well-educated people doing very silly things in Los Angeles, like a man in my neighbourhood who one day casually mentioned his cat was in some sort of a frenzy, so he called the cat psychic. He put the receiver to his pet’s ear and for $200 the animal’s problems were solved. I would rather jump off the Golden Gate Bridge than visit a psychiatrist. Self-scrutiny is a strong taboo for me, and if I had to stop and analyse myself, there’s no doubt I would end up wrapped around the next tree. Psychoanalysis is no more scientific than the cranial surgery practiced under the middle-period pharaohs, and by jerking the deepest secrets out into the open, it denies and destroys the great mysteries of our souls. Human beings illuminated to the last corner of their darkest soul are unbearable, the same way an apartment is uninhabitable if every corner is flooded with light. The Spanish Inquisition was a similar mistake in human history, forcing people to disclose the innermost nature of their religious faith. It did no good to anyone.

He's got a thing about Anna Nicole:

But ranting about cultural decay isn’t very useful. The poet must not avert his eyes. When you look at the cultural shifts that have taken place over the centuries in the representation of female beauty, for example, someone as uncouth as Anna Nicole Smith becomes fascinating. The earliest representations of females are small statues from forty thousand years ago, like the Venus of Willendorf, with no face but a massive belly and breasts; this is apparently an idealized version of fertility and fecundity. Greek antiquity has its own well-known Venuses, and in late-mediaeval paintings we see fragile Madonnas, with porcelain-like skin and small breasts. Rubens’s Three Graces, by comparison, are real porkers. With Anna Nicole Smith, the ideal of femininity was transformed into comic-book proportions. When combined in one person, breast enhancement, Botox and lip augmentation make for a walking art installation. However vulgar she was, there was something of great enormity and momentousness about Anna Nicole. I wish I had made a film with her.

Related:
16 Werner Herzog Films You Can Now Stream For Free
Moby Champions Los Angeles As A Haven For Creatives