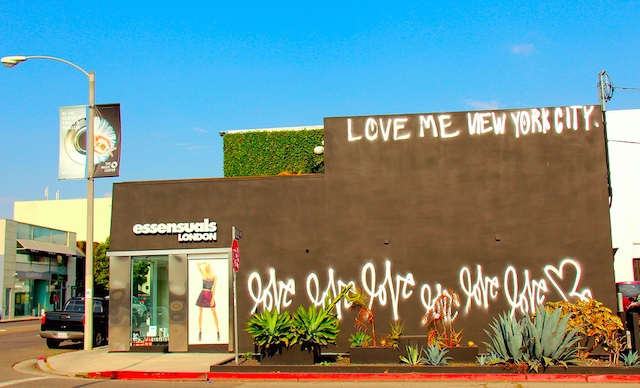 It's so cute when the East Coast Elites at the The Gray Lady notice us out here in the Best Coast. *waves eastward* Hi New York Times! Say hi to our friends at Gothamist for us.

Whenever the New York Times writes about us in Los Angeles, it always has the air of, "So I guess New York isn't the center of the universe after all" and comes with a sense of breathless wide-eyed wonder and condescension. We're all just a bunch of kale smoothie-drinking, beach-going, sitting-in-traffic bohemians living in the land of 24/7 sun under a haze of smog. Also, we're all from other parts of the country/state/world. Nobody who lives in L.A. was ever actually born in L.A. And oh, did I forget to mention that everyone has a screenplay they're working on?

Is this all Woody Allen's fault? Is our only cultural advantage really that we can make a right turn on red? Who even likes Woody Allen anymore aside from 24-year old screenwriting students who have never seen a movie made in a language that isn't English?

So which is it NYT? Is LA paradise or purgatory? pic.twitter.com/gY6kqvqpZ0

Get your bingo cards ready. Behold, today's Sunday Times did us all a solid and provided us not with one but two articles about California that, quite magnificently, work as companion pieces from opposite ends of the East Coast perception of California. It's like that photo from their drought story last month split into two articles through mitosis.

Californians are ordered to reduce water use, raising questions about what life there will be like in the years ahead http://t.co/hq5KG49G20

The first, "Los Angeles and Its Booming Creative Class Lures New Yorkers" from their Style section... well, where to begin? As discussed in Gothamist's own post on this from yesterday (where yours truly is also quoted), there's a whole lot to unpack in this #trendpiece about financially-cushy white people who can afford to move to Los Angeles and not work regular 9-5 jobs as they beef up their portfolio.

In New York, she said, she was so busy working to pay the bills that she often toiled from 5 a.m. to 10 a.m. as a production assistant for "Good Morning America," then from 10 p.m. to 4 a.m. as a cocktail waitress. Los Angeles, with its slower pace and cluster of young artists, has proved to be fertile ground for her artistic ambitions.

OK, that quote from Ms. Price kind of speaks for itself. But hey in L.A. nobody ever has to work two jobs in order to pay the bills!

There's also the cited fact that rent is cheaper in Los Angeles, even though our growing housing crisis is never mentioned, nor is the additional burden of owning a car—aside from the "endless traffic snarls."

There's also this cited excerpt from the musician Moby, who wrote in The Guardian: "Young artists in LA can really experiment, and if their efforts fall short, it's not that bad because their rent is relatively cheap and almost everyone else they know is trying new things and failing, too." Must be easy to write that when you're worth about $30 million.

And if any of you fearless Brooklynites do feel like making the plunge into the deep end, the transition period won't be long. We're just like home:

Here's a nut graf from wayyyyy down in the piece that actually sums up the piece quite nicely:


The idea that California could have it all—a pool in every suburban backyard, new crops in a drought, wild salmonin rivers now starved of oxygen—is fading fast. There is only so much more "pop per drop," as Ms. Marcus, the State Water Resources Control Board chairwoman, said, or neighbor snitching on neighbor, until the urban majority resists and demands a change in allocation.

In short, it's actually a thoughtful, if mainly spitballing column about how life in California could change in the future as this megadrought continues. However, it doesn't provide any answers as to what the "bearded young New Yorkers" will do when almond milk disappears when the Central Valley dries up. We'll just have to see what's in next week's Sunday Times.

Related: Where in L.A. NY Expats Settle to Feel Like Home