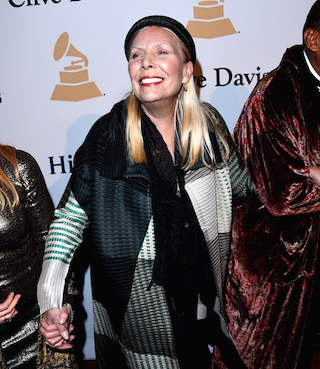 Joni Mitchell at a Pre-GRAMMY Gala on February 7, 2015 in Los Angeles, California. (Photo by Jason Merritt/Getty Images)
A close friend of Joni Mitchell's says the legendary rock goddess is unresponsive and in a coma.

TMZ reports that the 71-year-old "Big Yellow Taxi" singer's condition has gotten worse since she was rushed to UCLA Medical Center on March 31 after she fainted in her home in Los Angeles.

Leslie Morris, her close friend of 44 years, has filed legal documents to get a conservatorship over the star, saying that Mitchell's "so impaired as to be incapable of being assessed." Morris says she's filing it because Mitchell doesn't have any close relatives who can do it.

Earlier this month, there seemed to be a glimmer of hope for the singer as a tweet was sent out from her account saying, "Joni remains under observation in the hospital and is resting comfortably. Her progress is encouraging as she continues to improve each day."

In January, the music icon was announced as the face of Saint Laurent's fashion campaign. Most recently, she's had to put her singing career aside because she says she suffers from a mysterious condition called Morgellons. While medical researchers believe that it's more of a psychological rather than medical condition, the people who do have it believe that it causes fibers to come out of the skin and cause tingling sensations and lesions.

Update 4:35 p.m.: Mitchell's camp issued a statement about the singer's health on her website today, refuting TMZ's report that Mitchell is in a coma:

Contrary to rumors circulating on the Internet today, Joni is not in a coma. Joni is still in the hospital - but she comprehends, she’s alert, and she has her full senses. A full recovery is expected. The document obtained by a certain media outlet simply gives her longtime friend Leslie Morris the authority - in the absence of 24-hour doctor care - to make care decisions for Joni once she leaves the hospital. As we all know, Joni is a strong-willed woman and is nowhere near giving up the fight. Please continue to keep Joni in your thoughts. You may add your well wishes for her at the website WeLoveYouJoni.com